Round 8: Justin Gary vs. Alan Comer 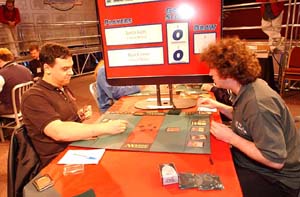 Your Move Games's enforcement arm, Justin Gary, kicked his Day 2 off with a relaxing match against the lord of the crazy limited deck, Alan Comer. Both sported double-bagged eyes, a sure sign of a late night and too early morning. Comer's crazier-than-usual hair seconded the motion. Gary was with removal-heavy red-black, and Comer had a rather pedestrian green-red build.

Before the match began, Comer discovered one of his sleeves had a huge scratch on it. He made an emergency substitution, wondering aloud if anything else was amiss. Gary gave a sinister laugh, smiling broadly as he said "Oh, I'd let you know."

Gary went first, but left the board clean. Comer made a Spellbane Centaur. Gary responded with Dirty Wererat. Comer hit and made a Springing Tiger. Gary added Chainflinger. Comer attacked with both, using Refresh to keep his Spellbane alive. Gary pitched Last Rites to regenerate. 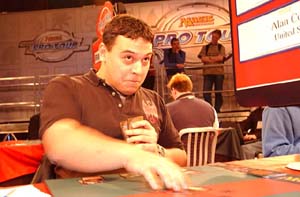 Gary fell to twelve. Liquid Fire took care of the Tiger but tapped Gary out. He took another three. Thermal Blast ended the Wererat. Anarchist returned Liquid Fire, which would have been much scarier if Gary hadn't been so low. Barbarian Lunatic axed the Anarchist, and Gary fell to five.

Liquid Fire took down the Centaur, and it looked like Gary might escape. Comer giggled as he put Dwarven Strike Force into play, hasting it up at the cost of Seton's Desire, and putting Gary at a measly one life. Gary untapped and Demised it away.

But while Comer drew basic lands, Gary was filling his board with two Cabal Pits and Barbarian Ring. Nantuko Disciple forced one a pit. Gary found a victory condition: Filthy Cur. Gary was frank. "It's not a thrilling scenario, I'll admit." An Ember Beast was non-spectacular, and Gary had Patriarch's Desire for the second. Eventually, the Cur and Ring finished Comer off.

Gary instinctively flexed his muscles after his surprising victory. Comer mulliganed a one-lander, and kept his six. Gary couldn't hide his glee. He turned to a nearby Chris Pikula and said "You know, I don't want to pump the fist..." Pikula cut him off, "I always pump the fist."

Comer started with a lackluster Skyshooter. Gary remained passive, watching Springing Tiger come into play. He hit four mana and made a Chainflinger. Comer swung in for five with Pardic Firecat. Firebolt and Chainflinger tag-teamed the Tiger. 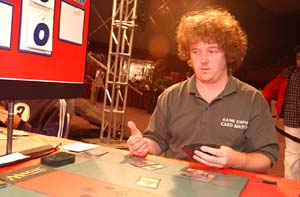 Comer kept up the pressure with Nantuko Disciple. Gary chose to Flame Burst it at end of turn rather than Firebolting to keep his mana free. That let him stop a Seton's Desire on the Skyshooter with Thermal Blast. Comer had a Flame Burst for the Chainflinger, but was clearly behind.

His Spellbane Centaur was answered by an Anarchist that recursed Firebolt. Barbarian Lunatic took down the Firecat. Comer's last card was a 5/5 Springing Tiger. Gary smiled as he Demised it. Comer pulled a very pathetic Dwarven Grunt. Gary untapped and used the full force of his body to windmill slam Vampiric Dragon.

Two turns later, the match was his. All he had to say was "Thank you, Jeff Fung", who refused to counterdraft the beast.