Round 8: Kai Budde vs. Dirk Baberowski 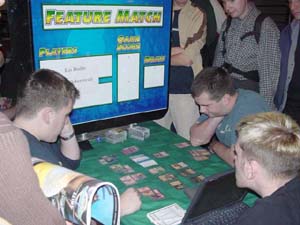 You might have heard of these players before. After all; they've both won more than one Pro Tour. Kai is perhaps the most successful Magic player of all time, with more major event victories than anyone, including PT Barcleona, PT Chicago, and Worlds 1999 but Dirk is no slouch either. He won PT Chicago 1998. The two are recently best known for playing on the same team (along with Marco Blume), Phoenix Foundation that won both the Pro Tour in Boston two weeks ago and the Pro Tour New York a year ago, not to mention the most recent Team-format Masters. They are also both on 7-0, sure of making day two but looking for a perfect record.

Budde had to start with a mulligan, then played a first turn Goblin Sledder. It kept swinging in and since it was the only creature in Kai's hand, he used Primal Boost to force it past a morphed Daru Healer as well. Dirk's hand wasn't exactly great either. He followed up the Healer with a 1/1 Doubtless One (killed by a Lavamancer's Skill) and then a Daru Lancer

Kai had managed to draw a couple of creatures and started to gain life with his Wellwisher. It seemed like the game could take a long time until Budde summoned Rorix Bloodwing. Baberowski had a Sandskin for it. Dirk dropped a Wirewood Savage which was immediately useful since Kai played Symbiotic Beast allowing Dirk to draw a card. Kai was on over thirty life at this point from the Wellwisher.

The Symbiotic Beast started to swing in, but Dirk had aVitality Charm allowing his Daru Lancer to kill it. The downside to this was that Kai got to put four insects into play. Budde had a Taunting Elf in play with a total of seven power worth of monsters in play. After Kai made a Flamestick Courier, Dirk had to use Erratic Explosion on the Elf to stay alive.

Kai had four insects, a Courier, a Symbiotic Elf, and a Wellwisher. Dirk used his Brackus to shoot the Bloodwing which blocked his Daunting Defender. He also had a Snarling Undorak and a Daru Lancer. Kai attacked losing a Courier and an Insect but dropped Dirk to four. 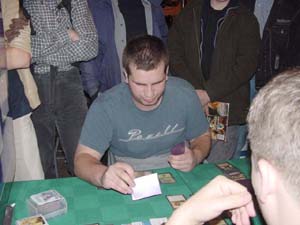 Baberowski made a Krosan Groundsaker and a Crowd Fazvorites and started to attack. More insects hit play as Kai morphed his Bloodhatch Nantuko to block making a total of eight insects. Even so it appeared that Dirk was getting back in the game. After all, Kais's guys were only 1/1, and Dirk now had a lot of fatties. He played Mobilization which sped up the task since it meant that his Cropwd Favorites and Daru Lancer could attack without tapping. Kai soon found his fifty point life total eroded, and he failed to topdeck Kamahl in time. It came to a point where all of Budde's insects had to block, and since Dirk had a burn spell it still wasn't enough to stay alive. It was a pretty amazing comeback from four life facing down nine creatures; but he drew a lot of consecutive lands at a point where any trick would probably have won him the game.

Dirk started Game 2 with a Taunting Elf, Kai with a Goblin Taskmaster and a Wellwisher. Both players made morph creatures on the third turn. Dirk decided to swap his Morphed Taskmaster for Kai's. He then tried to Erratic Explosion Budde's Morph, but unfortunately hit Shock and thus failed to kill it. He Kai used Lay Waste to destroy one of Dirk's lands; and followed up with a Rorix Bloodwing. This time Baberowski didn't have an answer of any sort this time and it was over in no time.

Dirk made a first turn Goblin Sledder but it only got one hit in before both players made a third turn morph monster. Budde played Symbiotic Elf which traded for the Sledder after Dirk attacked with his Morph monster. Kai then used Pinpoint Avalanche on a second Morph. Symbiotic Beast traded for Barkhide Mauler leaving the board position at six insects for Kai, and a Dive Bomber and Skirk Commando for Dirk. The players were playing very quickly. 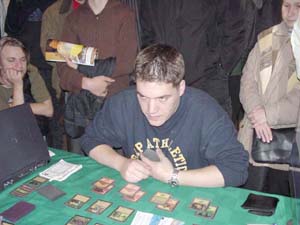 Budde used Vitality Charm on one insect to kill a Bomber, another Insect traded for the Commando, leaving the board empty except for three insects. As in the first game, Dirk began to make a comeback, with two further Morphs and a Mobilization. All Kai could add in the meantime was a Goblin Sledder and a Flamestick Courier. The Sledder traded for a Morph that turned out to be Venomous Brackus. Budde drew a Chain of Acid to kill the Mobilization which had only managed to put one Soldier into play. Kai made a Krosan Tusker rather than cycling it since he had plenty of lands. Dirk answered with a Krosan Groundbreaker. Budde made another gigantic Krosan – a Colossus, which was dealt with via Sandskin.

Baberowski then made a Crowd Favorites. It was certainly a battle of the fat, and it seemed like Budde had won it with Kamahl, but Dirk had a Solar Blast and Kai had insufficeint green mana to keep it alive. Time was called with Kai having a Tusker, a Colossus, and two Insects. Dirk had a Groundshaker, a Daru Healer, and the Favorites. Dirk didn't need all the extra turns, as he used the Favorites to tap Kai's fatties, attacked with the Shaker and the Favorites, and used Vitality Charm to give the Favorites trample for exactly enough damage.