If you're looking for the theme for this round, call it the World of Warcraft matchup. 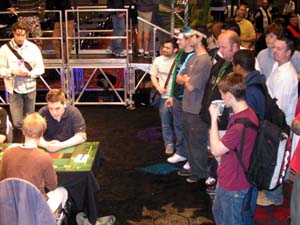 A sizeable crowd gathered around Kai and Simon.

Carlsson said at dinner Friday night that his playtesting time was radically diverted by the addictive online game in the last two weeks before the Pro Tour, but it hasn't affected his performance at all. He still ended up with a very solid White Weenie deck designed by the remnants of former Scandinavian superteam, Team Punisher. Kai has been known to game a bit himself in the online world of Azeroth, but the German Juggernaut tends to show a bit more restraint than some of his brethren and was instrumental in his design of the Black-White Kite Engine Control deck that has done so well for him thus far this weekend.

Both players are coming off a loss to the much-maligned White Weenie decks that seem to be posting the best consistent finishes across archetypes this weekend. In fact, Kai said Friday that he knew his deck was very good against control decks, but had some weaknesses against the better weenie decks in the format. Unfortunately for him, that's exactly what he's facing again this round.

Carlsson had a tough choice with his opening hand. The hand featured Isamaru, Hound of Konda, two Blessed Breaths and a Jitte plus a couple of two-drops as well, but only one Plains. The Swede chose to keep his hand, perhaps reasoning that because he was on the draw it would surely pan out.

To make the match interesting, a Plains appeared magically from the top of his deck on his first draw. The puppy met a Hero's Demise, but Kami of Ancient Law was able to bash for the first damage of the match. Carlsson followed that with his Jitte and an Empty-Shrine Kannushi, while Budde tossed Journey's Kite into play and chilled.

Carlsson gave the Kami a weapon and swung, countering Budde's Sickening Shoal for two with Indomitable Will, and dropping Kai to 16. Night of Souls' Betrayal got rid of the little cleric, but the Kami swung again for six this time, and Carlsson followed that with Hokori, Dust Drinker.

Hero's Demise from Budde sent the legged Winter Orb to Carlsson's growing graveyard, but Budde couldn't find another removal spell for the Kami and just like that, the Juggernaut was down a game. 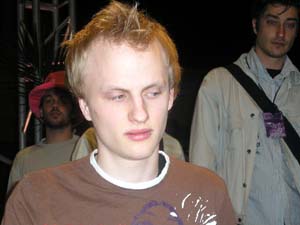 Simon's White Weenies proved too much to handle.

The second game kicked off with a flurry of action, as Budde used early pinpoint removal spells to try and stave off Carlsson's tempo until Kai's bigger spells came online. Tallowisp plus a subsequent Kami of Ancient Law and a Lantern Kami let Carlsson search out Cage of Hands and Indomitable Will while rebuilding his forces.

Mana screw soon became apparent on Kai's side of the board, as he stalled at two Swamps and a Plains, while staring helplessly at the Final Judgment, Eradicate, Hero's Demise, and Cranial Extraction. Unfortunately for the gathered fans, that's how the match finished, as Carlsson's weenies swarmed over the German and pushed him from 6-0 to the brink of elimination in two short rounds.