Round 8: Kazumasa Shiki vs. Shuuhei Nakamura 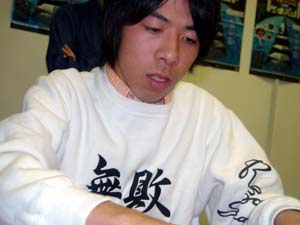 and Nakamura are the only two players without a loss in this tournament, and after this match only one of them will remain undefeated. Shiki hopes it's him; otherwise he'll have to take off his shirt that proclaims "Undefeated". Much has been made of Shiki's incredible accomplishments this season, which makes this match against veteran Shuuhei Nakamura all the more interesting. Nakamura certainly has the edge when it comes to experience, but Shiki has shown that he is able to put up solid finishes under pressure.

Shiki's Wizard Replica was countered with Condescend. Nakamura brought out Battered Golem, and Shiki had some late acceleration on turn four when he finally drew an island, playing Leaden Myr and Vedalken Engineer. Nakamura played Yotian Soldier, and Shiki brought out Arcbound Bruiser and Lumengrid Warden. With the help of Chromatic Sphere, Nakamura played a Skyreach Manta as a 4/4. Shiki had the answer, playing Trinket Mage to get Leonin Bola. It kept the Manta tapped down for a few turns, and then Nakamura got a second flying creature in Somber Hoverguard. Once again Shiki had the answer, and played Viridian Longbow. The Golem attacked and traded with the Mage, while the Hoverguard got through for three damage. Nakamura kept the threats coming, playing a Quicksilver Behemoth. Shiki had a good blocker in Auriok Siege Sled, but the Hoverguard got through once more. Shiki untapped, shot the Hoverguard, and moved the Longbow to the Myr. Nakamura killed it in response with Echoing Decay, but Shiki had enough mana to move it once more, and got rid of the 3/2 flier.

The Bruised blocked during an attack, and gave its counters to the Siege Sled to make it a massive threat. Nakamura played a 3/3 Manta, and it was forced to jump in front of the Sled. Shiki played another Trinket Mage, but had nothing in his deck to get. At this point, Nakamura was in trouble, as Shiki's Bola and Longbow kept his creatures from becoming a problem. Darksteel Gargoyle added even more to his dominant board, and it grabbed a Vulshok Morningstar to become a 5/5 indestructible monster, attacking until the game was over.

Shiki's first turn Leonin Bola was countered with Annul, and Nakamura played a Pentad Prism. Shiki had a Longbow, while Nakamura played Wizard Replica. Trinket Mage gave Shiki an AEther Spellbomb, and Nakamura went to the air with a Wizard Replica, followed by Spire Golem on the next turn. Shiki's Vedalken Engineer died to Lose Hope, as Nakamura's creatures came over for five damage. The Mage attacked back for two, and with only three lands Shiki's development was beginning to stall. Rather than cracking the Spellbomb and hoping to draw a land, he moved the Longbow to the Mage and ended his turn. He drew a land on the next turn, and put a Healer's Headdress onto the Mage. Nakamura killed it on end step with Echoing Decay, and attacked once more for five. Shiki's second Trinket Mage was countered when Nakamura sacrificed his Replica- he didn't know that Shiki had nothing left to search for in his deck. Still, Nakamura had a dominant board while Shiki was out of answers, and the game soon ended.

Nakamura had a first turn Longbow and second turn Pentad Prism, while Shiki played Trinket Mage to get a Bola. The Prism made Nakamura's Manta 4/4, and Shiki played Iron Myr, then gave the Bola to the Mage. This kept the Manta from doing any damage, and Nakamura's Yotian Soldier matched Shiki's Bruiser. Nakamura pulled ahead a bit with Baton of Courage and Somber Hoverguard, and put the Longbow on the Solider to kill Shiki's Iron Myr. Nakamura added yet another big threat to his side in Quicksilver Behemoth, and Shiki's Serum Tank tried to give him the cards to fight back. Nakamura's second Skyreach Manta would have meant the end for Shiki, although he kept fighting back by destroying the threat with Goblin Replica. Still, he had very few resources left to combat Nakamura's army, and conceded a few turns later.