Round 8: Kim Brebach vs. Merlyn Evans 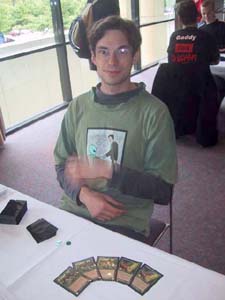 Sydney's Kim Brebach, the 2000 Nationals Runner-Up is paired against Merlyn Evans, Canberra's local hero. Despite being known as excellent players, they are willing to "talk shop" about playtesting regarding each other's deck. Kim made top 8 at GP Sydney in 2000 while Merlyn is heading off to the Pro Tour next month in Nice.

Kim wins the toss and begins, with the most played start in the history – Forest, Llanowar Elf. Merlyn drops a salt marsh. Kim drops an Island making his presence known as an opposition player. Merlyn, with a forest and a Zombie Infestation.... And so it begins.

Nothing from Kim 3rd turn as Merlyn dumps a Basking Rootwalla and a land to make a zombie,
Swinging for 3 and dropping a Call of the Herd. Kim matched the call with another but a Fact or Fiction gave Merlyn all he could have asked for, Flametongue Kavu, Couterspell, an island, Fire/Ice & Call of the Herd settling on the latter 3.The elephants traded and the lizard got through for 1 putting Kim on 16. Kim tried for the Opposition, bit it was countered by a Circular Logic put through the infestation with a walla. 2 pumped 'wallas & 2 zombies later Kim was on 6 & needing an answer. He drew, Iced Merlyn's Salt Marsh and drew again. Apparently he didn't find his answer.

Kim begins with a Shivan Oasis and Merlyn opens with a Yavamaya Coast. There is no sign of an elf from Kim, just a Shivan Reef. Merlyn is able to cast a Wild Mongrel without trouble as Kim replies with a Call. Aether Burst is the best solution for the elephant as the Mongrels swings for 2.

It's the only attack it gets, as it becomes the target of a Flametongue Kavu, however Merlyn has his friend – replicating him with a new mongrel. Kim drops another Call leaving an obvious 2 islands untapped – Merlyn, also with 5 mana attempts a Fact or Fiction drawing the counterspell. Much to Kim's chagrin it is Disrupted letting the FOF resolve, netting Merlyn a Circular Logic and a Standstill.

Kim attacks with the FTK but the mongrel not only block but becomes a 5/5 and still lives. Kim flashes back a Call only to have both elephants Aether Bursted out of the game. Merlyn, with the only creature on the board drops the Standstill and swings for another 2 (16). Kim has to crack the Standstill and does so with an opposition but Merlyn still has the circular logic and now 3 extra cards. A second Standstill is dropped and Kim realises that this game is fast slipping away. He notes that he never tried Standstill in his version of Infestation preferring the red burn to the blue bounce and card drawing. The second Standstill again gives Merlyn another 3 cards as a 3rd Call is met with a counterspell. 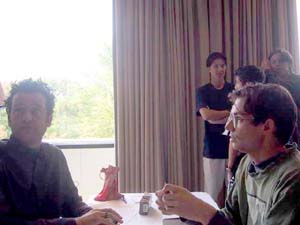 Finally, with a hand full of cards Merlyn drops a Zombie Infestation as well as a Call of his own. The Infestation doesn't last long as Kim's sideboard brings a kicked Thunderscape Battlemage into play, giving Merlyn just 1 zombie. The zombie, the elephant and the mongrel attack and the Battlemage trades with the zombie bringing Kim down to 11. The elephant is repulsed in Kim's main phase as he looks to be almost back in the game as Merlyn attacks for only 2 (9).

Not for long though as 2 more mongrels are played making 3 on the other side of the table. Kim is able to flash one of his calls and drop a Bird of Paradise, but on the alpha strike by Merlyn's Mongrels and a Fact or Fiction reveals the other 2 Fact or Fictions, a land, a Standstill and a rootwalla. Taking the 'walla and the Standstill, 2 'wallas are pitched to the mongrel blocked by the elephant. With nothing in the way of creatures (The budgie chumped a mongrel) and 3 Wild Mongrels with 2 Rootwallas on Merlyn's side the ever smiling Kim Brebach offers his hand to the victor.