Round 8: Kyle Goodman vs. Brian Tate 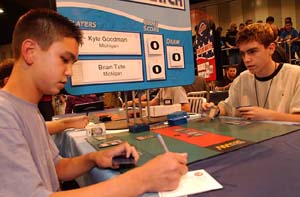 Kyle and Brian are friends from around the Detroit area, so they think it sucks to be sitting here in the feature match area together. Kyle came to the event from Detroit, where he's been playing Magic about three years, or around the time of Mercadian Masques. He qualified at a JSS Challenge Qualifier in Grand Rapids, Michigan with only thirteen people in attendance.

Brian is actually from Grand Rapids, where he also qualified for this event. Brian has also been playing since Masques. These two guys are good friends, and right now they're in a weird situation. One of them can draw into the Top 8 after this, the other one is going to need help.

"This is funny," Brian kept remarking around his laughter. "If I lose that would suck though," he continued. "I guess I still get some money though."

"This is serious," Kyle contended. "One of us makes the Top 8 here."

Brian has shown quite clearly that he's playing with blue-green madness. The Mongrel that hit the table on turn two is turned sideways and Wonder is tossed into the yard to increase the damage. An Arrogant Wurm joined the Mongrel a turn later. Kyle played a Cartographer to get back a Secluded Steppe he had cycled earlier in the game. Up to this point no one could really tell what he was playing, but now everyone knew it was Slide. The real problem for the moment was that he was getting beaten down by creatures and was unable to find the Slide to answer it.

Life total down to five, Kyle drew his card. He tapped his mana to play Wrath of God, and Brian responded by tapping one blue mana. Kyle held his breath in trepidation. If that single blue mana was for Circular Logic then this game was over. It wasn't, as Brian cast an Unsummon on his Mongrel. Kyle followed the Wrath with an Astral Slide and appeared to be taking control. A Slice and Dice was cast to kill the Arrogant Wurm that was played through the Mongrel. Mongrel and Wurm went to the graveyard, and a Roar of the Wurm token was killed through the judicious use of Astral Slide. 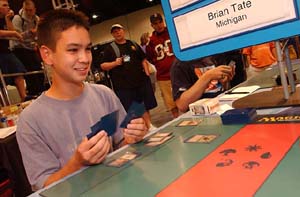 A second Slide cinched it. There appeared to be no way that Brian could play threats fast enough that they would matter. He placed a Rootwalla and a Merfolk Looter on the table as chump blockers, but they got removed by a cycled Slice and Dice. Game 1 ended with Kyle in complete control.

"That's game," Brian remarked as he picked up his cards.

Kyle pulled two copies of Cartographer and one Teroh's Faithful. Two copies of Boil and a single Auramancer went into his deck. Brian agonized. "I don't know what to sideboard," he remarked. He finally decided to remove four Basking Rootwallas and three copies of Wonder. What went in in their place? Two Counterspells, two Gigapedes, two Ray of Revelation and a single Upheaval went into the deck.

"I didn't do well here last year," Kyle commented. "I was playing that bad Wild Research deck. The kid who gave it to me was winning all the time with it, then he got banned for three years." 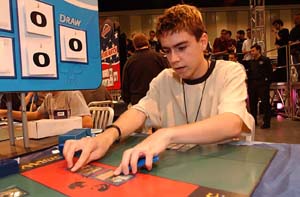 "Yeah, makes you wonder how it worked for him," Brian joked.

The joking ended a moment later when Kyle cast Boil, wiping out three Islands on Brian's side and pretty much encouraging him to scoop right there. "No Islands for you," Kyle jokingly exclaimed. He could afford to joke, his Exalted Angel and Teroh's Faithful group was having a little party over the head of Brian. Brian only had an Arrogant Wurm on the table, and each time it swung he was able to just take away the four life that Kyle had just gained.

A second Exalted Angel landed on the table a few turns later and the rout was on. Kyle no longer appeared to be playing Astral Slide, he was playing white beatdown.

"Good game," Brian offered, extending his hand to his friend.