Round 8: Lenny Collins vs. Andrew Corney 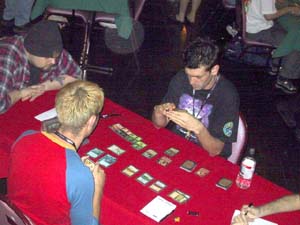 Corney's draft went mostly unnoticed by the table due to the blue/white drafting of Alex Shvartsman, who was getting a majority of the flyers. When chatting about the draft before the match, Corney had confidence in his deck, explaining that Collins knew very little about what his deck contained, where as he knew almost everything that was in Collins deck. Such attention to detail could prove to be the deciding factor in these matches.

Collins top heavy deck was slow out of the blocks with his first spell, a Chainflinger on turn 4 to match the turn 4 play of a Dreamwinder by Corney. Corney then proceeded to play the typical ground stalling fatties, backed up by flyer tactics of the blue white mage with another Dreamwinder and an Aven Flock. In an attempt regain control of the ground, Collins began to drop more fatties, with a Still Life and a Crashing Centaur entering play. When Corney tapped out to add another flyer, Aven Archer, to his side Collins seized the opportunity to remove the flock and cast Acceptable Losses, discarding a Cartographer at random from his hand. Continuing to press his stall, Corney cast a Psionic Gift on his Dreamwinder and sent the Archer in for 2 more damage dropping Collins life to 14. Collins began his assault by activating his Still Life and sent it into the Red Zone along with the Crashing Centaur and looked to gain the advantage when he cast a Muscle Burst after Corney blocked with his enchantmentless Dreamweaver. However Corney had the perfect answer, Shelter, one of the sleeper cards of the set, to give his creature protection from green and stop the trade.

Again it seemed like Corney would take the upper hand when he sacrificed one of his lands to cast Ghastly Demise on the Chainflinger and then Kirtar's Desire the Centaur stopping Collins offense dead in its tracks. Collins refused to yield and cast another Acceptable Losses on the Aven Archer and attacked with his activated Still Life which was met by another sheltered Dreamwinder. It was at this stage of the match when Corney made a small mistake by not attacking with his two Dreamwinders, as he didn't realize the sacrificed island allowed him to reach threshold, preventing Collins lone creature the Centaur from blocking. By only attacking with the single Dreamwinder Corney lacked the extra damage that would have finished Collins off later in the match. Collins slowly began to rebuild his board casting a Lithatog and a Stone Tongue Basilisk and suddenly it was Corney who was on the back foot. Sacrificing a few lands to the Tog gave Collins threshold and Corney was forced to start plowing chump blockers into the basilisk. As the turns passed Collins continued to draw creatures while Corney failed and eventually he succumb to the tog and the basilisk, despite Collins not sacking his land to the tog 2 turns earlier. 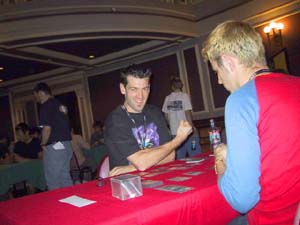 Corney chose to play first again in game two but it was Collins who cast the first creature with a turn 3 Lithatog. When Collins attacked into a turn 4 Mystic Zealot he joked that he would have to sacrifice all his lands to remove it from play, however he had a Muscle Burst to take it down. Again Corney showed the diversity of his deck when he dropped a swamp and slapped a Patriarch's Desire on the Lithatog and followed it up on his next turn with an Aven Archer. Unphased, Collins simply began to do what his deck does bust dropping fatties like Rabid Elephant and Metamorphic Wurm. Corney played a Dreamwinder and used it to trade with the Metamorphic Wurm, dropping Sphere of Law to help him deal with Collins burn spells. The Rabid Elephant was hard for Corney to deal with and it slowly ate away at his life total. His Archer was doing damage in the air, but it just wasn't doing enough to keep up with the Elephant. Corney played Auramancers to help dig back the Patriarch's Desire but he needed to cast it on a Krosan Avenger, as the threshold ability would kill him off quickly. Throwing creature after creature in front of the Elephant Corney dug deeper into his deck looking for something that could deal with it, but he could not find anything. Again Collins gave Corney extra chances by not realizing that a Sylvan Might in his graveyard could have been cast a few turns earlier for the kill but it made no difference in the end.