The first feature match of Day 2 features a couple of new faces to the Pro Tour as relative unknowns Jon Finkel and Nicolai Herzog joined me at what they deemed "the cool table," clearly due to my presence. These young players were a little overzealous as they approached the feature match area before the feature matches were even announced, but it appeared that the coverage department was willing to indulge their whims and gave them a little taste of the spotlight. Apparently, these two knew each other somehow, as they struck up a bit of conversation upon being seated.

"Was it you who I wished a happy new year or a happy birthday or something and I had to translate it into Norwegian for your facebook?" Finkel asked Herzog as he started shuffling up for the first game.

"I got kind of bored. I just remember being really impressed with myself," Finkel admitted. It really is the little accomplishments in life that bring the most enjoyment.

As you frequently see at foreign Pro Tours, the local currency was used to determine who would play first. Since heads and tails is completely subjective on a coin with no head on it, they decided to name the sides of the coin in another way.

"Ten or other?" Finkel grinned at Herzog.

You can just picture the coin, can't you? 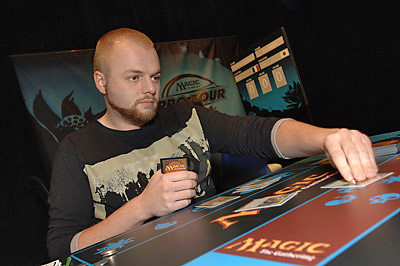 Nicolai Herzog has some experience in the feature match area. Both players began the first game jockeying for an early board advantage. It appeared that Herzog was gaining the early advantage with an active Cenn's Tactician and Goldmeadow Harrier to Finkel's Deeptread Merrow and Stinkdrinker Bandit. A third-turn Kinsbaile Skirmisher allowed Herzog's Harrier to beat in past the Bandit. Finkel couldn't block the newly 2/2 creature thanks to the threat of the Tactician, so he just let the beats start coming.

Fortunately, though, Finkel had a Whirlpool Whelm on Tactician in response to the Tactician adding a counter to the Skirmisher at end of turn. And even more fortunately, he had the Spellstutter Sprite to keep the Tactician from ever again seeing the light of day. All Herzog could do was shrug and play the Order of the Golden Cricket he had just drawn. The Order immediately took one for the team and traded with the Stinkdrinker Bandit on the following turn. Finkel then added a Fencer Clique to his air force, thereby tying up the Goldmeadow Harrier until a better target came down.

Herzog kept up the offensive and sent his 3/3 Kinsbaile Skirmisher in again, dropping Finkel to 12. A Knight of Meadowgrain followed immediately, and Herzog was in a great position to run all over Finkel's lackluster defense. Unfortunately for him, Finkel brought a Turtleshell Changeling in to play keeper, and none of Herzog's men could get through the defensive all-star.

At this point, Finkel had two cards in hand to Herzog's four, but the Turtleshell Changeling had really gummed up Herzog's ground pounders. Despite being unable to punch through for any damage, Herzog was content to just gain some life by attacking with his Knight of Meadowgrain into the big turtle. Post-combat, though, a freshly cast Plover Knight came down for Herzog and prepared to loom over the skies.

Finkel broke out the big guns with a Profane Command to remove the Plover Knights as well as hitting Herzog for 3. That combined with an attack from the Fencer Clique and Spellstutter Sprite put him ahead 11-12. Not to be outdone, a Glarewielder from Herzog took Finkel's two blockers out of the equation and allowed Herzog to knock him to a precarious four. With Finkel's biggest attacker negated by Herzog's Harrier, things looked pretty bad for him. That is, until a Mirror Entity showed up. Now, all of Finkel's men were his largest attacker.

Herzog tapped Finkel's Turtle before untapping for his turn and then went fairly heavily into the tank before deciding to lock down the Fencer Clique as well. With the major defensive threats out of the way, it was time to send in the team. That attack allowed Herzog to eat Finkel's Spellstutter Sprite and Deeptread Merrow at the low cost of his Glarewielder. Finkel was now down to two life and behind in men. He was going to have to commit more to the board soon, which would effectively neutralize his Mirror Entity. He was playing blue, though, so maybe Faeries would come to his rescue. He thought for a minute and simply passed the turn, leaving all his mana available.

Now it was Herzog's turn for a dip in the think tank. Any time you see a player with a board disadvantage pass the turn with a large amount of open mana, you get a bit leery. Sure Finkel had a Mirror Entity, but there had to be more that just that going on. Herzog ultimately sent his men in and used his Harrier before blockers were declared to tap Finkel's Turtle.

Faeries to the rescue! Finkel plopped a Scion of Oona into play, allowing his Faerie Turtle to stay untapped as well as making his Faerie Soldier, Faerie Wizard, and Weird (I'll say) Faerie that much bigger. Things were not looking good for Herzog. He had Finkel to 2, but now his men were left vulnerable, and in combat. Finkel usually known for lightning quick play slowed down immensely, going through all the possible blocking permutations, as well as considering Herzog's remaining cards. Eventually, he found a series of blocks that wiped Herzog's board, save for his Harrier, and left Finkel himself with a Mirror Entity and the devastating Scion of Oona. Finkel's remaining two cards were a Paperfin Rascal and a Nightshade Stinger, which could be however large Finkel's Mirror Entity wanted them to be. Apparently, 7/7 was the right size, as Herzog flipped his hand of all Plains onto the table after Finkel's attack. Herzog gave his deck the peek of death and saw the Lash Out on the top of his deck that might have won the game for him on the following turn. Remember kids, never look!

"I always get these big dreams of using the Scion to counter something cool, and it actually worked out that time," Finkel laughed.

After the game, Herzog revealed that he had decided to use his Harrier the way he had because of the threat of Pestermite. Finkel quickly pointed out, though, that Pestermite can get around Herzog's play as well by just untapping whatever the Harrier locked down. Herzog immediately and begrudgingly agreed.

Finkels' deck came out of the gates just as fast as last time with a Deeptread Merrow on the second turn immediately followed up by a Paperfin Rascal. Finkel failed to win the clash, but he did get to see Herzog send a Goldmeadow Harrier to the bottom of his deck. More on that later.

Herzog didn't really get to do much during the first few turns, unlike last game, and at the end of the third turn, all he had to show for his game was three lands and a grip full of cards. Herzog managed to make his first real contribution to the game on the following turn with a Changeling Sentinel. Unfortunately for him, Finkel put him way behind with an end of turn Whirlpool Whelm that sent the changeling to the top of Herzog's deck. Finkel added another little beater to his team in the tiny, yet roguish, Nightshade Stinger. 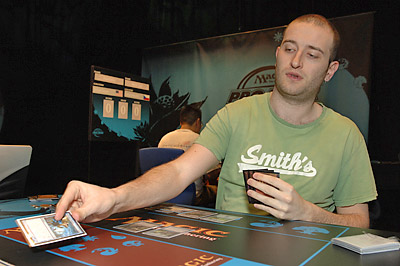 It turns out Jon Finkel is pretty good at Magic. Herzog drew his changeling and, rather than replaying it, decided to upgrade to a Wandering Graybeard. The Graybeard was much bigger than any of Finkel's men, and if Herzog got a chance to gain some life with it, it could easily start to turn the tide of the game. However, Finkel decided to play his own large man generator and Game 1 all-star—Mirror Entity. All Herzog could do was replay his changeling Sentinel and add an unfortunately late Cenn's Tactician to his side. He was at 13 life and facing an army of four mutable men and a Mirror Entity.

Finkel wasted no time pressing his advantage and sent his army in with six untapped land. Herzog did his best to try to get rid of the Mirror Entity by shoving his two largest guys in front of it and using his Tactician to block the Deeptread Merrow so he wouldn't die. Finkel had a Stream of Unconsciousness to keep his Entity alive, though, and, after Finkel tapped out to Mirror Entity for five, Herzog was left at 3 life with only a Changeling Sentinel to his name.

Fortunately for him, he had been trying to set up an opportunity to play his Thundercloud Shaman for a few turns, and now that Finkel was tapped out, he couldn't make all of his men 1/1 Giants, so the time appeared ripe. All of Finkel's men expect the Mirror Entity bit the dust, and without an army, a Mirror Entity is a little less broken. That seemed like bad luck for Finkel, but he was holding a Burrenton Bombardiers, which Herzog couldn't block. All Herzog could do was send his team and try to dig a little deeper with Surge of Thoughtweft, but his deck didn't cough up the miracle.