Round 8: Making the Cut

were probably more people here at their first Pro Tour than usual, thanks to the new PTQ prize structure. The Pro Tour can be an amazing experience, but on your first time out, it can be equally daunting. Eric Darland came prepared to enjoy his time in Hawaii (perhaps the most redundant line I have written all day) and found himself within striking distance of Day Two, which has got to make your first Pro Tour that much more special. I mean, sure it's a little less of that well-earned beach time, but heh, you'd probably spend it here watching the action anyway.

So the next step is to take down whoever dares to stand in your way! For Eric, this could be somewhat of a problem, because siting quietly across from him is the reigning Player of the Year, Kenji Tsumura. Did I mention it could be daunting? Thankfully for Eric, he has some great friends who were there to cheer him on. However, they couldn't agree on their advice. 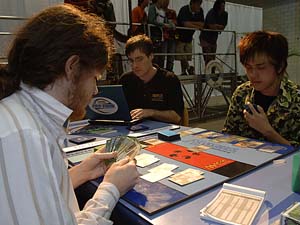 A spot on Day Two was in the balance

"Picture him in his underwear!"
"Worst advice ever!"

Kenji on the other hand, has great friends who instead help him build great decks. In this case, a five-color Greater Gifts deck.

When he led with a Farseek off of a Forest and a Plains, Eric assumed that Kenji had gone with the same deck he played at Worlds, GhaziGlare. Kenji's third turn Loxodon Hierarch looked threatening, but Eric had the Reciprocate for it once it had dared to tag him. What followed was much building of their mana based resources and a little feinting to left with a Gifts Ungiven and parrying to the right with numerous Hinders, Remands and Mana Leaks.

Eventually the board was tied down with another Hierarch from Kenji and one of Eric's Descendant of Kiyomaros. Eric tried to push forward with a Tidings, but Kenji punished him for tapping down by baiting him with Greater Good and then landing the telling double blow from Yosei with the assistance of Miren, the Moaning Well. Eric tried to stem the tide with a Meloku, but was again overwhelmed by a Kodama's Reach spliced with Goryo's Vengeance (Hindered) followed by the raw-dogged Goryo's Vengeance to Tap Eric down. This gave Kenji one turn to make the pull he needed to finish Eric off, and it came off the top in the form of a Recollect to rinse, lather and repeat.

Neither player did a great deal of sideboarding, choosing instead to fine-tune their arsenal in preparation for Game 2.

Kenji leapt ahead in the mana race thanks to his Green search spells, before having a couple of his Gifts Ungiven fall to a Rewind followed and a Mana Leak. The crucial turn came not long after, when Eric attacked with his 3/5 Descendant of Kiyomaro into Kenji's Loxodon Hierarch. All of a sudden, the judge was intervening to point out that Eric's hand size dipped to that of Kenji's when he followed his attack step with a Tidings, which left the Descendant with a mere toughness of three. 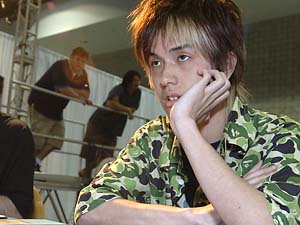 Tsumura didn't want his 2006 to start by missing Day Two

To make matters worse, Kenji then untapped and resolved a Cranial Extraction for Meloku the Clouded Mirror. It was almost all over when Kenji's Sakura-Tribe Elder suddenly flipped out and Ink-Eyes, Servant of Oni came down to snatch a Descendant out of Eric's graveyard. Eric managed to keep things under control with a Wrath the following turn.

The damage was done however, and Kenji came over repeatedly with that Sakura-Tribe Elder until Eric finally found the only two Jushi Apprentices in his deck to commence stabilizing. At this point, both players became acutely aware of the fact that time was beginning to run short. Not only that, but when Kenji sacrificed his Sakura-Tribe Elder, he found that he was running short on threats, and was even in danger of being decked by a flipped Jushi Apprentice.

A couple of turns later, Eric went for the throat and flipped up a Tomoya the Revealer with the help of a Tidings, and at the end of Kenji's next turn, Eric targeted him with Tomoya for four cards. Kenji eagerly snapped them up a fired off a game-saving Mortify to prevent Eric from drawing him out once he untapped.

Kenji then faked Eric out with a Yosei, before managing to come in at the very last minute with the double Kokusho, the Evening Star play to steal the match and clinch his spot in Day Two.