Round 8: Marc Hernandez vs. Svend Geertsen 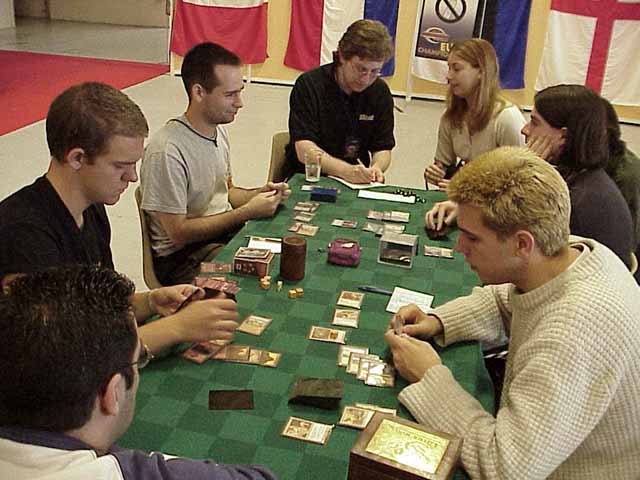 They can't all be close. Hernandez playing mono-white rebels knew it was going to be tough going against Geertsen's mono-red burn deck but he couldn't have known that Geertsen was packing additional heat in the board. Game one had Geertsen pillages 2 of Hernandez's Plains. Hernandez couldn't find another Plains in the match and his pre-mana-screw creatures were all burned out. A Lightning Dragon needed only 3 hits.

Game 2 might have been close if Geertsen hadn't used Flashfires to destroy all of Hernandez's four Plains on the fourth turn. A funny moment came when Hernandez asked for a judge to find out if Flashfires was reprinted in 6th. Turned out it was. Bummer. A Shock and Arc Lightning had burned off 3 of Hernandez's early creatures so all that was left was a lowly Sergeant when the Flashfires went off. Hernandez did draw a few Plains and went straight to 3 where Geertsen, chuckling evilly, Flashfired again. Hernandez had no game after that, and the match ended in a rout, 2-0. I commented after the match ended that they had to play one more time, because I had so little to write about. They obliged and Hernandez's deck gave him 10 Plains, but Geertsen would still win although that game was a little closer and Hernandez got to show off his black-border Crusades.