Round 8: Masahiko Morita vs. Jordan Berkowitz 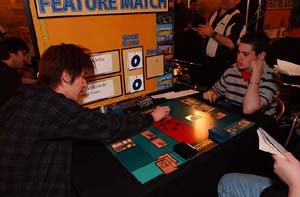 Jordan Berkowitz could not quite get his mind around the idea that he was sitting in the feature match area on day 2. "I never thought I would see my name at the top of the standings and have it not be at a PTQ!"

Jordan has qualified for every Pro Tour this season the hard way. He has won five straight PTQs—including one for Yokohama that was looking to be superfluous as he faced off against the only other 7-0 player in the tournament Masahiko Morita.

Masahiko is a four-time Grand Prix finalist and a member of PS2, the team that is waiting to take on 2020 in the finals of the Masters on Sunday. He is playing a mono-red goblin deck that was designed by Tsuyushi Fujita.

Two players who are not even qualified for this event designed Jordan's deck. Unheralded deck designer Roger Sorino created the core of Jordan's beast deck which is meta-gamed with four main deck Avarix—most others are sideboarding it—and abuses Canopy Crawler. Greg Weiss, Jordan's regular playtest partner called Jordan at 1am on Friday morning imploring him to add Wirewood Elf to his main deck.

Had I walked past this match in the early turns I would have assumed I had stumbled upon a money draft. Jordan's turn two Wirewood Elf was answered by Masahiko's Sparksmith. Jordan used the elf while he had the chance to make a turn three Canopy Crawler showing Thoughtbound Primoc, Tephraderm, and Krosan Tusker. 5/5's on turn three can't be bad! 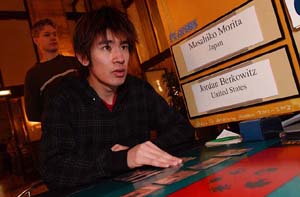 Masahiko played a Piledriver and killed the elf to fend off Tephraderm for a turn. Jordan bashed his opponent down to 13 with his monster and played a Thoughtbound Primoc—I don't know that there is a single wizard in the entire field. Masahiko dropped to 11 when he Solar Blasted and shot the Canopy Crawler with his Sparksmith—Blastoderm it aint! The match continued to have the look and feel of an Onslaught Limited event.

Jordan last two land drops came into play tapped so the Tepraderm would have to wait and he played another Crawler showing the two beasts not scratched out on his opponent's score pad. At this point the only change in Jordan's life total was a single point from Wooded Foothills. When Masahiko played Skirk Prospector and a Clickslither he could let the insect and the Piledriver attack unscathed and he went to a relatively safe 15. On the other side of the table his opponent went to 6 when he shot down the bird beast.

After a Prospector chump blocked the 4/4 Crawler, Jordan was finally able to play the long threatened Tephraderm. Masahiko started throwing everything he had at Jordan and played another Sparksmith and another Clickslither sending in everyone except the inactive Smith. Tephraderm tried to eat the Piledriver but the Clickslither was hungrier and Jordan took a hefty 9 points and the life race drew even at 6 all.

Jordan who had seemed confident early in the match was starting to get nervous, "God, I got the best draw I could get and I still don't know if I am in this. This match-up is impossible...except if I draw Baloth or Cliffs—that would end it."

Jordan sent the 'Derm across the table and a Sparksmith jumped in its way and he played his Krosan Tusker. Masahiko looked at his two Clickslithers and remaining Sparksmith and glumly passed the turn back to the former JSS standout.

Jordan thought for a long time before his next attack step. He kept picking up his cards and thinking about his potential attacks running the various scenarios through. Eventually he decided upon sending the Tusker and Tephraderm to see what happened. Now it was Masahiko's turn to consider his options and look for the best possible block. There didn't seem to be any that were very good and he chumped the Derm with Sparksmith and sac'd it to his Clickslither to attempt to kill Krosan Tusker. Jordan chose not to pump his Tusker surely respecting the possibility of another Clickslither.

It didn't matter. When Jordan drew the aforementioned Contested Cliffs they reached for their sideboards.

Jordan: "If he chooses to play first this game do I get to change the direction of the play mat? I am so uncomfortable."

Jordan brought in 4 Gempalm Incinerators and 4 Broodhatch Nantukos. He took out his Avarix and a handful of other expensive beasts. Masahiko brought in Tephraderms of his own and a Rorix.

Masahiko mulliganed twice which presented Jordan with a dilemma, "This is getting interesting. I was definitely going to mulligan before but now..." When Masahiko stayed on five cards, Jordan agonized for a moment and then decided against it. A quick peek at the top few cards before shuffling his hand back in prompted a "Goddamnit!"

Jordan pleaded with his deck, "C'mon stay on six deck...stay on six." He could not stay on six with only a comes-into-play tapped land, "For the love of god!" Jordan's deck does not mulligan especially well—especially with Canopy Crawler as a feature player. His five card hand was little better with a Tranquil Thicket as his only land. He had some cheap spells including Thoughtbound Primoc and Broodhatch Nantuko and decided against going to four. 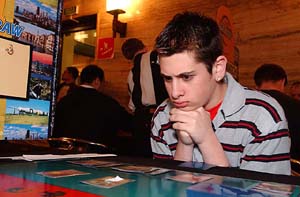 Masahiko offered no early pressure playing only lands for three turns. Jordan drew into a Wooded Foothills and a Contested Cliffs and was able to play his Primoc. Masahiko missed land number four and had no play either—his hand was all Goblin Goons and Shocks. Jordan also missed land number four but played his second Primoc after coming over for two in the air. Before the turn came back to him, Masahiko double shocked the freshly baked flier.

Goblin Goon hit play the following turn but a Broodhatch Nantuko presented a logistical nightmare. Jordans still stuck on three lands but he kept drawing Shocks instead. With his Primoc getting in for two a turn it wouldn't be long before Masahiko would be in burn range. Masahiko played a Tephraderm and another Goon but his game was not going to be decided on the ground with a Baloth joining the Broodhatch at the gates. Primoc did 12 and four Shocks finished him off.

Jordan is now the only undefeated player in the tournament at 8-0.