Round 8: Masahiro Kuroda vs. Masahiko Morita 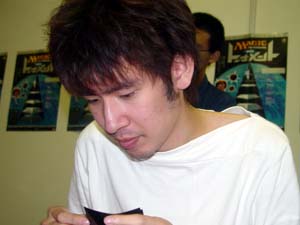 years, Japanese players had found many appearances in Pro Tour top 8s, but had failed to bring the big trophy home. Masahiro Kuroda changed all that. As the first Japanese Pro Tour winner, a lot is expected of him today. His performance so far has been excellent. But his fortunes turned foul as he faced his fellow Team PS2 partner, Masahiko Morita, himself one of Japan's long time greats. Neither player was happy to face his teammate this early in the tournament.

Morita won the die roll and elected to go first. Kuroda's black deck took the offensive, dropping Chittering Rats, a Myr Retriever, and a Myr Servitor. Kuroda needed to stabilize, and laid down a Leonin Sun Standard, Guardian Idol, and a Spikeshot Golem. Although he only had one plains to activate the Sun Standard, given time he could eliminate Kuroda's army with the Spikeshot Goblin. Kuroda knew this and maintained his cool face. He attacked and brought Morita down to 15. Kuroda also reinforced his board with a Myr Retriever, hoping that its recursion ability could prevent the Goblin for ravaging his board.

But Morita's deck offered up the goods in the form of a Cranial Plate, turning the Spikeshot into a menace. Kuroda played another Chittering Rats, hoping to further stunt Morita's development, but Morita found another plains and had put enough beef and direct damage on the table to throw off his opponent's momentum. The veteran Morita held an Awe Strike and Stand Firm in hand, prepared for Kuroda's potential funny business. Kuroda made a Myr Enforcer, but it quietly awaited the firing squad. Kuroda scooped.

Kuroda chose to play first and used a Lose Hope to slay Morita's Auriok Glaivemaster, sending one of his top cards to the bottom of his library. The pace slowed, as both players spent two turns dropping lands. Morita tapped out for a Guardian Idol, and the Pro Tour winner seized the moment by playing a Tooth of Chiss-Goria and a Nim Shrieker. Guardian Idol came over to knock Kuroda down to 18 life, but Kuroda was holding all the goods. He made a Myr Retriever, attacked with the toothy Nim Shrieker and threw a Contaminated Bond on Morita's Guardian Idol, dropping Morita down to 14.

Morita was simply outgunned by Kuroda's unstoppable damage. With no creatures in hand, he played a Stalking Stones and turned it into a blocker at the end of his turn. Kuroda untapped and played a Myr Servitor, allowing the Shrieker to knock Morita down to 9. Though there was no way he could win, Morita scored a moral victory by playing Grafted Wargear and attaching it to his contaminated Guardian Idol, swinging for 5. Morita knew that when the Guardian Idol stopped being a creature, it would die as the Grafted Wargear unattached, ridding himself of the Contaminated Bond. Inevitably, the Shrieker dragged Morita down.

Both players soberly shuffled up. Morita kicked the game off with a second turn Leonin Squire. In the tempo-driven format of MD5, his Grizzly Bear was nothing to sneeze at. Kuroda followed up with a Talisman of Impulse. Morita kept the offense up by playing a Soldier Replica on his third turn and attacked with the Squire, putting Kuroda at 18. Kuroda made a Chittering Rat, but that didn't slow down Morita in the least as he played a Cranial Plate and equipped the Soldier Replica. The Squire and Replica attacked. Kuroda was willing to let the Chittering Rat trade with the Leonin Squire, but an Awe Strike kept the cats on the table. Undaunted, Kuroda played another Chittering Rat and a Myr Retriever. The equipped Replica knocked Kuroda down to 13. Kuroda responded by dropping an Emissary of Despair and a Goblin Brawler, and allowed the Brawler and the second Rat to trade with the Soldier Replica. Kuroda then attacked for 6 in the air with his Emissary. 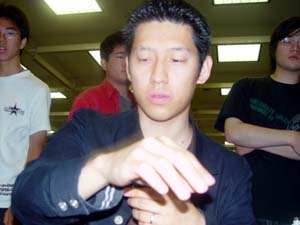 Morita would not be denied. He made an Oxidda Golem and attacked into the Emissary of Despair. Kuroda played a 2 counter Baton of Courage and killed the Oxidda Golem with his Emissary. Morita just played a Krark-Clan Stoker and equipped it with the Cranial Plate. Kuroda's hand was out of creatures, and his deck refused to offer him any more. Morita dropped his Leonin Sun Standard and started to swing for large numbers. A Myr Servitor attempted to stop the bleeding, but Morita's attack could not be stopped.