Round 8: Matthias Jorstedt vs. Daniel Zink 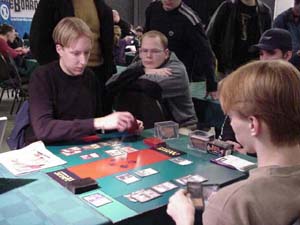 Daniel Zink vs. Matthis JorstedtRound 8 saw Pro Tour regular Matthias Jorstedt from Sweden matched up with the German National Champion Daniel Zink to see who could go unbeaten into day two. After some friendly banter and thorough shuffling a roll of the dice saw Zink choosing to play first with both players keeping their opening hands.

The game started at a furious pace with Zink coming out strong with a turn three Skywing Aven and turn four Cephalid Looter. Jorstedt answered with Patchwork Gnomes and a Painbringer and used some Sonic Seizure shaped direct damage to kill Zink's turn five Aven Windreader before inviting an Ember Beast to come and join the party. Zink seemed happy with the tempo of the game as he continued to serve with the Skywing Aven and added a Dreamwinder but Jorstedt had had enough and discarded cards to gain threshold by regenerating his Patchwork Gnomes and then used his Painbringer to kill the big blue beastie.

Zink drew and thought a long time before serving with the Skywing and then played Laquatus's Champion to slice into the Swede's life total!! Jorstedt was ready for this and sacrificed a land and then regenerated the Gnomes once again to give himself the lands in his graveyard to activate the Painbringer and kill the Champion boosting his own life total and after his attack reducing Zink to six life.

Zink was now in trouble and so he used Compulsion to cycle away a Caustic Tar which, although powerful, was too late to help in this match. Obsessive search during his own mainphase looking for answers spelt bad news and all he could do was pass the turn.

Jorstedt once again used the used Patchwork Gnome regeneration shields to put cards into the graveyard and used them to kill the Aven, the final blocker, and as he'd cleared the way for his guys Zink could find no response to the attack that killed him.

Zink decided to play and both players kept their hands. Two turns of lands and an end of turn Obsessive Search allowed Zink to cast a Crypt Creeper in turn 3 which was soon joined by a dirty Wererat but Jorstedt kept pace with a Patchwork Gnomes and Shambling Swarm and would have taken the lead in the arms race if Zink hadn't found a Syncopate to prevent his Ember Beast.

Jorstedt successfully cast a Faceless Butcher in the next turn and stole the Dirty Wererat which allowed him to attack with both his creatures unblocked and start the damage race. With only a Crypt Creeper in play Zink then decided to Morbid Hunger the Faceless Butcher taking him back to eighteen life and retrieving his rat then he attacked with the Creeper evening the life totals.

The Swede the beefed up his Gnomes with a Crackling Club and attacked unblocked showing that Zink obviously didn't want to discard any of his cards to regenerate the Dirty Wererat. In his turn he attacked with both his creatures taking the Swede to fourteen before reducing that to eight by casting his Laquatus's Champion with regeneration mana open. It suddenly became obvious why he didn't want to discard!

Jorstedt attacked with the Gomes causing Zink to think hard before deciding whether to block as there might just be a trick in the Swede's hand. He finally decided not to block and took three, down to nine. Jorstedt had nothing extra however and passed the turn waiting for Zink to make a move.

With a flair for the dramatic the move he made was to attack with everything! Jorstedt blocked the Champion using the Shambling Swarm counters to kill the big black monster, losing four life from the other two creatures but gaining his six back. Zink cast a Mesmeric Fiend and Jorstedt used the regenerating gnome trick to discard the fiery temper in his hand and play it with madness sending three damage to his opponent. The Swede then had to show his hand which consisted of three green cards but with no forests in play they were pretty useless. To whistles from the crowd Zink played Gravedigger and returned Laquatus's Champion.

Jorstedt was unable to do anything his turn and so the German attacked with everything. Jorstedt used the crackling club and the Patchwork Gnomes to kill a Gravegouger and but it was not enough as the recast Champion took him to one and an all out charge on the next turn finished him off.

For the final game Jorstedt took drastic action to remedy his green mana screw and sideboarded out all his green spells and forests replacing them with four plains and five white spells. Both players shuffled very carefully for the deciding game as mana screw was something neither player wanted to contemplate.

Jorstedt decided to play and drew seven cards including four of the white cards he had sided in. Two lands each and then a Mesmeric Fiend allowed Zink to see his opponents tech but he removed the Faceless Butcher nonetheless and made a note of the four white cards,

Jorstedt summoned a Mystic Zealot two turns later. A swampwalking Whispering Shade from Zink on his turn didn't block the Zealot which had grown to 3/6 with a Strength of Isolation. The Mesmeric Fiend was killed by a flame burst bringing the Faceless Butcher back to the Swede's hand and after a Shade attack brought the scores level at seventeen Jorstedt decided to use the Butcher to take the Wererat before swinging with his Zealot and establishing a lead once again.

The Shade continued to nibble away before the Butcher was dispatched with a Morbid Hunger evening the scores again. With nine minutes left in the round the two players seemed locked at a crucial point so Jorstedt played the Painbringer which had served him so well in Game 1 but Zink responded with a Stupefying Touch. This seemed to be a watershed moment as Zink swung with the Shade and pumped it to take a six life nibble from the Swede. Jorstedt passed but then used a Spirit Flare to tap the Zealot and dispose of the Shade. Zink kept the pressure on with summoning Laquatus's Champion for the fourth time in the match which meant he led the life totals 17/5. Jorstedt played a Shambling Swarm to provide a second way of killing the Champion as he had a Second Thoughts in hand but the German national champion decided not to attack and tapped six mana for Caustic Tar!

Jorstedt had to find an answer to the enchanted land and find some way of doing damage rapidly. He attacked with the Shambling Swarm and killed his own creature with a flashbacked Spirit Flare but the flashback cost reduced his life by a further three points and Zink finished him off by responding to the spell by activating the Caustic Tar.