Brother vs Brother: The Ruels

After sharing a dismal 2-3 opening in Block Constructed, the Brothers Ruel both needed to win out in order to make Day 2. Fate was in a cruel mood, however, and slotted them both into the same draft pod. Even in the best case, only one could advance.

Fast forward to Round 8, and both have 2-0'd their pod. Olivier put together a slick blue-red control deck, and Antoine a green-red-black aggro package. Just next door, also in an elimination match, sat Brian Kibler and Ben Rubin, shamefacedly shuffling up after going 0-2 to put themselves on the brink.

The first game was all haymakers. Antoine got an early Lord of Shatterskull Pass. Two turns before it would come online, Olivier traded in a board of Emrakul's Hatcher, Spawn token, Guard Gomazoa, and Sea Gate Oracles for a Hellion Eruption. Antoine dug in his heels and after the wave of 4/4's crashed against his board he was left with a very Lord of Shatterskull Pass. He untapped and brought him to max level, swinging in to blank Olivier's board.

But Olivier's deck decided he needed a break and fed him Narcolepsy off the top. The two cast and traded creatures, but Olivier again got the best of it with his OWN Lord of Shatterskull Pass. It quickly leveled to max and Antoine's deck refused his pleas for aid.

Game 2 started with mana difficulties for both brothers. Antoine had Evolving Wilds, but didn't want to waste it getting the Forest he needed for Overgrown Battlement. He missed on his next draw step, and was forced to dig out a Forest. Naturally, he drew another on the following draw step.

On the other side of the table, Olivier had a grip of Hatchers, Traitorous Instinct, and three Islands. He cast Sea Gate Oracle and greedily kept the Hellion Eruption offered him rather than a fourth Island. He showed Antoine how it was done by flipping his next card straight onto his lands: A mountain.

In the meantime, Antoine had brought back the Lord of Shatterskull Pass for another round. He only had a single Mountain, though, so leveling up was slow going. Olivier finally hit a fifth land and started playing Emrakul's Hatchers. Antoine hassled him further by enchanting Stomper Cub with Boar Umbra, trampling past the insignificant Spawn. After playing his second Hatcher, Olivier bit the bullet and put both 3/3's in front of the Cub, stripping the Umbra. He untapped and quickly flashed the Hellion Eruption, upgrading his board to six 4/4's.

Antoine swung with the Cub and took care of one of them, leveling his Lord to three and playing Wildheart Invoker. Olivier held back, playing Dreamstone Hedron and See Beyond. Antoine happily Naturalized the Hedron at end of turn, untapped, and found another Mountain to bring the Lord one level short of devastation.

That was just fine for Olivier, who winked as he tapped six: four for Traitorous Instinct, and two to put the stolen Lord to max level, swinging in for a brutal kill. 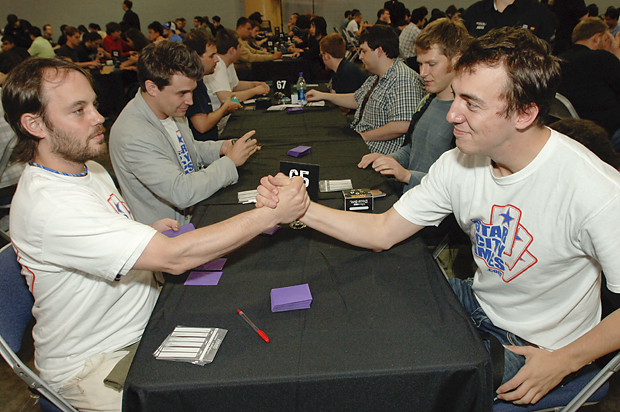