Round 8: My Team Part 17 vs. Lyskavermaden 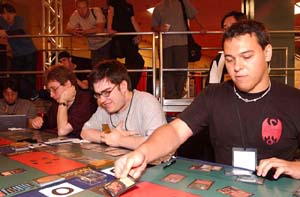 Lyskavermaden is a German team headed by Patrick Mello in the "b" seat. Stephen Valkyser and Mello have played together before - they finished fourth at last year's PT-NY. However, after a PTQ win from their third with friends, Mello and Valkyser picked up Pierre Kroger. My Team, Part 17 features PT-Tokyo Champion Zvi Mowshowitz sitting in the middle, and is flanked on the left by Alex Shvartsman and on the right by YMG's Justin Gary.

Mello made it clear early that he would be playing U/B in the middle, as that is perceived as a good matchup against U/W because of the discard spells.
Pierre would go into a green-based four or five color deck, and right would pick up everything but blue early on.

Zvi was very happy to get a Quirion Elf as his first pick out of Patrick's pack and showed 5cg from the start. Gary played the more traditional R/B on the right and picked up white later on in Apocalypse while Alex played U/W/b on the right.

This draft was well executed by the Americans, and struggled through by the Germans, as Mello openly appeared frustrated with his new acquisition.

After the draft, I ask Zvi what the key is to having 5CG beat U/W or U/B, and he responded with, "Fat, fat, and more fat! Don't let them have Dead Ringers or Flagbearers either."

Zvi's decks had excellent mana-fixers with 2 Lay of the Land, 2 Fertile Ground, Chromatic Sphere, and Quirion Elf. Patrick Mello, in the meantime was headstrong into blue and began picking up black and even dipped into red a bit in Invasion, when the US team failed to defensively draft a Shivan Emissary, and let it get to him. After this, Patrick got a Tahngarth and several other solid spells. The Apocalypse was very exciting, as there were many solid cards opened. Multiple Bobcats, Jilts, Urborg Uprisings, and Spectral Lynxes were opened along with Planar Despair, Life/Death, and Order/Chaos.

This draft favored the Americans slightly, but Justin Gary should run away with his match, as Pierre Kroger's deck isn't very good due to some pick mistakes after going against Mello's suggestions.

Stephen starts with a mulligan as Alex chooses to keep a hand with 2 lands, a couple of fliers and gets the jump early with a Lynx on turn two. Pilgrim comes down on Stephen's side and should stall up the ground, but look for Shvartsman to go to the air for the win, and on turn three, he starts, casting Coastal Drake. 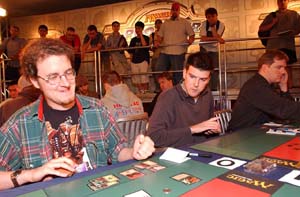 The German is stuck with some high casting-cost spells in his hand, as Savage Gorilla, Dead Ringers, and Plague Spores sit and watch Alex drop a couple more little guys, including a Thrush. Coastal Drake goes into the red zone again, and Marsh Crocodile makes a tough discard for Valkyser. It ends up being Plague Spores, and Thrush goes to work "porting" the forests of the German. Zombie Boa looked to put some pressure on Valkyser as it could kill the Knight, if blocked. Alex attempted a manacles of the German's Samite Pilgrim, but he thought it would not be a good idea, and proceeded to Jilt with kicker, killing Alex's Coastal Drake.

Alex was still offensive, bashing with his Boa and Crocodile. A Shackles a few turns later on Stephen's Samite Pilgrim made the German look for answers, but Alex's Honor Guard several turns later forces Valkyser into an awful position, and once Alex drops a Silver Drake, the game is over in a hurry.

Midway through the next game, Shvartsman with an empty hand rips a Recover, and gets his apprentice back into play.
This game was dominated by timely spells for the German, and answers from Alex. Stephen cast several card-advantageous spells this game, but when it game down to it, Alex had a good matchup, and Valkyser failed to draw many of his potent spells.

After Alex goes on the offensive for most of the game, Stephen is down to two, and Slinking Serpent comes back down after being Jilted, Because of Stephen's forest it could deliver the finishing blow.
Valkyser delivered one last attack, and Alex declines blockers, and the German gives it his all, casting a Gaea's Might and a Scorching Lava, but comes up two points short.