Round 8: Olivier Ruel vs. Kai Budde 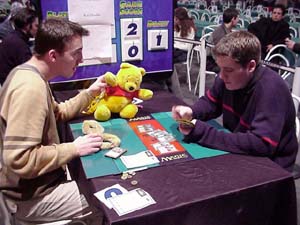 It is always the same thing at the end of a Grand Prix's first day. The big names always seem to float to the top and while some of them are battling for day two, others are already jockeying for a better position in the Top 8 race.

Neither of these two players needs an introduction. Well, if you must... Kai Budde has won more Magic titles that anyone can possible memorize and is quickly becoming the unchallenged example of perfect Magic playing. Olivier Ruel is one of the Worlds' best players when it comes to Limited. He is also a one-man laugh machine.

Olivier did his own Feature Match tag and even wrote comments on it. For example: "Mulligan Game 1." under his name, and "so lucky!" under Kai's name. He kept the second hand and showed his hand to cast a Land Grant.

With a mockingly smile Olivier played a Meddling Mage (locking Oath) announcing he knew Chris Pikula and Chris had signed his card.

The Mage was quickly joined by a Quirion Dryad but by now Kai had mana to block with his Village. Ruel played a Winter Orb lock up the mana and Kai seemed impressed by the Frenchmen's draws more than by the sounds of his mana pet stuffed animals (and things do get really spooky when Olivier sings along, I wonder how Budde can concentrate under those conditions).

Budde Impulsed for an answer but came out empty and Ruel's pain machine was gearing up. On the next turn he dropped a MegaBear and pumped his Dryad with a Gush.

The German finally blinked trying to Sword the Mage away, baiting a Force from Olivier. Then he went for the Powder Keg, baiting out the second Force of Will. With the German tapped out Ruel attacked him down to eleven and a draw phase later the German scooped.

Kai: "Those were some very impressive draws. I hope you don't draw like that on the other two games."
Olivier: "I always get good match ups when I play against you."
Kai: "This match is all yours! This is the match up I actually tested."
Olivier: "Is it? Great."

Kai handed Olivier some gum so sour Olivier tried to convince a judge to give Budde a warning because of it. Despite the German's assurances that it got better later on Ruel couldn't put up with it. 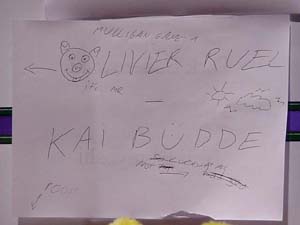 Yet despite all the hardship he had the time to hand me a paper with his sideboarding: two Wax/Wanes, three Interdicts, two Legacy's Allure and two Winter Orbs. Now that is nice.

He started of with a Brainstorm to hide two lands and then Land Grant showing Wax/Wane, Sleight Of Hand, Two Quirion Dryad, Interdict and Winter Orb.

Kai: "I wish I could draw Wastelands here."

He didn't get it but he played a Powder Keg and an Impulse while Ruel dropped a Dryad. Two Sleights later the Dryad waltzed into the Red Zone putting enough pressure to warrant a quick Keg explosion. The German finally found his much wanted Wastelands but Ruel had a Gush to save his dual.

The German took another hit from the Dryad, going down to twelve, and Olivier dropped a Legacy's Allure. The Keg blew but was immediately replaced by another. The French rebuilt his attacking force with Meddling Mage naming Counterspell.

A Swords took that of the little rascal and Ruel was back to his drawing board. He played a Portuguese Mystic Enforcer and they both butchered the Portuguese language trying to pronounce it! The German tried to counter but Ruel had the Force to support it and reach Threshold. Budde was two swings away from losing the match.

The Enforcer attacked once, the German drew a final card, while at six, and got an Oath. Too late.

Kai (scooping): "It is not working very well over here. Oh my god, you are a lucky man!"