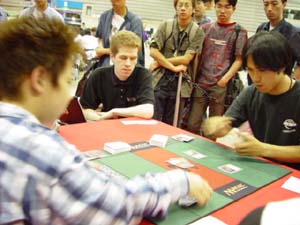 Osamu Fujita is a player on the move. Since his early days in the limelight as the glowering third member of Anchans, to his consistently strong singles finishes on the Grand Prix circuit, Osamu Fujita is proving that Tsuyoshi isn't the only Fujita in town. In face, he and Tsuyoshi are piloting the same deck this weekend, red-white Slide, along with Masahiko Morita, and all of them are doing well. Fujita is just one win from a perfect Day 1. His opponent, Yosiyuki Kawasima, isn't someone you'd recognize. He showed up for this weekend with just one bye and a homebrewed red-blue land destruction deck. He and his teammates refined the design that packs Misguided Rage, Lay Waste, Ark of Blight, and the mighty Annex into one cruel mana denial package. Arcanis keeps the deck in fuel and Rorix bats cleanup.

Both players started with some cycling, but the first action was Kawasima's Lay Waste on Fujita's plains. Fujita replaced it and added an Astral Slide, but that took a dive to Misguided Rage. Ark of Blight stopped another plains, and Annex took another. However, Fujita's deck had ample mana, and he was never far out of it. It helped that Kawasima had no pressure on him.

Soon he was back on double-white and playing out Silver Knight. Kawashima's morph had to stay at home. Temple of the False God and Exalted Angel followed for Fujita, and then Lightning Rift. Kawashima's Rorix Bladewing was late to the party. Fujita added an Eternal Dragon, and started to serve. Kawasima traded his Rorix for the Eternal Dragon and a cycled Secluded Steppe.

Kawashima needed help. He hired Arcanis the Omnipotent. It was a little late. Fujita dropped an Astral Slide to keep him busy while the Dragon soared overhead. Soon they were on to Game 2.

Fujita opened the second game with a turn-two Rift to protect against Kawasima's third-turn Misguided Rage. He followed up with Astral Slide, and Kawasima Annexed his mountain, stranding him at two land. Fujita made a Silver Knight, but it was stopped by a Wall of Deceit. Lay Waste set Fujita back even further.

Kawasima, meanwhile, got out Arcanis the Omnipotent. Double Lay Waste followed, leaving Fujita with just a Temple in play. Rorix Bladewing followed, and the game was Kawasima's.

Fujita was on the play for the final game, and he almost sent his opening hand back. He couldn't bring himself to, though, and they were off. Kawasima was first on the board with Ark of Blight. Fujita made a morph and watched one of his three white sources fall to the Ark. He replaced it with a mountain and played a Rift. Kawasima Starstormed away the morph before it could blossom.

Kawasima's next move was a Misguided Rage on the fifth turn. Fujita plainscycled his Eternal Dragon in response, hitting Kawasima for two, then he sacrificed his Rift. Kawasima further complicated things with a Stabilizer. Another Rage followed. Fujita played a Temple for his fifth land, which allowed him a Chartooth Cougar. It fell to yet another Rage.

Kawasima was still stuck on a single blue. Fujita brought back his Dragon and waited. Still nothing from Kawasima. His seventh mana came into play tapped, and that was Kawasima's cue to draw an island for Annex on the Temple. Fujita made no play, and neither did Kawasima. Then, Fujita drew another land, and was able to clear the board with Vengeance, getting back his Temple. Kawasima stripped it with Lay Waste and replaced his Stabilizer.

Fujita's Eternal Dragon hit the sky fighting. He picked up the other and got ready to deploy it. Still, Kawasima could do nothing. Akroma came down and he had no counter, just a Starstorm to clear out the Dragon. A turn later he was dead.