Round 8: Patrick Mello vs. Emmanuel Vernay

Both Emmanuel Vernay and Patrick Mello can afford to breathe fairly easily. At 7-0 they are both almost certs to make day two. Now it's a question of just how well they can set themselves up for Sunday.

Like a lot of the French Vernay had chosen to run Suicide Black. Unfortunately for him Mello was running Piledriver Sligh, a matchup firmly in favor of the German. 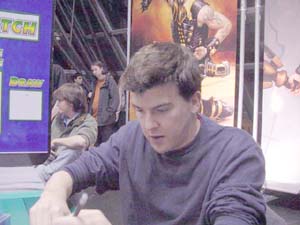 Compounded on top of this Vernay chose to play a one swamp hand and his deck stubbornly refused to cough up another. He was still able summon two Carnophage and attempt a Cabal Therapy, which missed.

Unfortunately Mello had two Goblin Piledrivers and a Reckless Charge. Two swings for nine and the Frenchman was shuffling up for game 2.

Vernay didn't have a turn 1 play in game 2 but was able to Edict away Mello's Lackey. Mello followed with Seal of Fire and Mogg Fanatic. Then the Frenchman found one of his sideboard cards as Engineered Plague on Goblins made things difficult. The German didn't play a spell on turns three and four and a Mesmeric Fiend revealed a hand of two Lava Dart, Reckless Abandon and a useless Raging Goblin. Unsurprisingly the Fiend didn't trouble the board for too long leaving both players with a bunch of land and, crucially, the Engineered Plague.

Vernay dropped a Skittering Skirge. Mello disposed of it with Abandon on a Piledriver. A Barbarian Ring took care of a Sarcomancy token and perhaps gave the German a win mechanism as the residual enchantment started leeching Vernay's life. A second Sarcomancy doubled the pain as Mello drew a scroll and bashed the Zombie off the board.

A Negator rolled up and turned the game round again, putting Mello in an awkward situation. Any damage to the Negator would give him an outlet to sacrifice the damaging Sarcomancy enchantments. But could he just take 5 damage a turn? 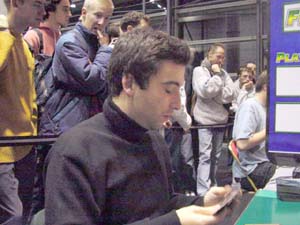 Vernay made another Sarcomancy and Mello pondered the situation in his end step. He decided to play it safe and went after the Negator. The Frenchman sacrificed two residual Sarcomancy's. Mello scrolled it again in his main phase leaving Vernay a lot to consider.

The Negator took itself and the remaining Sarcomancy off the table, leaving Mello in control with a Cursed Scroll.

Another Negator appeared and got whacked about a bit by the Cursed Scroll. Vernay wanted to keep it and chose to lose two land. He was hoping to end the game in a few quick hits before Mello de-permanented him completely.

Unfortunately the Frenchman had forgotten about the two Lava Darts in Mello's graveyard. Mello realizing this had delayed flashing them back until Vernay had dropped himself to just one swamp. From there it was too far back for the Frenchman.