Round 8: Put Up Your Dukes

vernight, there were three players, all tied at 5-1, leading the pack. The first of them was Brian Kibler, one of the most experienced competitors at this tournament, with a Pro Tour debut in 1996. The other two were Reid Duke and Shahar Shenhar, who are currently facing off in this M14 draft match. As Kibler lost his Round 7 match, while Shenhar and Duke both won theirs, this meant that we got to see a match between the two point leaders.

Interestingly, Duke and Shenhar are basically the complete opposite of Brian Kibler: they are young, not as experienced, and haven't posted a Pro Tour Top 8 finish yet. Nevertheless, in the short amount of time that they have been competing at the Pro level, they have already shown that they are very, very good at Magic.

Shenhar stormed on to the Pro Tour scene at Pro Tour Paris 2011, and has racked up six Grand Prix Top 8s and 112 pro points in the meantime. Duke, who debuted three years ago at Pro Tour Amsterdam 2010, has a resume that is almost identical to Shenhar's: he has seven Grand Prix Top 8s and 112 pro points. Both of them are passionate, eager to win, and well on their way towards becoming the faces of Magic in the years to come.

"It felt pretty good that both Shahar and I finished on top of the standings yesterday," Duke said, "because we have had pretty much the same career path the past few years. It's nice to see that the person I've been competing with all the time is doing so well."

Duke also pointed out the differences with last year. "Last year at the Players Championship, if you look at the results, it felt like it was the old man's game: The top six players were either Hall of Famers or players with a Hall of Fame-worthy resume," he said. "But this year is different." 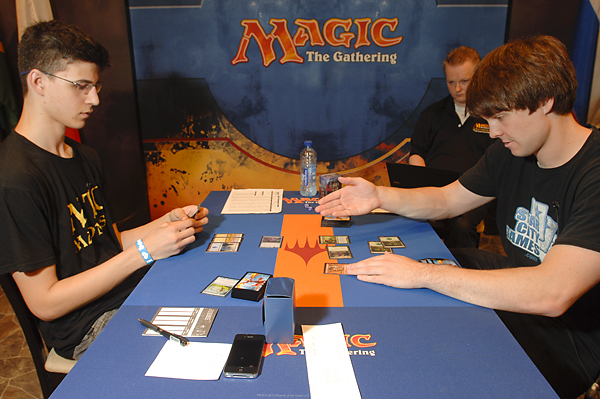 Both Reid Duke and Shahar Shenhar have been proving this weekend that the Magic World Championship is being led by the youngest generation competing, as we witness two future legends battle it out.

Indeed. It was not two Hall of Famers with Pro Tour Top 8s dating back to the 1990s, but rather Shenhar and Duke who are---excuse the pun---duking it out to see who would remain the sole player on top.

"New boys are back in town," Shenhar quipped.

The drafts and decks

Shenhar had drafted a blue-white deck with lots of flying creatures and the potential for a turn four Serra Angel with Warden of Evos Isle. "That Warden is so good in my deck," Shenhar mentioned. 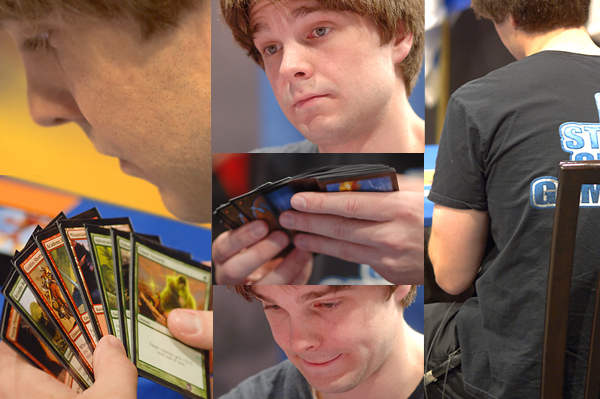 Duke is on a mission to go from worst to first, following last year's rocky Players Championship outing with an astounding showing in this year's Magic World Championship.

Reis had drafted Green-Red featuring Marauding Maulhorn, Advocate of the Beast, and Ogre Battledriver. "I passed a Vastwood Hydra during the draft. I took Young Pyromancer over it. Is that crazy?" Duke asked his rival. Shenhar agreed with the pick. "You don't want too many five-drops," Shenhar said. Duke agreed: "After the first pack, I had some good cards, but everything was super expensive. I was solid on the high end, but I needed some cheap creatures to compete. Young Pyromancer, being a cheap creature that can give a small bonus as the game goes on, is good value."

The match convincingly handed the victory to Duke in two quick games. "I thought the games would go fast, and whoever would get off to a faster start would win," Duke said afterward. As it turned out, it was Duke who got off to the fastest start, and the two games were almost exact replicas of each other.

Both times, he had a Kalonian Tusker on turn two, which got promptly Dispersed back to his hand by Shenhar. "If I don't bounce it there, I'm going to take too much damage," Shenhar explained after the match. "I felt like I couldn't turn Disperse into a combat trick, so I used it as a tempo play to prevent damage. Kalonian Tusker is so good against me. If Reid didn't have it, I might have won those games." 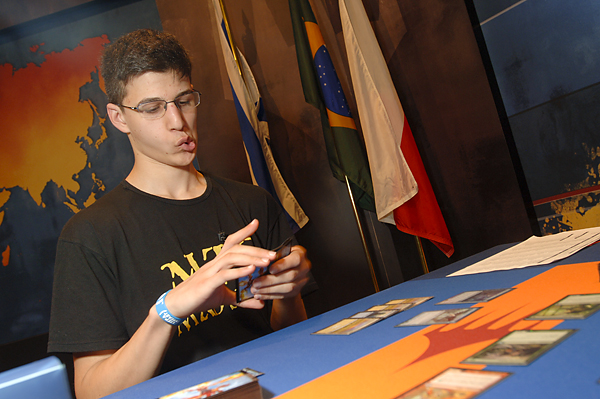 Shenhar tried to pressure Duke with Warden of Evos Isle, Nephalia Seakite, and some other flyers in both games, but it was to no avail. Kalonian Tusker quickly returned to the battlefield, followed by cost-efficient creature after creature. Marauding Maulhorn, Young Pyromancer, Duke never stopped adding more power to the board. When Shenhar tried to claw back, Duke had Chandra's Outrage at the ready to remove a flier and Volcanic Geyser to the face for the last points of damage.

Duke also showed us that even if a card is an Instant, you do not have to play it at instant speed: In game 1, he cast Chandra's Outrage on a freshly cast Air Servant during his main phase, not during Shenhar's turn. "If I could let him untap, he could have Cancel or Show of Valor," Duke explained. It's a basic play, but nevertheless one showing that Duke has mastered the art of playing spells at the right time.

Erasing all memories of his last-place finish at this event last year, Duke didn't just redeem himself. He is now the sole point leader at the World Championship, close to locking up a Top 4 berth.