Round 8: Raphael Levy vs. Dirk Baberowski 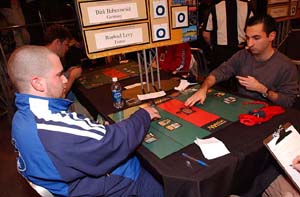 Neither player was particularly happy about the way their decks had turned out in the draft.

Dirk: "My deck is interesting and not too great – his is just bad." Saying this the German showed me his deck – a pile of Elves and a couple of black cards.

Despite making day two, Dirk made it known that he loathed the format and was already waiting for the set to rotate out. Raph was slightly more light hearted about the whole affair, having just amalgamated the classic three color green deck the French are so renown for.

Levy won the toss and elected to play first, but Dirk seemed to gain the early-game advantage quickly with a second turn Wellwisher (very good in the match-up) followed by a third turn Wirewood Savage (even better). This apparent advantage was immediately brought to a halt when the Frenchman managed to peel not only all three-color lands, but also a Mistform Dreamer and a Lavamancer's Skill. The Skill immediately started going to town on the German's creatures.

Dirk: "Raph can play the worst decks and still beat me."

The game progressed with both players laying fairly large beasts: Gormas, Treespring Lorians, Ascending Avens, Elvish Warriors and eventually a Slipstream Eel – but attacking was just too difficult for Dirk as the Lavamancer's Skill would make thing ugly. When Baberowski finally had to start blocking a full out attack from the Frenchman the advantage the Skill gave, combined with a Shock in hand for Levy, proved too much of a wrecking ball and the German conceded.

"Ah – the one Skill", sighed Dirk ruefully. Feeling like he should really win the match-up if the Skill was dealt with, Dirk sideboarded in a Naturalize and a Dredgings for a couple of weak Elves. 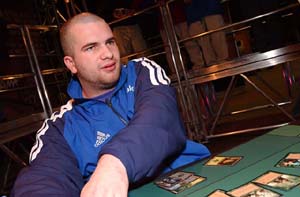 Once again Dirk began with some great cards in the match-up: 2 Wellwishers, a turn 4 Undorak and a Gluttonous Zombie. Raphael did his best to deal with this with a Wirewood Savage, Barkhide Mauler and an Essence Fracture, to stop the beats, but the Wellwishers were just too hard to race as the Gluttonous Zombie kept swinging over for three unopposed. The ground was being held easily by 2 Snarling Undoraks on the German's side, so by as soon as turn 8 Levy swept – knowing that winning a third game in time might have been an issue against a deck with 4 Wellwishers.

Dirk: "I am kinda happy I got that Zombie. It gave me a chance to win. You gonna board in black creatures to block it?"

For the third time running Baberowski had a pretty insane start: Turn 2 Wellwisher; Turn 3 Wirewood Savage; Turn 4 Snarling Undorak; Turn 5 Snarling Undorak. Meanwhile Raph managed a Mistform Dreamer, 2 Morph Creatures and an Information Dealer, but not the Lavamancer's Skill he was hoping for, despite having the mountain. 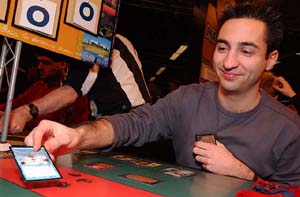 Once of the Morph creatures turned out to be a Spitting Gourna and managed to trade with a Snarling Undorak through double blocking. This still left the second Undorak on the table, so Levy knew he was on a tough clock and needed to find that Skill quickly. The Information Dealer starting searching away – and actually started to prove quite useful when Raph made a Bloodline Shaman (which is a combo). Flipping unwanted lands over by naming 'ape' the Frenchman finally managed to find the Skill and started to rip a whirlwind through the Elves on the board, but two Dredgings from the German was just too much for one creature-enchantment to handle.

Finally being forced to block with his 'illusioned' Mistform Dreamer as 2 Undoraks and 2 Wellwishers launched into the red-zone Levy knew he could not win.

Dirk: "Am I going to stop my losing streak against you finally?"
Raph: "You just beat me in Reims?!"
Dirk: "Ah yeah, but you were playing that %^&* deck and I was playing a red deck – so that doesn't count."