t was a very close match between two expert control players, but Eric Froehlich was able to edge out Hall-of-Famer Zvi Mowshowitz 2-1 to end Day 1 of Pro Tour Dragon's Maze 6-2.

A certain Hall of Fame candidate for this coming class, Eric Froehlich has been really making his presence felt in this last year, making four Grand Prix Top 8s and the Top 8 of Pro Tour Gatecrash this past February. A top-tier player, Froehlich was pleased to run his Esper Control deck into a field filled with control decks, eager for the opportunity to simply play better than opponents in a sea of intricate matchups. His opponent was no easy meat, however. Zvi Mowshowitz is a Hall-of-Famer known for his incredible deckbuilding prowess and his highly analytical play. The Bant Control deck he and a good number of the other members of Team StarCityGames are playing is the perfect foil for the Esper piloted by Froelich and many members of the rival ChannelFireball. 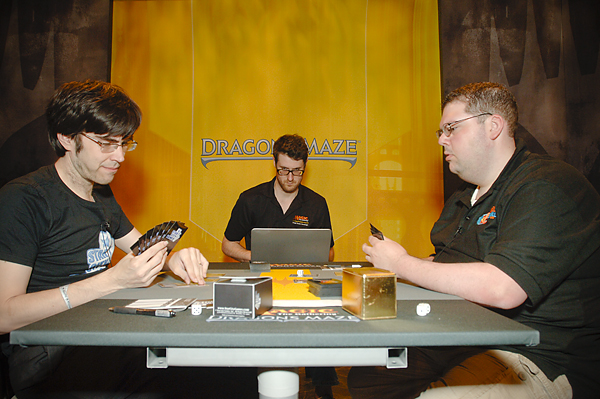 Eric Froehlich and Zvi Mowshowitz were used to settling in for long games and epic card drawing countermagic battles at this point.

As seems to be the tale of the tape for control mirrors, mana was the most important factor in deciding the winner of this match. In the first game, Froelich jumped out to an early lead with a Jace, Architect of Thought, and a Blood Baron of Vizkopa. Mowshowitz tried to stave things off with removal, but Froehlich always had an answer to keep it alive. When Mowshowitz landed an Ætherling soon thereafter, it became a nailbiting race that is sure to become fairly commonplace in the future of Standard. Due to the constant stream of removal Froehlich used to temporarily push the Ætherling out of the way, Mowshowitz's offense required an incredible investment of mana to keep ahead of the Baron's lifelink. This prevented him from advancing his board any or even casting the other spells in his hand.

"It took most of my mana to keep racing," Mowshowitz explained. "My hand had a pair of Sphnix's Revelations and two Syncopates, which are the worst cards for me to have when I'm locked down like that." 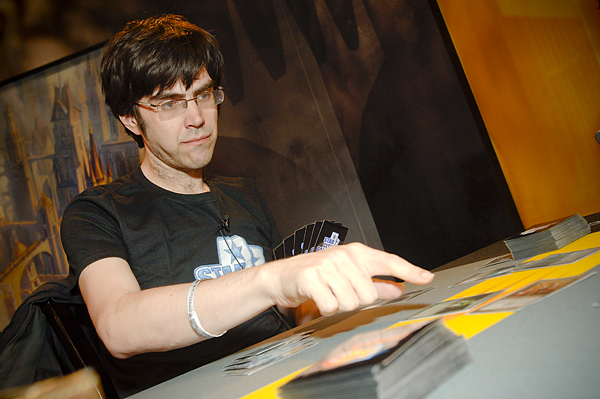 Zvi pushes through in a tense control match, holding on until the last possible moment to swing.

With Mowshowitz down to 2 life and facing a Baron and Sin Collector, Froehlich's stream of removal stopped. This gave Mowshowitz the window he needed to get a second blocker into play, keeping himself alive. Froehlich bricked on removal one last turn, and Mowshowitz was able to attack through for lethal.

The second game came down to another razor-thin margin.

"Game 2 was all about him hitting land four first," Mowshowitz explained.

Down a game, thus deciding to play first, Froehlich began building his mana. He actually stumbled on turn four, not being able to play the Jace he was holding, but a complementary stumble from Mowshowitz allowed Froehlich the turn he needed to draw the land he needed. Noticing Froehlich's mana troubles, Mowshowitz split the land away from two spells. Froehlich went for the two spells, possibly regretting the decision when Mowshowitz used a Jace of his own to reset the board. This seemingly minor advantage meant all the difference in the game as Froehlich went on to land another Jace soon after, making him the only player to actually get use out of his Jaces all game. A few turns later, Ætherling came to finish things off. 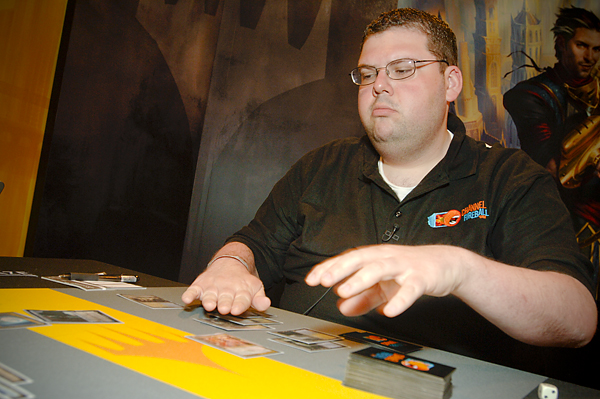 Jace and Ætherling. Two of the key cards in these control matches, and the player who's able to resolve both of them is likely to win.

While the other games were finished with haymakers over a small number of turns, the third game was much more grindy. Despite Mowshowitz's mulligan to five, he managed to hold off most of Froehlich's team with an Advent of the Wurm. Still, Froehlich had two key cards to take the match: Nightveil Specter and Sin Collector. The Specter did double duty, acting as both a damage source and Howling Mine for Forehlich, allowing him to slowly pull away. The Sin Collector came down at the perfect time, stealing the Supreme Verdict in Mowshowitz's hand before he could cast it to clear away the Specter along with the rest of Froelich's board.

Three fairly close games, three different ways that mana impacted the outcome of this tight control-on-control match. Be it tight mana over the course of a race, being the first one to land a Jace, or having the wrong mana at the wrong time to cast a key spell, taking advantage of the little windows these mana troubles can create is imperative to succeeding at the highest level of Magic, and Mowshowitz and Froelich put on a clinic.