Richard Hoaen was complaining before this round that despite his perfect record he had yet to receive a feature match. He inquired as to the reason suggesting that it had something to do with his personal appearance, "It's because I'm ugly isn't it?" 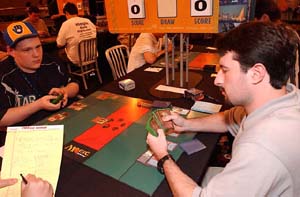 As the only remaining undefeated players in the tournament Richard would need to frighten small children to not get a feature this round against relatively unknown Emanuele Canavesi from Italy.

Hoaen was a member of the Canadian National team and was a Top 8 competitor at Pro Tour Yokohama last season. He worked with Jordan Berkowitz, Mark Zajdner and US National Champ Josh Wagener to prepare for this event. When asked if he was sporting the same mono-brown build as the rest of the group, Hoaen shuddered, "Good lord no, I'm playing goblins."

There was no dickering around with Mercadian Masques enchantments or second colors in this deck. It was straightforward Gob-Vantage with the Charbelcher thrown in for combolicious goodness. His opponent was playing another straightforward deck—Psychatog with Cunning Wish.

Emanuele was not worried about revealing his deck type to his opponent, "We played next to each other the round before—there are no surprises."

Hoaen was skeptical, "Watch him Wish for something ridiculous."

Emanuele nodded, "Ahhh, yes. There will be surprises!"

Rich led off the action with a turn two Goblin Piledriver. When he tried to put on the pressure with a Warchief on the following turn it was met with Counterspell. When the Canadian attempted a Ringleader the Italian used Brainstorm to dig for a Force Spike and spiked it.

Rich played a Prospector on the next turn and when that resolved he tried a Goblin Recruiter. Brainstorm yielded a Mana Leak but Hoean was able to pay for it by sacrificing a pair of Goblins. When the Recruiter resolved, Rich took about thirty cards and showed them to his opponent. 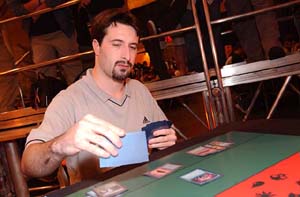 Rich went for another Ringleader on the next turn and the Italian had to Intuition for Force Spike to counter it. The next Ringleader—certain death for the Italian if it resolved—prompted a Fact or Fiction. Emanuele took the pile with Counter, AK and FoF over a Tog and an Island. One sacrificed Delta later and the Ringleader was countered.

The Italian played a Psychatog and passed the turn. Now Rich was down to his Warchief—Piledriver were sure to follow—but could not muster an attack past the Tog and said, "go".

Emanuele AK'd for two cards and Smothered the Warchief. He attacked and bluffed the kill but Rich had no blocks and he only took one. Emanuele had a Counterspell for the Piledriver and was able to Intuition for Smother when the next one resolved. He wasn't bluffing when he did the math this time and Rich fell to the smiling Atog.

Richard sided in two Damping Matrix and a pair of Defense Grid. To nobody's surprise, Emanuele brought in Engineered Plague. Richard mulliganed his opening hand but kept the next six and kicked things off with the Skirk Prospector. He attempted Goblin Warchiefs on the next two turns but they were each met with Mana Leak. Rich did manage to get a Mogg Fanatic in and was able to get in for two a turn.

Rich played a Defense Grid but it was countered as well. He played a Piledriver and Emanuele let it resolve so he could Intuition for three Accumulated Knowledge and draw three cards. When Rich attempted another Defense Grid on the next turn it resolved but not before the Piledriver was Smothered. Emanuele fell to nine on his opponent's attack. 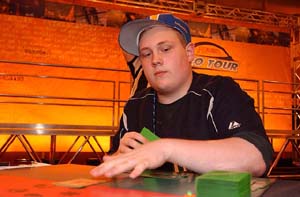 Emanuele was able to keep the goblin hordes at bay with a Psychatog and Rich built up for an alpha strike with Skirk Prospectors. Emanuele had other plans and Intuitioned for three Engineered Plagues and cast it naming goblins. The Mogg Fanatic took a last shot on the way out and the Italian dropped to eight.

Rich mustered a Piledriver off the top but the Italian had the Smother and an AK for four. "Okay, you win," was Hoaen's response to the AK for four.

Emanuel Canavesi was the only player left at the end of day one with an undefeated record. This was clearly his best performance on the Pro Tour to date. He did make day two in Venice last year with a 4-2-1 record but at 8-0 he was looking forward to a better finish this weekend. He sympathized with Rich for his so-so draws, "You drew pretty badly. Today was my day. As for tomorrow..."

When asked why he chose to play the fairly stock Psychatog deck he explained, "Goblins was not my style and Tinker seemed too complicated. I played a lot of Psychatog last year in Extended and Standard..." The deck must have served him well since he qualified for this event on rating.