Round 8: The Right Tools for the Job

East met west as Fujita and Vidugiris met in the final round of play on Day One of Pro Tour Nagoya. Their drafts had taken different, yet similar paths. Both players were playing decks with a heavy number of fliers. Fujita took the more traditional route, playing white-blue. Vidugiris was red-green, and most of his fliers were either colorless artifact creatures or castable for Phyrexian mana.

Fujita needed to mulligan his first hand away, though he did so with a smile on his face. It was going to take more than starting down a card to get him feeling blue. After accepting his second hand, he started with a Plains. Vidugiris got on the board on his first turn with a Vault Skirge off of a Mountain. Fujita met him in the skies with a Gust Skimmer. Vidugiris made an Immolating Souleater on his turn. 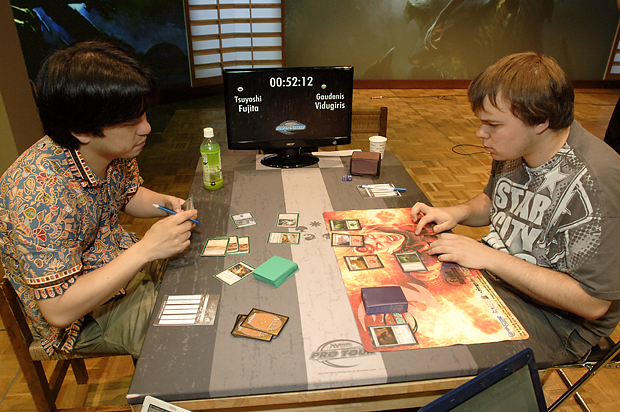 Tsuyoshi Fujita and Gaudenis Vidugiris face off in the final round of Day One here at Pro Tour Nagoya.

Fujita hit first, taking to Vidugiris with his Skimmer. Vidugiris chose not to trade, opting to try and swing back with his Skirge. Fujita passed without playing anything, content to let Vidugiris attack. When he did, Fujita made a Master's Call, trading one of the tokens for the 1/1 Souleater. Vidugiris had nothing else and passed the turn with three mana up. Fujita's next turn added a Strider Harness to his side, attempting to set up a steady stream of hasty attackers. Vidugiris quickly dealt with it, sending it and the Skimmer Into the Core. Fujita replaced his Equipment with a Strata Scythe set on Plains, of which there were currently three on the board. Vidugiris, not willing to let Fujita gain too much of an upper hand, used a Phyrexian Metamorph to copy the Scythe, setting his copy on Mountains.

With both Strata Scythes on three, Vidugiris could equip his Skirge and start sending for large chunks of lifelinking damage. Fujita needed to formulate a plan. He started by using Gitaxian Probe to see Vidugiris's Galvanic Blast. Afterwards, he made a Glint Hawk, returning his Strata Scythe. After refusing to replay it, he passed the turn. On his turn, Vidugiris added another Mountain to his side before equipping his Strata Scythe and swinging. Fujita used a Disperse to send the Metamorph back to Vidugiris's hand, but didn't declare a blocker for fear of a pump spell. Vidugiris just passed the turn after his attack. On his turn, Fujita added a Loxodon Partisan to his side. When he went to attack with his Hawk, Vidugiris shot it out of the sky with his Galvanic Blast.

With a massive void in the sky, Vidugiris chose to toss a massive animal in to fill it. His Lumengrid Gargoyle was a veritable dragon, filling the skies with its massive 4/4 frame. Fujita didn't have an answer. The next couple of turns ticked by as Vidugiris swung inexorably. With no answers, Fujita soon succumbed.

Fujita chose to play first for the second game as well, and was much happier with his starting seven. Once again, Vidugiris got on the board first with a Vault Skirge, but Fujita was determined to keep the life totals under control with a Suture Priest. A Spined Thopter took a 3-point chunk out of his life total on the second turn, but Vidugiris had a clear advantage in the sky. He made and equipped a Sylvok Lifestaff on his third turn, swinging in for 4 damage and 2 life. He immediately took advantage of that life gain to make a second Vault Skirge. At the end of his turn, Fujita played a Master's Call, gaining yet 2 more life, bringing the life totals to 17 for Fujita and 14 for Vidugiris. A Lumengrid Drake came down for another 1 point of life, but Fujita wasn't at metalcraft so the Drake came down as an inert 2/2 flier. 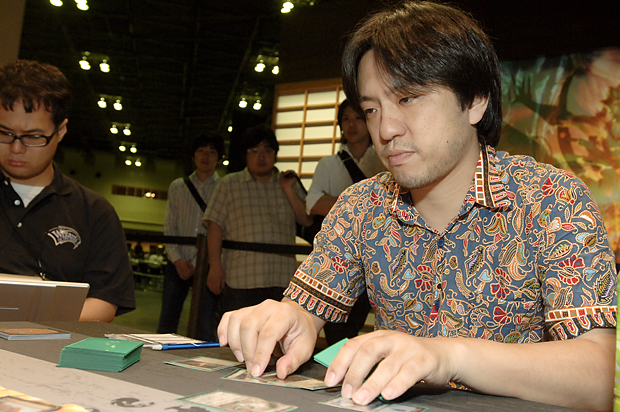 The next couple of turns passed with both players swinging with a pair of creatures: an equipped Skirge and a Thopter for Vidugiris and a pair of Myr tokens for Fujita. Eventually, Fujita took the advantage with a Viridian Claw on his Lumengrid Drake, stopping any potential attacks from Vidugiris. Vidugiris tried to kill it with a Galvanic Blast, but Fujita had the Apostle's Blessing. On his turn, Fujita moved the Claw to a Myr and attacked, dropping Vidugiris to 5. A second Suture Priest put Vidugiris's back against the wall. The Claw went back to the Drake and Fujita passed the turn.

Against the ropes and staring down a pair of Suture Priests, Vidugiris could only add a Snapsail Glider before passing the turn, dropping himself to 3. Fujita attacked with his Clawed Drake, and Vidugiris as forced to block with his equipped Skirge. Fujita made a Sky-Eel School and passed the turn. Vidugiris attached the Lifestaff to his Thopter, attacked, and then moved it over to his Glider before passing the turn in defense mode. A couple more turns passed, with Fujita bolstering his air force while Vidugiris could do nothing to help his own. Eventually, Vidugiris had to make the difficult decision and conceded the game.

For the third time in a row, Vidugiris began with a first-turn Vault Skirge. This time around, it was joined by a Myr Sire on turn two, and both creatures smashed in on the following turn. Fujita decided not to block with is freshly-cast Suture Priest, understanding how much loss of life the little man had done over the previous game. Vidugiris added a Culling Dais to his side after attacking, which was going to combo nicely with his Myr Sire.

Fujita made a Viridian Claw, equipping it and attacking for 2 with his Priest. Vidugiris turned his card advantage machine on, using his Dais to kill his Sire, getting himself a token. On his turn, he sacrificed the token, too, followed by the Dais, to draw a pair of cards. After that, he attacked for 1 and passed the turn. Fujita swung back for 2 before adding a Lumengrid Drake to his turn simply to stop the Skirge. When Vidugiris one-upped the Skirge with a Skinwing, Fujita chose to go on the offensive with it, equipping it with a Viridian Claw and sending for 3. Continuing with his flying monsters theme, Fujita added an Argent Sphinx to his team, though he didn't have metalcraft.

Vidugiris had to seriously think. Eventually, he decided to use his Phyrexian Metamorph to copy the Lumengrid Drake. Unlike Fujita, Vidugiris did have metalcraft, and he used his faux-Drake to bounce Fujita's Sphinx. This cleared the skies for him to attack for 3. All Fujita could do was replay it and pass the turn. Having regained a slight bit of momentum, Vidugiris now had to find an advantage. The Ogre Resister he made was something, but the combination of Viridian Claw, Argent Sphinx, and Suture Priest was pretty hard to overcome. Things got even worse when Fujita used Revoke Existence to remove the Skinwing. Argent Sphinx knocked Vidugiris to 5, putting him a couple turns and chump-blockers away from death. 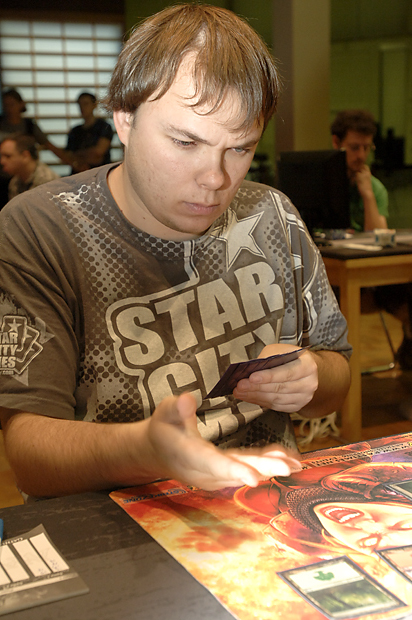 Vidugiris passes it back, looking for a way out.

Vidugiris was stuck. He was forced to Turn to Slag Fujita's equipped Drake, despite Fujita having mana up. Fujita Dispersed his own creature, countering the Turn to Slag and saving both the Drake and the Equipment. Vidugiris then sent his Resister and Skirge in. The life totals sat 9 for Fujita and 6 for Vidugiris. Fujita started to do some phantom abacus math before equipping his Sphinx and attacking. Vidugiris dropped to 2. Fujita replayed his Drake, dropping Vidugiris to one, and passed the turn.

Vidugiris hadn't given up, deciding to attack with his Resister and see what happened. Fujita simply took it and dropped to 6. He then sent his equipped Sphinx in at Vidugiris, who was forced to chump block. Now locked at 1 life with a Suture Priest on Fujita's side, Vidugiris drew his card and conceded.