Round 8: Rob Dougherty vs. Chris Benafel 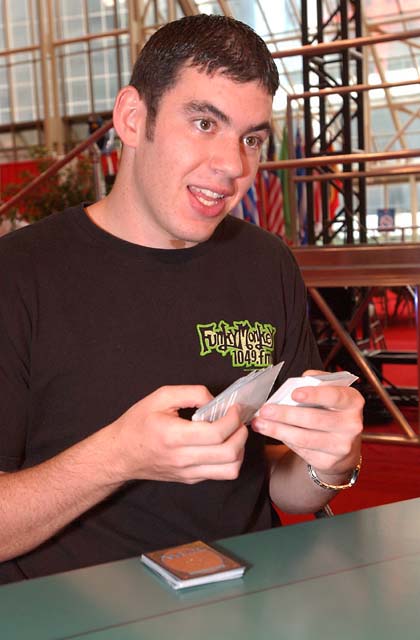 The match started with a big discussion over the die roll. Chris Benafel had beaten Rob to the Feature Match area, and seated himself with the advantage of being able to see the clock, so Rob wanted to use the standard die roll to determine who would decide on the seating arrangements.

After explaining to Chris how the roll worked (whoever won the roll got to either pick who sat where, or opt to give this decision to their opponent so that the winner of the roll could decide who played first), Rob asked if he understood.

"No," Chris said with a small, sheepish grin. A judge was called over to explain again, and after Chris figured things out, they rolled the die.

After all this ruckus, Rob won the die roll and decided playing first was more important than playing with his back to the clock.

During Chris's fourth turn, Rob said, "Try and play just a little bit faster." Chris took about four minutes to decide to play Mirrorwood Treefolk (with only plains and forests in play, no mountains to use the damage re-directing ability on the Treefolk). This methodical nature was exactly why Chris had four draws in his record, and Rob didn't want to be the fifth. 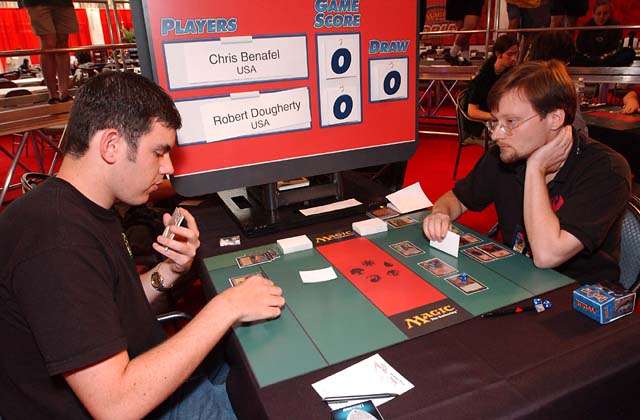 Rob drafted a nice red-green-black deck with tons of removal, and Chris drafted green-white-red, but none of his mountains wanted to surface. At a later moment in this game, Rob had out the Thornscape Apprentice, Horned Kavu, and a three-counter-kicked Emblazoned Golem, while Benafel was still stuck with four land (no mountains), an Amphibious Kavu, Mirrorwood Treefolk, and his Penumbra Bobcats.

Rob attacked with the Golem and Horned Kavu, and immediately Chris decided to triple block with all his creatures, aware that Rob's Apprentice could give one of his creatures +1/+1. Rob took a couple minutes to think things over, and Chris piped up, "You might want to play a little faster yourself."

Rob nodded, tapped some mana, and Agonizing Demised Benafel's Treefolk, which let Rob kill both of Chris's other creatures, and use his Apprentice's ability to save his own Horned Kavu. Chris was now left with a 2/1 black Bobcat counter on his board.

The next turn, Chris tapped out of his four mana, still no fifth land, to cast Charging Troll. Rob Magma Bursted both creatures, sent his Kavu and Golem into the Red Zone, and brought the life totals to 20-6.

Judge Sheldon Menery gave both players three minutes to sideboard and shuffle, letting them know that they were being timed. At each one minute interval, he mentioned the time, and when the time came to approximately three minutes and twenty seconds, he notified both players that they received warnings for slow shuffling. He then asked if either player had received previous warnings for this same offense. 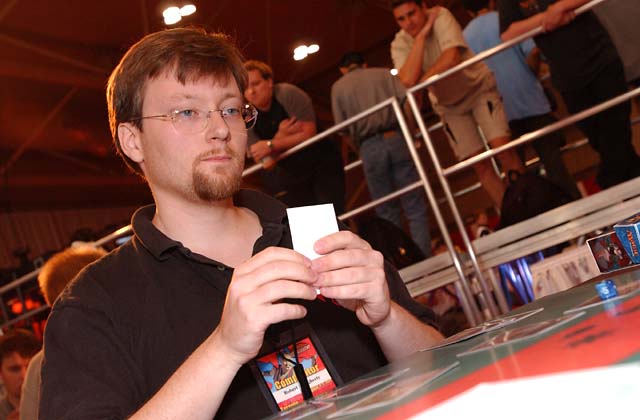 Chris said "Yes, I got one yesterday." Sheldon then wandered off to get some consultation on what the penalty would be.

After a little deliberation, Mike Donais kept Sheldon's ruling and the match ended with Dougherty-2, Benafel-0.

The players shared a quiet hand shake before leaving the Feature Match area.