Round 8: Rob Dougherty vs. Itaru Ishida 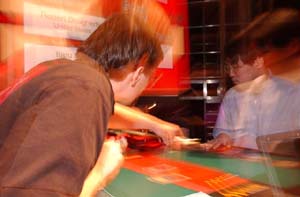 Itaru Ishida is among a handful of players who vie for the title of the best player in Japan. He had an amazing year – among his accomplishments is winning the largest Grand Prix ever to be held, being a part of the most successful Japanese team Panzer Hunters (that came in 2nd in Masters last year and will play in the finals of the Masters this Sunday) and winning the prestigious Finals tournament held in Japan at the end of each year.

Rob Dougherty is the owner of famous Your Move Games store and an essential part of the team that bears the same name. An accomplished pro both as a member of his team and in individual play, Dougherty emerged from under the shadow of his teammates Kastle and Humpherys first as an equal and recently as a possibly even more successful of the three.

The two players are currently at 6-1, both playing mono-black control decks. Ishida uses four Laquatus' Champion and can go through his deck more quickly with Tainted Pacts, while Dougherty's big bruiser is Stalking Bloodsucker.

Ishida missed several land drops, which meant Dougherty was the first to reach the crucial five mana. At the time, Ishida was at three mana only, causing Dougherty not to cast his Mind Sludge that turn. Dougherty waited till turn 6, in order to get six cards out of his opponent's hand – leaving him with one card only. Ishida chose to keep Skeletal Scrying, which allowed him to turn that one card into three at the end of Dougherty's turn. 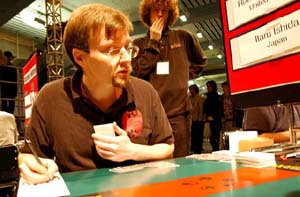 With one of Dougherty's Nantuko Shade's Edicted earlier in the game, neither player cast any business spells for several turns. They took turns destroying some of each other's lands via Rancid Earth, but that was largely inconsequential as both players drew plenty of mana.

Doughery's second Shade succumbed to a Mutilate and so did Ishida's Laquatus' Champion. Dougherty chose not to cast his third Shade as Itaru had Chainer's Edict in his graveyard. The game would very likely be decided by which player could find his Haunting Echoes first.

After a six turn land-laying marathon, Ishida used a Tainted Pact to find Mind Sludge, getting rid of Dougherty's fourth Shade, Mutilate and Chainer's Edict. Dougherty may not have been happy about it, but he made up for the loss of card economy by top-decking his Haunting Echoes! He got rid of Edicts, Rancid Earths, Sludges, Mutilates, Champions, Tutors and Skeletal Scying. This left Ishida with Nantuko Shades and Shambling Swarms to try and win the game. Dougherty also must have been extremely relieved to learn that there was no Haunting Echoes in his opponent's main deck!

Dougherty had a Stalking Bloodsucker in hand, but he was able to determine that his opponent had an Edict in hand by looking through Ishida's removed from game cards. He waited until he drew a Mind Sludge, getting rid of three removal spells. Unfortunately for Dougherty, Ishida could still cast an Edict out of his graveyard, so he chose to wait longer before casting his best creature for this matchup.

Ishida summoned a Shambling Swarm only to have it killed by Dougherty's Edict out of the graveyard. Dougherty was out of removal spells. If Ishida could draw and summon a Shade, he would be able to win the game in one attack. Ishida did draw a Shade 2 turns later – only to have Dougherty top-deck Innocent Blood on the very next turn!

Dougherty made his big move. He used Cabal Coffers to generate enough mana to fist cast Innocent Blood and then summon two Stalking Bloodsuckers. However, Ishida had Innocent Blood in hand. He used that, and the last Edict, to clear the board. Dougherty was down to just a pair of Shambling Swarms to win the game with. However, if he drew enough removal to kill Ishida's Shades as they were cast, he would be able to deck the Japanese player thanks to the Haunting Echoes he cast earlier. 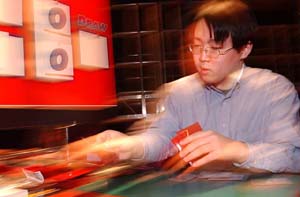 The players began with about twenty six minutes left in the round. If Ishida could win the second game, the match could likely end in a draw.

Itaru had a perfect opening hand of Mesmeric Fiend followed by Rancid Earth – if he drew a second Swamp. He chose to keep a hand with one Swamp and Cabal Coffers – a decision that did not work out as he skipped several land drops in a row and had Dougherty use Rancid Earth on his only Swamp. Dougherty got out a Nantuko Shade. Strangely, he chose not to cast Braids on turn four to seal the game, but to use all his mana to pump Nantuko Shade instead.

Braids came out on the following turn. Dougherty saved it because he wanted to cast a Mesmeric Fiend first to steal away Innocent Blood if his opponent had one. With Braids in play, Ishida drew his second card and conceded the match.