Round 8: Ryan Fuller vs. Alex Shvartsman

One year ago, one season ago, I covered the feature match involving these two players in this very format- Sealed Deck. That was in Grand Prix-Hong Kong, and involved Odyssey-only Sealed deck. Both players met in the round of four, where Fuller had little trouble disposing of Shvartsman with his deck featuring Overrun. Then again, Shvartsman didn’t really stand much of a chance, with his sealed deck shining with bombs such as Zoologist and Bloodcurdler. One can only imagine how poor his card pool was back then. 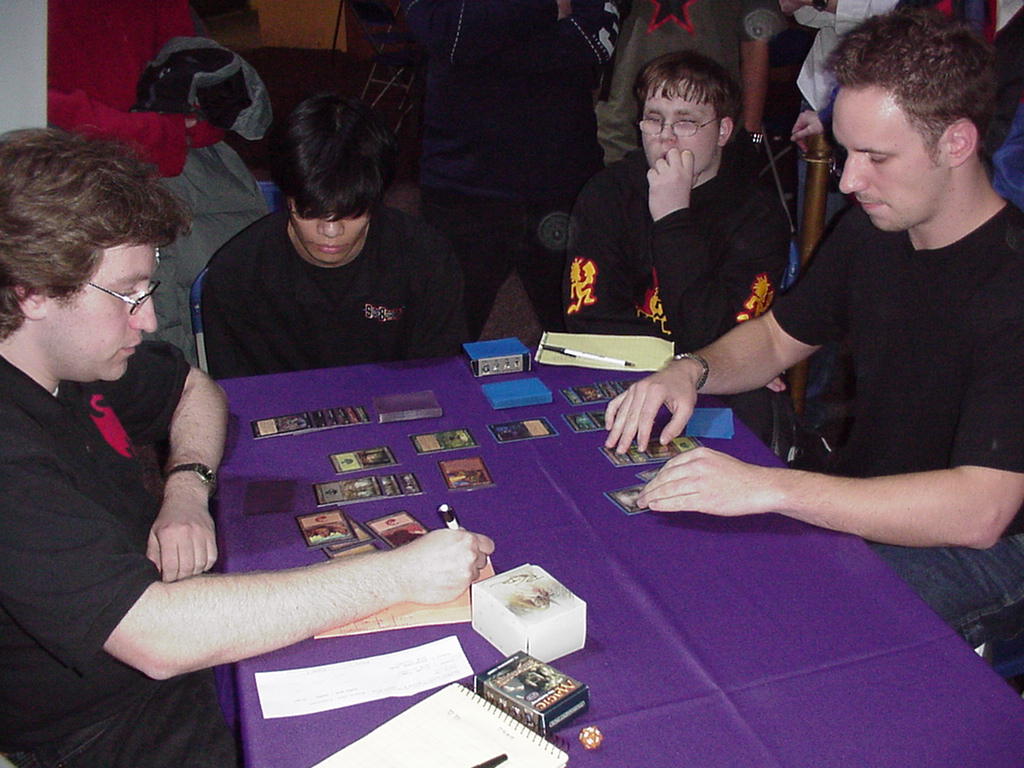 Now, both players move onto the Sealed Deck involving Onslaught and Legions. Both players confessed to not having a heck of a lot of experience with Legions- In fact, Fuller’s experience with the new set involves reading and re-reading the spoiler over and over again on the flight over to the United States. Shvartsman is out to try and avenge his loss from Hong Kong.

Fuller kept a decent hand containing a good mix of spells and lands. Shvartsman, on the other hand, drew a less ideal hand- six lands and a lone spell. He sent that back in, as the powers that be laughed out loud as his next hand held six lands. He kept. Fortunately, drawing that many lands in the beginning means that it is, in fact, fairly difficult not to draw spells. Fuller opened with a second turn Stonewood Invoker, bringing out complaints of “What kind of person brings out stuff on turn two in this format?” from Shvartsman, to which Fuller, never at a loss for an answer replied, “Why me, of course.”

Both players led with morphs on their third turn, just like 90% of the other games out there, and then Fuller dropped the bomb- Death Match.

In a nutshell, the rest of the game really was a painful demonstration of just how insanely good Death Match is in B-G decks. For those who do not understand it, simply speaking, the majority of your creatures have a toughness of four or more, which breaks the symmetry of the Death Match, since your opponent cannot dispose of your creatures as easily as you can kill off his. Gangrenous Goliath was the first example of this, which killed off Alex’s morph, and then traded with a 4/4 Wretched Anurid, pumped through an Invigorating Boon when Shvartsman cycled a card when Fuller blocked the Anurid with the Goliath. When Fuller played the next creature, Shvartsman had to spend two creatures- a morph and a Spitfire Handler to kill off Fuller’s. Fuller then brought out Nantuko Husk and a morph to kill off Shvartsman’s creatures, and this exchange would be an ongoing theme for the rest of the match.

Things change, however, when the Death Match further renders cards such as Cruel Revival insane. The Cruel Revival killed off Shvartsman’s offending Avarax, and brought back the dead Gangrenous Goliath, which then killed off yet another one of Shvartsman’s creatures. Those of you who are keeping count will notice that that is a three-for-one trade right there. By this time, the life totals stood at ten to six, in Shvartsman’s favour. With no better options available to him, Shvartsman then decided to ask the perennial question: ‘Two creatures or no?’ with his Butcher Orgg, that could threaten to kill Fuller on the next turn. Sadly, Fuller’s hand did, in fact hold two creatures, which took down the Butcher Orgg. Noting that Fuller only had one card left in his hand, Shvartsman went for Barkhide Mauler, which killed one of Fuller’s morphs. Bear in mind that Fuller’s earlier Nantuko Husk was still on the table, since it is particularly adept at dodging death matches.

Then, Fuller peeled the second half of the combo that makes B-G such a brutal force. Symbiotic Elf off the top, sacrificed to the Nantuko Husk brought a grand total of three creatures into play on that one turn alone. Those three tables were enough to clean off Shvartsman’s side of the board, clearing the way for the Husk to finish consuming the Symbiotic Elf for the +6/+6 it took to take the first game for Fuller.

Drawing first, Shvartsman played out a second turn Wretched Anurid to try and put a speedy end to the second game. Fuller, who had opened with a pair of swamps took particular delight in cycling a Gempalm Polluter, prematurely stinging Shvartsman for one point.

A morph from Fuller saw a Spitfire Handler from Shvartsman, after which the Anurid took Fuller’s share out of the life total pool, evening the score at seventeen apiece. An Embalmed Brawler, revealing Aphetto Vulture came into play, followed by an Avarax. When Shvartsman drew his Gempalm Polluter- it became apparent that he lacked a second source of black mana. With the board position being what it had developed into, Shvartsman was actually in a position to race Fuller for damage, with the Avarax being able to hit for seven, should Shvartsman expend all his mana on pumping it. Unfortunately, Prowling Pangolin from Fuller threw monkey wrenches into just about every aspect of Shvartsman’s plans, and now damage had to be considered carefully.

The situation became even more bleak when Fuller played out a Stonewood Invoker, then reached seven mana. When Fuller played a morph, then revealed it later to be a Skinthinner which took out the Avarax, Shvartsman was now in a position of being in a low enough life total so that he couldn’t even double-block the Pangolin or the Stonewood Invoker, but was forced instead to chump block them. A second swamp for Shvartsman, all too late finally allowed Shvartsman to play his Vulture, but it too, headed straight for the ‘yard in the wake of incoming giants. With Shvartsman’s half of the board empty, Fuller just tapped eight, pumped his Invoker, swung for fourteen, and that’s all she wrote. As some movie quote once went, “Size does matter.”