Round 8: Ryan Fuller vs. Matt Vienneau 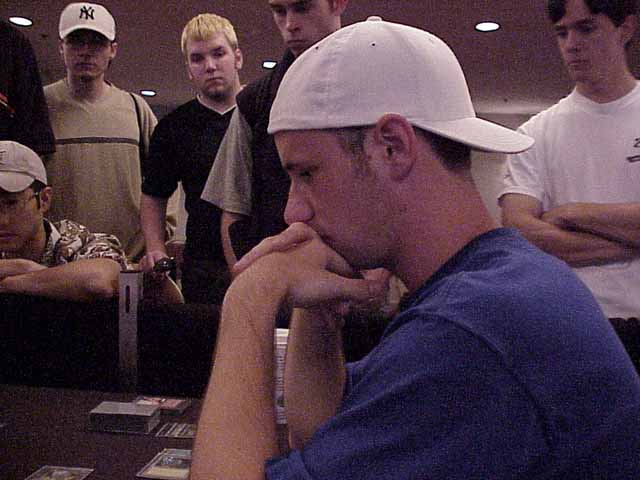 Ryan Fuller looked at his opening hand and screamed "Aw, Jesus Christ!" as he saw two Gaea's Cradles and no other land staring back at him. After losing what he thought was a favorable matchup to Gab Tsang's Accelerated Blue deck, Fuller seem very frustrated with his deck as he mulliganed.

Fuller played a turn 1 Treetop Village and a turn 2 Jaguar. (He could have played the Jaguar off a Forest on the first turn, but chose not to.) Vienneau played a Skittering Skirge and appeared to be playing a Control Black deck, quite possibly Flores Black. Fuller attacked, Vienneau blocked, Giant Growth saved the Jaguar, and then Vienneau started to unveil some technology. On his third turn Vienneau played a Peat Bog and then used Unearth to put Skittering Skirge back into play. Vienneau traded the Skirge for Fuller's Treetop Village and then Unearthed it into play again! Vienneau also played a turn 4 Chimeric Idol which looked really good until Fuller smashed it with an Uktabi Orangutan. 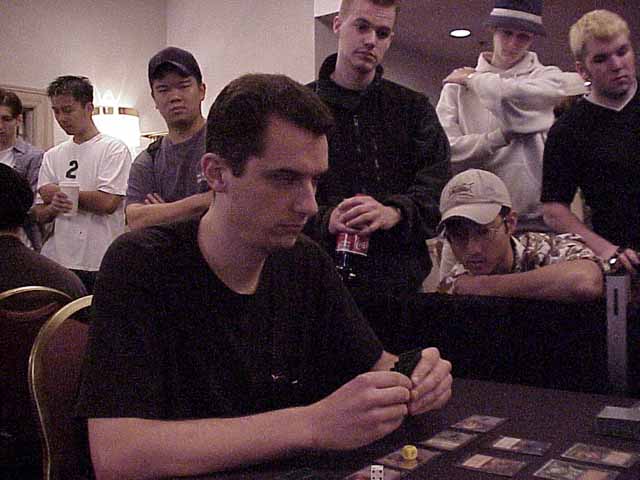 After trading the Skirge for Pouncing Jaguar, Vienneau used Unearth #3 to bring the Skirge back for a 4th go-round and also added Lurking Evil to his side of the board. Fuller proceeded to build up a swarm of green weenies. Eventually, Vienneau was forced to pay 7 life (going down to 6) to activate Lurking Skirge so it could block. Fuller tried to deal the last point of damage with a Wild Might, but Vienneau had Snuff Out ready and killed the Wild Vine Dryad. Vienneau seemed like he might stabilize while at 2 life, but Fuller top-decked a Rancor and that was the end of game 1.

Fuller didn't come out quite as aggressively as he could have in game 2. After playing a Wild Dog on turn 1 and seeing Vienneau play a turn 2 Skittering Horror (thanks to a Peat Bog), Fuller played a Forest so he could cast Wild Might. It would probably have been better for him to cast a second Wild Dogs plus a Gaea's Cradle. He could then tap the Cradle for Wild Might (to kill the Horror if it blocked) or tap the Cradle for 2 to cast Albino Troll. 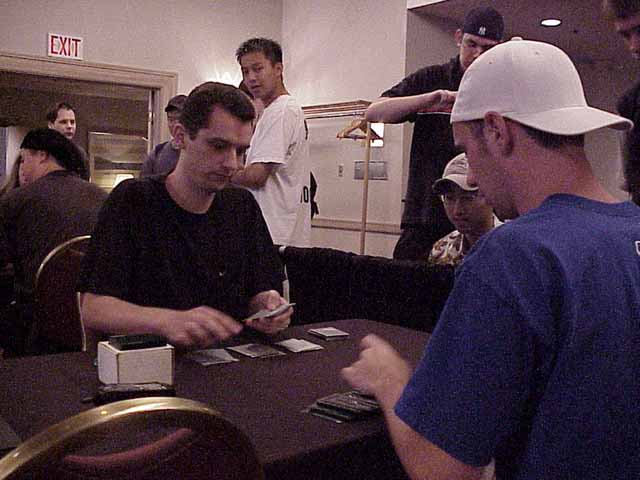 Instead it was Vienneau who had mad mana acceleration, using up his Peat Bog to cast both Chimeric Idol and Unearth (to return Skittering Horror to play) on his 3rd turn. Despite his slow start, Fuller did eventually cast two Albino Trolls and Vienneau never really came up with an answer to them. Neither Skittering Horror nor Chimeric Idol could block or attack effectively. Fuller could have locked the game up by playing two Tangle Wires and preventing Vienneau from even chump blocking. Fuller decided instead to play one Tangle Wire and leave open regeneration mana. However, Vienneau couldn't draw a Perish to punish Fuller for his misplay and Fullers Trolls did indeed go all the way.