Round 8: Satoshi Nakamura vs. Tsuyoshi Fujita 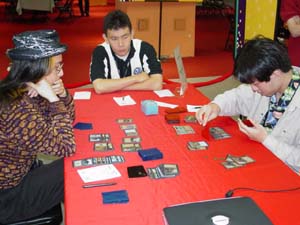 These two represent different parts of Japan's Magic history. Nakamura is the Old School, the first Japanese player to garner widespread recognition, thanks equally to his talent for the game and flamboyant style of dress. Fujita is the New School. The first Japanese player to break into a Pro Tour Top 8, drawing more attention to the strong Japanese pro community. Both breezed into Day 2 at 6-0-1 on the backs of Quiet Speculation. Their builds differ slightly, particularly in the sideboard.

Nakamura won the die roll and started the beats with a Basking Rootwalla, answering Fujita's Bird of Paradise with Wild Mongrel. Fujita played Call of the Herd, and traded with the Rootwalla. Short on mana, Fujita made a second Birds and a Mongrel.

Fujita started making 6/6's. Nakamura plucked Quiet Speculation and got three Roars. He would have just enought time to come out a Wurm ahead and a few life points to spare. His Rootwalla forced two more pitches from Fujita's Monrel. Fujita made a Wurm. Nakamura made a Wurm. With no cards in hand, Fujita ripped Wonder, sending it to the graveyard via the Mongrel and swinging for the win. 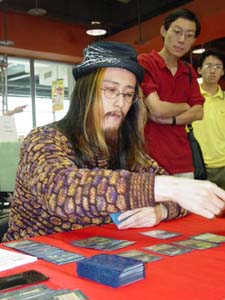 Nakamura had a potent opening in Game 2. He started with werebear, and when Fujita answered with Looter, he played Wild Mongrel and Quiet Speculation. This time he got Krosan Reclamation, Roar of the Wurm and Deep Analysis, showing the strength of his sideboard.

Fujita came back with Bird and Merfolk Looter. Three Mongrel pitches, including two Wonders, put Nakamura at threshold and he hit for nine in the air. It looked like the game would be over quickly.

Not so! Fujita came back with what amounted to an elbow to the face: Opposition. What made it all the sweeter was that it was a last-minute sideboard swamp for an Upheaval. Nakamura's force was stopped in its tracks. Nakamura's veneer of calm remained intact. He flashed back his Analysis, looking for a solution. Fujita made more Icy Manipulators, this time a Spellbane Centaur and Bird of Paradise.

Nakamura resolved a second Speculation, this time fetching two Roars and a Ray of Revelation. The tutor-power of the Speculation was in full effect. The Opposition dispatched by the ray, and Nakamura was back in control. Fujita rallied with a Speculation of his own, minimized by the Krosan Reclamation. Nakamura swung in, dealing damage but unable to push through too much damage.

Meanwhile, Fujita drew another Speculation, getting the last Roar and some Calls. Nakamura got some Looters working, and started adding 4/4's to the board. When he had enough creatures, he attacked, holding two Circular Logics in hand. One more attack did Fujita in. 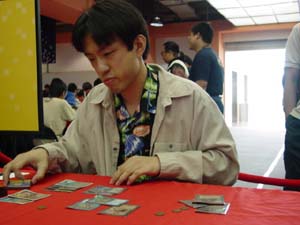 In the deciding game, Fujita mulliganed away an unexciting draw of four land, Ray of Revelation and two Arrogant Wurms. Fujita came off the blocks like gangbusters. First Elf, then Call, then Mongrel and Elf. Nakamura played defensive, using Careful Study to get rid of Wonder and Roar of the Wurm, then setting up a turn-three Roar with Werebear.

Fujita matched his Roar, and ran it into Nakamura's. A second Roar was stopped in the graveyard by Krosan Reclamation. Nakamura, however, had very little action. Fujita finally ripped island and broke the game open with Quiet Speculation. The Reclamation softened the blow, but things were still bad.

Next turn Fujita tapped out for Phantom Centaur and Merfolk Looter. Nakamura checked his top card, and then scooped.