Round 8:
Scavenging for Scraps

There are very few players that have had as hot a stretch of time as Swede Denniz Rachid had over the previous season. With consecutive Pro Tour Top 8s at Pro Tours Dark Ascension and Avacyn Restored, Rachid had a run matched only by Jon Finkel himself. Vidugiris is having quite a good run himself, finishing second at Pro Tour Avacyn Restored and winning Grand Prix Atlanta a couple of months later. 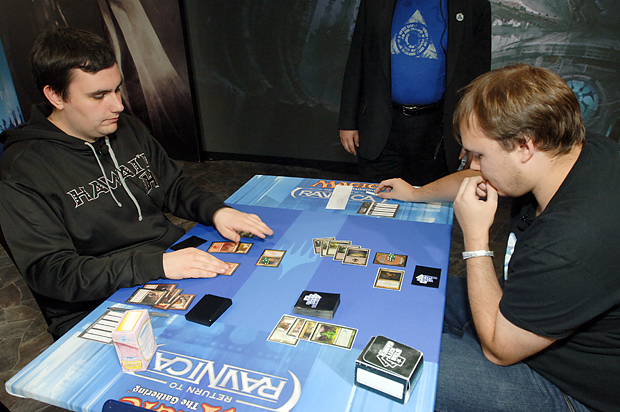 Both Denniz Rachid and Gaudenis Vidugiris had phenomenal years with the game, and both were looking to start off the new season strong. A win here would keep that possibility alive.

Vidugiris began with a mulligan on the play. In this incredibly slow-paced opener, neither player had a play before breaking the silence on the third turn of the game. Both players had reptiles, though Vidugiris's more feral Stonefare Crocodile outclassed Rachid's more evolved counterpart, Viashino Racketeer. When Vidugiris made a hasty Dreg Mangler on the following turn, he took a quick advantage, dropping Rachid to 17. Rachid took the lead right back on his turn, using Annihilating Fire to kill the Crocodile before suiting his Racketeer up with a Deviant Glee and sending him out for a smashing good night on the town.

Vidugiris continued to add to his board, making the incredibly tall Towering Indrik, which had the perfect power and toughness to force an exact trade with the Racketeer on Rachid's next attack. After placing his creature in the graveyard, Rachid unleashed a Spawn of Rix Maadi. Vidugiris thought he had a good answer in the form of the deadly Sluiceway Scorpion, but a quick Stab Wound gave the Scorpion an even more lethal sting. Rachid's Spawn dropped the defenseless Vidugiris to 10, but it still wasn't enough to put him ahead. Vidugiris's Mangler had been attacking since the fourth turn, dropping Rachid all the way down to 8 in the interim. 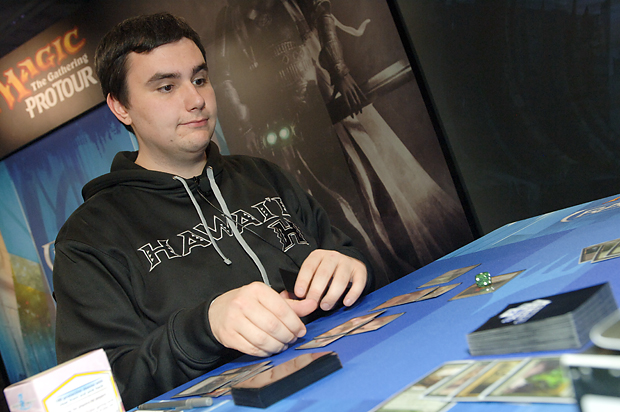 Rachid attempts to dig through a flurry of lizards and gruesome Golgari creatures.

Vidugiris continued making creatures, this time a 4/4 Ooze with a Slime Molding. The Slime was allowed to exist for precisely one half of a turn before being sacrificially offered in a trade with Rachid's Spawn. Rachid replaced the Spawn with a second, giving himself yet another massive creature, but still not one that could block. Vidugiris attacked Rachid down to 5 before using a Slum Reaper to clear away the board, leaving Vidugiris with the Reaper as his only creature. Rachid used Stab Wound to fully clear the board, and both players found themselves with no offense, a situation that thoroughly favored Vidugiris.

Vidugiris had an incredibly fast start, going with the one-two punch of Dredge Beetle and Stonefare Crocodile to begin the game. When he added a Dreg Mangle on the following turn, Rachid looked in trouble. Vidugiris was attacking for 8 damage, and Rachid had a mere Daggerdrome Imp in play on his side. He declined a chance to block, dropping to 10. He attacked for one on the following turn, driving himself back up to 11 before literally gumming up the board with a Catacomb Slug. The massive rear end on the 2/6 Slug provided a large wall for Rachid, capable of killing off two of Vidugiris's potential attackers.

On his turn however, Vidugiris gave Rachid a portent of things to come, and they were not pretty. Demonic not pretty. A Grisly Salvage found Vidugiris Desecration Demon, a game-ending bomb. Unable to cast it that turn, Vidugiris simply added a Slitherskull and an unleashed Grim Roustabout to his team. He was leagues ahead in this game and was about to put himself even further. 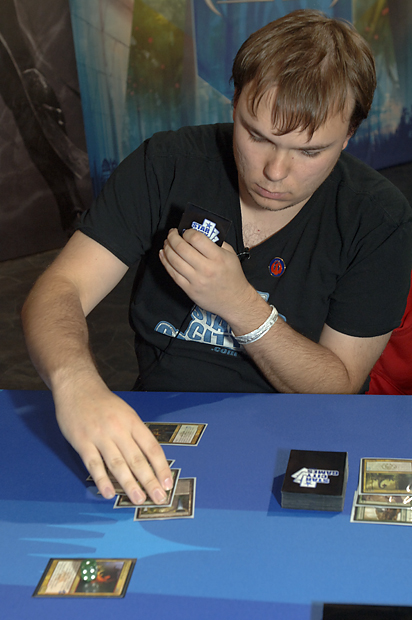 Rachid tried to put himself in a situation where he could have a relevant attaker and still be able to sacrifice creatures to stave off the Demon. He added a Spawn of Rix Maadi to his team, but that still only left him with three creatures to Vidugiris's five. When Vidugiris added the Demon to his side, a two creature advantage became three. He decided against attacking with his team, content to wait for the Demon to get busy. Rachid found a way to get past the massive number of creatures on Vidugiris's side with a Rogue's Passage, sending his Spawn in unblocked to drop Vidugiris to 13. Just a few turns of holding on and he might be able to pull this out.

But then Vidugiris, who had been systematically putting the nails in Rachid's coffins for the entire game, put the hammer down on the final one. A Rites of Reaping killed the Spawn of Rix Maadi and pumped his Crocodile. He then sent his two six-power creatures to attack. Rachid declined to sacrifice a creature to the Demon, content to just chump block with his Imp, dropping to 7. He tried a Viashino Racketeer to dig for something useful, discarding a Rakdos Shred-Freak and passing the turn with five lands available. When Vidugiris went to attack, Rachid used his Viashino as sacrificial fodder to keep the Demon satiated. Even without the Demon, Vidugiris still outnumbered Rachid five creatures to one. All it took was sending them all in for Rachid to shrug and pick up his cards.