Round 8: Sean Buckley vs. Morgan Douglass

7-0 is quite a feat, but both of these competitors had the best kind of help: Three byes. Morgan Douglass you might remember from his Top 8 performance at Grand Prix – Detroit. His opponent is Sean Buckley, who's as surprised as anyone that he's undefeated. He won a Trial to get his byes, and he's put them to good use. Both are playing Goblins, though their builds differ. 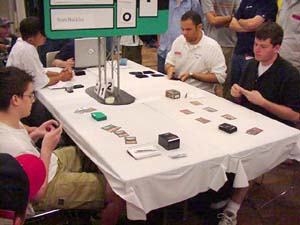 Buckley mulled to six and kept a gambling one-lander. He ran his Skirk Prospector into Douglass's Sledder, but stalled at one land. He found a second in time to Hammer a Warchief from Douglass, but that was followed by a Good. He didn't have any illusions that his Sparksmith would stay on the board very long.

It didn't. Firebolt took it down and a second Warchief joined the fray. A turn later the game was over.

Nearby Osyp Lebedowicz was surprised at the shortness of Douglass's game, but then noted his opponent's mana screw. 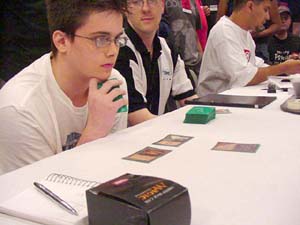 Both players kept their opening hands for Game 2. Douglass was first on the board with Goblin Sledder. Buckley came back with Piledriver. Douglass acted unconcerned. He made a Sparksmith and gave it back. Buckley swung in with his Piledriver and Douglass double-blocked. Buckley tried to gain advantage with a cycled Incinerator, but Douglass just sacrificed the Smith to the Sledder, bolstering it to 2/2.

Douglass added a Warchief and smashed in. Buckley used an Eruption to get rid of it, but had to leave the Sledder on the table to do it. Douglass kept firing, this time a Raging Goblin and a post-combat Piledriver. Buckley upped the ante with Siege-Gang Commander.

Douglass Firebolted the Commander and swung in. He traded his Sledder for two tokens and dealt five. Buckley was at just nine. He had no fear, thanks to a second Siege-Gang Commander. Douglass thought, then dropped another Raging Goblin and swung in with his team. The tokens took down the Piledrivers, and Siege-Gang jumped the Raging Goblin. Buckley was at eight, and Douglass had almost no board.

Another Siege-Gang Commander hit play for Buckley, and things were looking grim indeed. Buckley played it cautious, worried about his low life total. Gempalm Incinerator took care of one of the Commanders, but Buckley played out Warchief and Clickslither and smashed in, bringing Douglass to seven and leaving him with just Raging Goblin. Douglass decided he didn't need to play another turn. 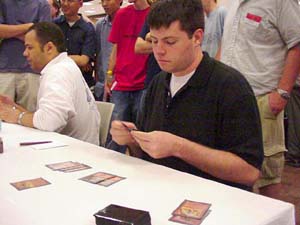 Buckley was first on the board with a Skirk Prospector, and cycled a Gempalm Incinerator to get rid of Douglass's Sparksmith. It was replaced by a Goblin Warchief that met a similar fate. Unfortunately, Buckley failed to draw his third land, and had to pass it back after hitting with his Prospector. Douglass had four mountains and debated his options.

He raw dogged a Fledgling Dragon and gave it back to Buckley. He read the card and played out a pair of Sledders, hitting for one with his Prospector. Firebolt took care of the Prospector, and Douglass gave it back. Buckley tried cycling another Gempalm Incinerator, but Douglass had one of his own, reducing the number of goblins in play to just one. On his turn he Firebolted the remaining Sledder and sent a Hammer to the dome. The now-thresholded Dragon dealt eight. Buckley drew and looked for a card that doesn't exist.