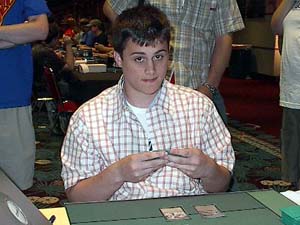 Sean Buckley is a seventeen-year-old Magic player from Connecticut whose only Pro Tour points are from Grand Prix: Atlanta, though he says he is already qualified for Pro Tour: Columbus. William Jensen, or "Baby Huey" as he is more widely known, is a name that need little introduction He has four Pro Tour top 8 finishes, including a win with his team The Brockafellers at Pro Tour: Boston. Huey is widely considered one of the best Limited players in the world, and one of the best American Magic players period, though many Pros wonder what kind of success he could have if he actually played more consistently. His attendance at Magic events has been sporadic lately, to the point where it's actually a surprise to see him attend a non-Pro Tour caliber tournament.

Up until this round, Huey's decision to show up was gold, as he chewed through the competition like it ain't no thang. Until, that is, he met up with Buckley. In spite of some mistakes from the young New England native, Sean managed to overwhelm Huey in both games 1 and 3 thanks mostly to Cranial Plating, Furnace Dragon, and some resource issues for Huey.

Buckley got out to an early lead in game 1 with help from Cranial Plating, Myr Enforcer, Blinkmoth Nexus, and Disciple of the Vault. Huey stalled on two land, but was able to stay alive through a series of crafty trades with Buckley's men, as Buckley made mistakes like forgetting to make Huey lose life from a Disciple. In the end it didn't matter though, as Huey couldn't draw a Blue source for the Thoughtcasts in hand, and a second Nexus eventually flew over to finish the job.

Game 2 saw Huey take the early Cranial Plating advantage this time, but Buckley countered with an Arcbound Ravager. Disciple of the Vault plus an emphatic Somber Hoverguard on turn 3 from Jensen put Buckley under the gun, and Huey ended the game on the next turn by playing a Ravager of his own and swinging/saccing for the win, without ever needing to use the Shrapnel Blast in his hand.

Two early Chromatic Spheres from Buckley in Game 3 plus a turn 3 Pentad Prism indicated he was quickly ramping up to Furnace Dragon mana, which he cast on the fourth turn, following that up with an Ravager, and leaving Huey with only a Somber Hoverguard in play. Jensen recovered somewhat on the following turn, laying a land and casting Paradise Mantle, but the Dragon had done its job, as he couldn't find more than two land for the rest of the match, and succumbed to more Nexus/Plating beats.

Herbs: Huey, what do you side out for the mirror?"

Huey: "I don't know. I just side out one of everything, really. I've always done that when I'm not sure what the right play is. I almost won both of those games where he beat me. He made enough mistakes to give me extra turns, but my deck didn't cooperate."