Round 8: Sigurd Eskeland vs. Ryan Fuller 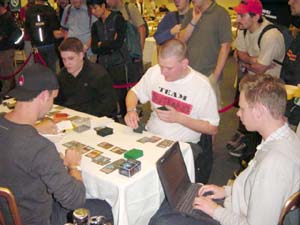 Sigurd won the die roll and elected to go first. Sigurd is with a black, blue and white deck and Ryan is playing red, black and blue.

Ryan managed to play a Nightscape Familiar on turn two which Sigurd didn't look too happy about. Sigurd kept testing the waters with threats to see if Fuller would respond with a counterspell, first with Vindicate on an Island (which was Undermined) and then with a Fact or Fiction (which resolved). This netted him another Fact or Fiction and two more lands so he could develop his mana base.

Next, Sigurd managed to resolve a Gerrard's Verdict - Ryan discards a land and another Familiar. The very next turn Sigurd had yet another Verdict which this time met with an Undermine. Eskeland was ready with a Dromars Charm to force it through, removing Exclude from Ryan's hand.

None of this stopped Fuller from attacking with his Familiar and Pyre Zombie, at least until Sigurd got a Spectral Lynx into play. Sigurd was fairly low on life and Ryan started aiming Urza's Rage on him. Sigurd used his fourth Dromars Charm to gain five life at the end of his turn but the Lynx got Recoiled and Sigurd discarded Fact or Fiction. 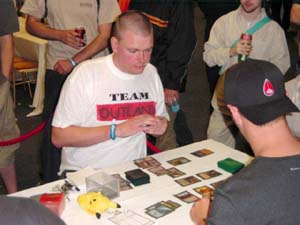 The Pyre Zombie was beginning to look problematic for Sigurd but he calmly tapped his seven lands and played Desolation Angel with kicker leaving Fuller with no way to start recurring the Zombie. Spectral Lynx came back shortly to help hold the ground, trading for a Nightscape Familiar and Ryan could only bitterly smile as the Angel kept attacking in the air.

Both players did very little in the early turns, just playing lands and passing. Sigurd was the first to play a spell, with a Recoil targeting one of Ryan's Salt Marshes. Ryan thought for a long period of time before finally deciding to Undermine it. As Ryan had tapped out this let Sigurd play Lobotomy on Fuller taking two Yawgmoth's Agenda cards from his hand. This left Ryan with Urza's Rage, Recoil and Undermine but Ryan didn't exactly look overjoyed.

Sigurd tried for a Vindicate on Salt Marsh which this time Ryan chose to let resolve. Sigurd had another Vindicate though next turn and targeted Ryan's second Salt Marsh (his only remaining source of black mana) and so Ryan attempted an Undermine but Sigurd had the Gainsay. Sigurd looked to be very much in control of the game as he played out Spectral Lynx as well to start attacking. 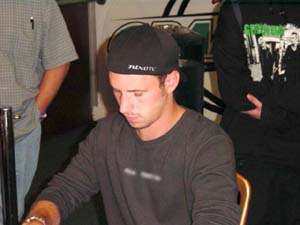 Ryan decided to try for Nightscape Familiar as a defense, Sigurd simply cast Fact or Fiction giving Ryan the choice of split between Probe, Lobotomy and 3 land. Ryan thought for a long time, holding his head in his hand letting Sigurd take the Probe and a land with a resigned look on his fact. Probe with kicker resolved during Sigurd's main phase, with Ryan losing an Urza's Rage and Island and furnishing Sigurd with a second Lynx.

A third Lynx a couple of turns later just got a nod and sigh from Ryan who could do nothing except pass the turn back to the Sigurd, who kept attacking with his cats. One of the Lynxes got Recoiled and Ryan thought for a long time during his turn, looking for a solution. When the third Lynx tried to come back into play the next turn it was met with an Undermine.

Sigurd drew into a Recoil and bounced the Nightscape Familiar attacking with both Spectral Lynxes taking Ryan to 1 life. Ryan tried to Exclude his own Familiar when he cast it on the way back down but it was to no avail and he conceded.