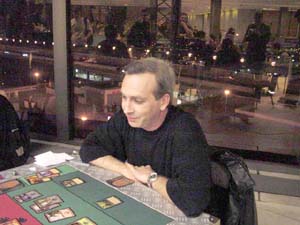 Van der Velden started with a very aggressive elf draw, dropping a turn 1 Birchlore Rangers and using a Timberwatch Elf to pump it and then following that with a Symbiotic Elf. Petit brought things a little more under control with a Skirk Marauder.

Van der Velden then dropped a lot of creatures onto the table thanks to the help of a Wirewood Channeler and dead Symbiotic Elf.

A second Smokespew Invoker hung around for the Dutchman and got active to remove Petit's Skinthinner the turn before a second swamp arrived. The Frenchman had plenty of rares to help: Gigapede to dissuade van der Velden from attacking and then a very scary Dragon Roost.

The Dutchman found a Timberwatch Elf right on cue and sent in his army with a Taunting Elf to put through enough damage to leave Petit on a vulnerable one life. The Roost couldn't make enough Dragons to prevent all of van der Velden's creatures swarming in for that crucial last point of damage on the next turn.

"Number 8 for the Taunting Elf," 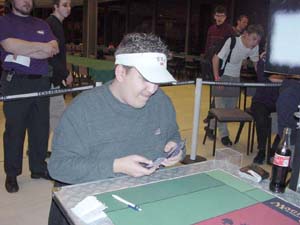 Both sides built up their forces with a couple of morphs and a Symbiotic Elf. Petit took care of van der Velden's morph with a Marauder and then both put 3 power clocks on the table: a Covert Operative from van der Velden and a Sootfeather Flock from Petit.

While they raced van der Velden summoned a couple of morphs and then Petit upped the ante with a Macetail Hystrodon. The Dutchman had a couple of insect tokens to chump the Hystrodon and then a Totem Speaker to maybe claw a bit of life back in the race.

Goblin Grappler combined with Crown of Suspicion got rid of van der Velden's racer only for him to replace it with another hard to block creature in the form of Elven Riders.

Van der Velden took a risk on the next turn to let the Hystrodon through rather than chump again. Unfortunately Petit had a Primal Boost and it was time for a decider.

Neither player found any gas in Game 3. No creature hit the table until a Totem Speaker for van der Velden on turn 5. Petit raised him a Gigapede.

Crown of Suspicion cleared the Ranger out of the way for the Gigapede. Petit shored up with a Crown-of-Furied Elvish Warrior.

The next few turns were explosive on either side. Morph and Timberwatch Elf showed up for van der Velden while Petit mashed face with a Macetail Hystrodon. Van der Velden traded a morph to keep the Gigapede out of the way temporarily and attacked back for nine. Then the Dutchman dropped a bomb: Essence Fracture sent Petit's team back to his hand.

The Frenchman couldn't return from such a devastating loss of tempo and Stan van der Velden booked his place into day two.