Round 8: Stephan Meyer vs. Anton Jonsson 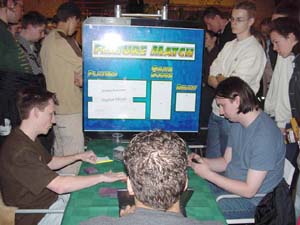 Anton and Stephan are playing for the right to possibly make day 2 as one of the lucky 6-2 players that make the cut. Anton has been complaining about his deck all day but his three byes and playing skills got him a decent record anyway. Stephan Meyer is trying to win his second Rochester Draft Grand Prix; he won one back in the triple Odyssey days.

Their byes and the low number of people actually gives these two players quite a good chance to make it to day 2 but it's always rough to 6-2 and miss on tiebreakers.

Stephan decided to draw first and Game 1 got underway with no mulligans on either side.

Both players had a mountain to go with their forest but Anton had no more lands to add to those two. Stephan tried to take advantage of the situation with a morph guy and a Snarling Undorak. Anton then managed to draw his third land and morphed a creature of his own.

Stephan decided to Shock Anton's morpher and attacked with his own and the Undorak. Surprisingly, he decided to morph his Haunted Cadaver and sacrifice it to make Anton discard. Anton, manascrewed, had lots of cards to dump anyway. Stephan then made a Rotlung Reanimator to further put up the pressure on Anton. Never seeing a fourth land Anton had no choice but to scoop up his cards when Stephan showed him a Solar Blast.

This game it was Stephan's turn to be manascrewed but, like Anton, he drew his third land immediately. He made a Rotlung Reanimator to make sure he wouldn't get overran. In the meanwhile Anton never drew his fourth land either and when Stephan did the turn after drawing his third he could only shake his head at his considerable bad luck.

When he drew the fourth land the best he could manage was a Heedless One which was a grand total of 1/1. It id manage to kill a morphed Snarling Undorak as Stephan had not drawn his second green mana yet. A Sparksmith, a Battering Craghorn with Lavamancer's Skill and a Skirk Commando put Stephan in a horrible position from which he seemed unable to recover without access to his red or second green mana. A Charged Slateback put him further behind and the decision to scoop wasn't hard to make.

Both players had fine mana draws for a change and it wasn't long before the board was clogged up with creatures. Anton's Charging Slateback and Symbiotic Elf looked good against David's morph guy and 2/2 tokern but when the orph guy turned out to be a Haunted Cadaver emptying Anton's hand the tables seemed to turn. A Cruel Revival on the Slateback returning a Rotlung Reanimator made matters even worse and when Anton said go without playing a creature the game seemed to be close to over.

Then Silvos came down. A perfect example of the immense power of some of the rares in this set Silvos completed turned the game around. What looked like a losing position for Anton suddenly turned into an even, if not good, one. Silvos can't do everything all on it's own though. Anton summoned a Spitting Gourna to hold the fort and swung with Silvos. Stephan's deck pulled him through and Stephan drew a Death Pulse to off the Gourna and counterattack. This gave Stephan the opportunity to race the Silvos if Anton didn't have another creature. Anton had a Sparksmith to block though and Stephan needed to get it out of the way for his attack to be lethal. A Shock did just that and Stephan advanced to 6-2 and has to pray...