Round 8: Stephen Campbell vs. Toshiki Tsukamoto 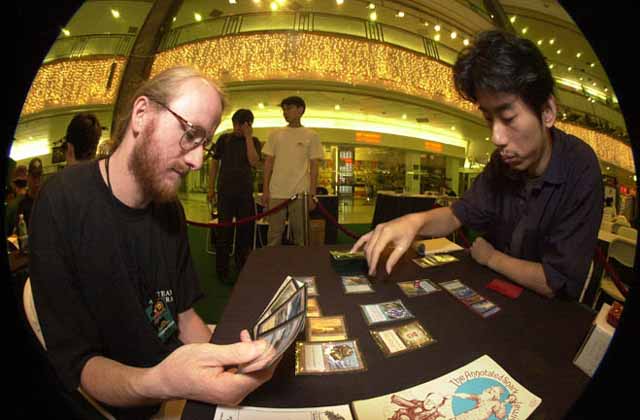 The spectators crowded around to see this widely anticipated feature match: two-time Japanese champion Toshiki Tsukamoto versus reigning Australian champ Stephen Campbell. Toshiki was playing a run-of-the-mill Replenish deck, but Campbell brought a wacky white-blue control deck to the table that he used to win his national title. Nicknamed "Boojum," his deck had lots of tricks, using cards like Mishra's Helix, Rising Waters, Parallax Wave, and Monk Idealist to secure a victory. Campbell didn't do much to disrupt Tsukamoto's strategy in the first game. He used Monk Idealist and Raven Familiar as attackers, but had nothing else to play. Tsukamoto Attuned twice, cast Frantic Search, and then Replenished to bring out Seal of Removal, three Parallax Waves, two Attunements, Parallax Tide, and Opalescence. Campbell tried to save himself with Wrath of God, but Tsukamoto saw that he could use Parallax Wave to save most of his enchantments. Rather than watch Tsukamoto agonize for ten minutes over which enchantments to preserve, Campbell said, "Okay, never mind. I concede." 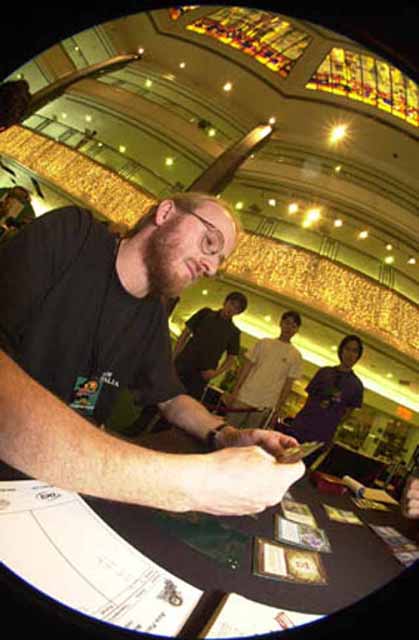 Campbell sideboarded nine cards in against Tsukamoto, but saw none of them in the second game. He tried to use Rising Waters to shut down the Replenish deck's development, but the Waters were destroyed with Seal of Cleansing. Tsukamoto Attuned three times as Campbell mounted a hopeless attack with Monk Idealist. Parallax Tide followed by Replenish with Counterspell backup spelled doom for the poor Australian. Tsukamoto took the match 2-0.