e arrived at the final round of Day 1 with two competitors standing at the precipice. Robert Jurkovic of the Slovak Republic was matched against popular Japanese player Kenji Tsumura. Facing elimination, sitting down across from one of the world's best is not exactly the pairing you're looking for. Yet Jurkovic was definitely doing something right on the day. The Slovakian came with four wins and nearly the exact same deck as Kenji. Recognizing a blue-black control mirror, the competitors and audience settled in for a potentially grueling match. 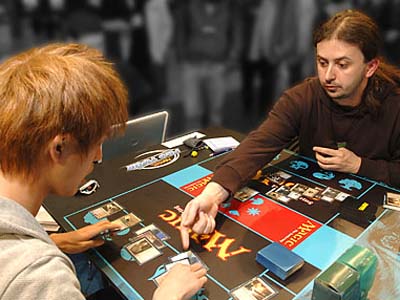 As the control mirror often does, these games began with both players playing lands and saying go. Time Spiral adds an extra wrinkle with format-popular storage lands, giving the players extra routes of mana production. Both started with a double Dreadship Reef opening, although Robert fell behind as the first person to miss a land drop, and against Kenji's Prismatic Lens and Phyrexian Totem besides. There was a little back and forth with a Teferi, Mage of Zhalfir from Jurkovic, but the first major move came with a resolved Haunting Hymn against Tsumura. Kenji threw a Shadowmage Infiltrator, Teferi, Vesuvan Shapeshifter, and a less devastating Mystical Teachings into the graveyard.

Tsumura added plenty of mana to suspend his Aeon Chronicler for a whopping seven counters, down to a single card. Against a defenseless opponent, Robert considered his options, ultimately deciding to search for an Extirpate and wipe out his opponent's Mystical Teachings. Kenji showed his last card, Brine Elemental, which looked pretty solid alongside a Reef with plenty of counters. Kenji decided not to play the creature, remained content to draw two cards and (later) make Assembly-Worker [no autocard] tokens off an Urza's Factory. For his part, Robert was happy to continue adding charge counters and flashback his Mystical Teachings for a fresh one. Kenji simply created more 2/2s. In this reporter's eyes, there's nothing more classy than using your Two-Headed Giant partner's Pro Player cards to represent smallish artifact creature. The army of Rich Hoaens continued to grow, and Robert's life total continued to shrink.

Yet Robert seemed unconcerned. His Teferi was Canceled, but his Shadowmage Infiltrator stuck as a smallish speed bump. Finkel was merely bait, though, as Robert hoped to resolve an Urborg-powered Tendrils of Corruption against one of the Hoaen tokens. Kenji calculated for a good couple of minutes before deciding to aim a Tendrils of his own at the token, gaining plenty of life for himself. Urborg is quite the double-edged sword. Robert was getting seriously low in life, and Kenji's morph resolved and threatened further damage. That 2/2 immediately transformed into a 5/4, costing Jurkovic an untap step. Admittedly, that would have been far more damaging if Jurkovic didn't have an untapped Dreadship Reef absolutely laden with beads. Indeed, Robert began his turn by removing five of the counters to play and flip a Shapeshifter, copying Kenji's Brine Elemental. Morph wars are exhausting! 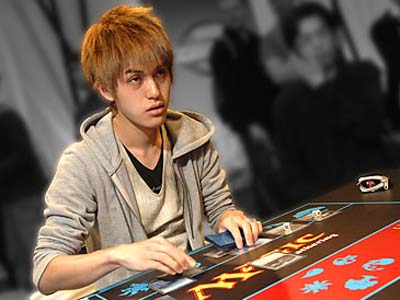 Kenji Tsumura, former Player of the Year, is on the bubble to make Day 2.

A flicker of concern crossed Kenji's face at this point. He did have some mana to work with, but for the most part he was getting locked out. His Chronicler finally resolved but met an immediate end via Robert's Tendrils, and now Jurkovic was in a commanding position. His second Shapeshifter forced Kenji to pull out another die. Instead of measuring charge counters or suspend counters, this die was for counting "skipped untap steps," a very depressing quantity to record. Kenji gave it one last shot, getting up to four mana and attempting a Damnation. Robert was easily able to seek out a Cancel, and Kenji conceded, seeming furious at himself for giving his opponent a path back into the game.

Both players kept their hands for this second game. Both spent their first few turns massaging their storage lands, although Kenji again pulled ahead with a Phyrexian Totem. Robert fought back with a second Reef and the game slowed to a crawl. Kenji made the next "move" with a Think Twice. One may ask how important these storage lands are here. Kenji had the opportunity to flash back his Think Twice, but instead chose to charge his Reefs instead. In this matchup, more mana was at least as important as another card.

The "land, go" pace couldn't be sustained, and the players began to feel each other out with teaser spells. Morphs took Tendrils, Teferis were hit with Cancel or Sudden Death, and so on. Tsumura seemed to have the smallest of edges in both mana and cards here, but it was enough to pull ahead. Out came one, two Shadowmage Infiltrators, and they started to hit. The players maintained their dance of move, response; guy, kill, but the Finkels continued to sting. Jurkovic couldn't keep up with the race, and Phyrexian Totem and both Infiltrators finished the job. 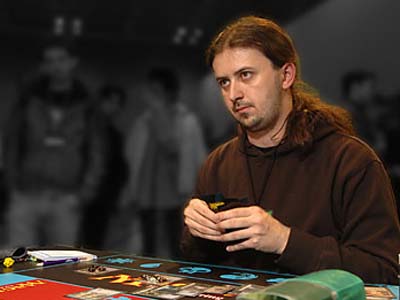 Robert Jurkovic stands his ground against one of the best in the world.

With 12 minutes left, both players knew a draw was deadly here. Kenji felt the pressure and gambled on a two-land hand on the play (Robert chose to draw). Kenji missed a land drop and had to discard, but Jurkovic couldn't capitalize with some missed lands of his own. Both players drew out of the situation at the same time and once again began their maneuvers of action and riposte. Neither player could get an edge in, either through their cards or because they were unwilling to gamble on aggression. One could see the frustration mounting as Tendrils and Cancel and Damnation flew back and forth. Tsumura played all four of the Damnation in his deck, which should give you some idea on what the board regularly looked like. Jurkovic played his kill and counter spells when necessary. And just like that, Sheldon Menery announced that the match was finished, an active Urza's Factory on Jurkovic's side against an unwinding Aeon Chronicler on Tsumura's. The final five turns played out as expected, and then the match was over.

The players had been silent for almost the entirety of the match, and no one spoke now. Shouts of "Concede!" peppered out of the sizeable audience, although it was anyone's guess whom those shouts were directed towards. In a fairly deft move Jurkovic slid the blank match slip to Kenji, giving Tsumura-san the onus of choosing a draw or concession. Kenji stared at the blank match slip for a number of pregnant seconds, while Jurkovic did his level best to look indifferent. In the end Kenji wrote the result as a draw and got up, disgusted. Whether that feeling was directed at himself, his opponent, or merely the situation was not clear. Regardless, neither Robert Jurkovic nor Kenji Tsumura will be playing on Day 2.