Round 8: Suspending their Sentence

After a free mulligan, Paquette considered, then threw back a hand of Island, Island, Foresee, Lord Ith, High Arcanist, Temporal Isolation, Mana Tithe, Knight of Sursi. It was the kind of hand that would be absolutely incredible if he could somehow know there were a Plains on top of his deck. That's why PT-level judges are so strict about immediately replacing all sleeves with visible wear and tear. But with no guarantee of Plains, the hand was too risky, and Aeo threw it back. He came up with Infiltrator il-Kor, Errant Ephemeron, Snapback, Primal Plasma, Plains….and Island. What a sick six-carder. Even without any more lands, he had an incredible amount of power he could deploy. 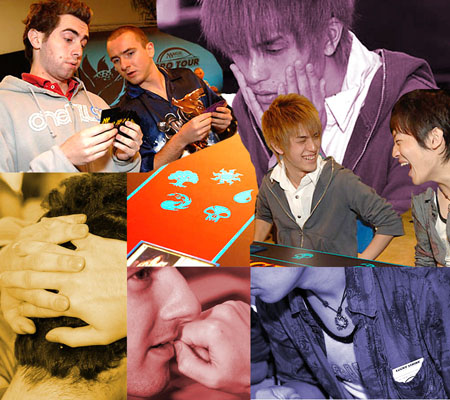 Kenji threw back a hand and came up with a keepable Deepcavern Imp, Homing Sliver, Vampiric Sliver, and four lands. When they got hold of a Sedge Sliver and knew Future Sight had common red slivercycling Homing Slivers to find it, they jumped into the Sliver side of the swimming pool. But Deepcavern Imp and other non-Sliver creatures show that his team didn't crank the Sliver lever all the way to full, allowing non-Sliver creatures into the deck. Hirosawa had Gemhide Sliver, Reflex Sliver, Malach of the Dawn, and multiple Plains and Swamps. No Forests, but he went with it.

And they were off: Hirosawa found a Forest in time for turn-two Gemhide Sliver, only to have it Feeblenessed. Paquette suspended a threatening Errant Ephemeron.

The Japanese got evasive with Spirit en-Dal and Deepcavern Imp, going 30-28. Aeo suspended an Infiltrator il-Kor, while Jeff stayed quiet with

On the fourth turn, Hiro played Reflex Sliver, followed by Kenji's Vampiric Sliver, and all kinds of guys got in there: Vampiric, Reflex, Deepcavern, and Spirit en-Dal. Cunningham flashed out Constructed mainstay Sulfur Elemental, killing Spirit en-Dal on the way to trading with a Sliver. Offered the choice of offing the 3/3 Vampiric Sliver or the more relevant ability on the Reflex Sliver, Cunningham decided that size mattered and killed the 3/3. The tempo of the Japanese attack was really blunted by the efficiency of Sulfur Elemental's three-mana, instant-speed two-for-one trade, and the score was only 30-24. If Cunningham had had no play there, the attack would have dealt 9 with four attackers still out.

Paquette made a tricky blocker in Tolarian Sentinel, while Cunningham played Lost Hours and suspended a Keldon Halberdier. The Canadians had really banked on suspend this game, giving up early board presence for more power in the midgame and an efficient use of mana across the early turns. When the suspended creatures came online, the advantage would likely swing massively back in favor of the Canadians.

Jeff's Lost Hours revealed plains, Utopia Vow, and Malach of the Dawn, of which the Angel was sent into the future, three cards down.

Infiltrator il-Kor was the first Canadian suspended monster to appear, and started doing the 3 things he does best: damage. A flying 2/2 Primal Plasma showed up for Paquette in time to block Deepcavern Imp, and it looked like the Canadians were containing the Japanese offense in time for the suspended army to come online. 16 Canada - 27 Japan.

Kenji showed another non-Sliver in his deck: Jaya Ballard, Task Mage. The Canadians had a lot of gas to back up their suspends: Paquette had Snapback, Mana Tithe, and Castle Raptors, while Cunningham had Tendrils of Corruption, Stronghold Overseer, Big Game Hunter, Mirri the Cursed, and Henchfiend of Ukor. It was clear to the Canadians couldn't let Jaya stay on the board. The question was: should the white-blue deck remove Jaya while black-red made a creature? Or vice versa? Cunningham calculated from his Lost Hours that Hirosawa would draw Malach of the Dawn next turn with six lands and Utopia Vow, then decided that Mana Tithe needed to stay operational. Snapback hit Jaya, while Mirri, Infiltrator il-Kor, and Errant Ephemeron hit the Japanese hard. 16 Canada - 17 Japan.

Just as the Canadians anticipated from Lost Hours, on turn seven Hirosawa made Malach of the Dawn, then walked Utopia Vow into Paquette's Mana Tithe. Kenji summoned Jaya Ballard again, then a hasty Homing Sliver. The Boa and Slivers went in, taking the Japanese closer at Canada 10 - 17 Japan. With all this flying, haste, and Swampwalk, the match was definitely ending in a hurry.

Infiltrator and Ephemeron thundered across for 7, tying the score at 10-10. Jaya died to Tendrils; 12-10. Castle Raptors and Mirri held the Japanese team at bay except for Mire Boa, who took 2 life points while Hirosawa summoned its identical twin.

On turn eight, Cunningham's Stronghold Overseer and Keldon Halberdier both arrived, putting pressure on the Japanese to find a 10-point breakthrough immediately. With some mental math, the Candians knew they couldn't win this turn but almost certainly would next turn, with Stronghold Overseer joining the attack force. So all they needed to do was survive one more turn, and they held most of their troops back for that purpose.

The Japanese got the Boas through, for Canada 6 - 7 Japan, but they could not find a breakthrough, and the Canadians enormous flying and shadow forces took the game.

It was incredible how hyper-relevant that third-turn Sulfur Elemental was, with the side-effect killing of Spirit en-Dal saving the Canadians about 8 damage, which could have given the Japanese the game.

In the aftermath, Cunningham said he liked Lost Hours better in Two-Headed Giant than in one-on-one, because 2HG decks enable more janky instant tricks that you will want to know about, and because you have more choice of who to target with it in hopes of putting their colors or land count a little out of reach.