Round 8: Tiago Chan vs. Ricardo Guerra 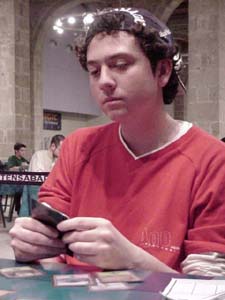 This is how things work out. After such a tough day Ricardo Guerra is 5-1-1. Which means a draw would probably see him through the second day. Tiago, on the other hand, is 5-2. Which means he needs to do two things: win, and pray for his tiebreakers to hold. By being paired down Guerra is forced to play.

Guerra came out with a second turn Seton's Scout followed by a Krosan Constrictor while Chan played a Looter. With the Portuguese locked at three lands the green creatures had a free reign of the Red Zone.

Dreamwinder put a stop to that, or at least to the Scout the Swampwalk on the Constrictor gave it enough security to attack. Chan's Looter finally cough up the goods in the shape of a Squirrel's Nest that would enable him to stall out the ground if he could only solve the Constrictor before it got out of hand.

Tiago (after activating the Looter): "I hope you are scared because I discarded a Muscle Burst..."

He tried to get a move on with Aven Fisher but Guerra was ready with a Krosan Archer to make sure the only evasion creature on the table was STILL the Constrictor. By now Tiago Chan was at six life and time was quickly running out for him.

On the next swing Ricardo added a Muscle Burst to finish the game. The Krosan Constrictor dealt sixteen points of damage during the game. In fact apart from two attacks from the Scout the Constrictor did it all by itself.

The Portuguese needed to win the last two games and he only had twenty-six minutes left to do it. So he came out smoking with Chatter of Squirrels and Squirrel's Nest. While Chan was going about being thematic Ricardo dropped a fourth turn Krosan Archer to slow things down.

A Possessed Centaur upped the ante from Tiago's side and Guerra took the chance to blow away the Squirrel's Nest with Rancid Earth before things got out of hand. Still blazing as fast as he could Chan dropped Aven Fisher hoping to keep up the momentum.

From the Spanish side came the now infamous Krosan Constrictor followed by two Roar of the Wurm tokens. Things were getting quickly out of hand for the Portuguese. Relentlessly the Constrictor charged on levelling the game.

But the Portuguese had a trick ready for this trouble: Cultural Exchange! Ricardo Guerra stared at it for a moment before deciding to let it resolve. After the dust settle Tiago Chan was now the proud owner of two Roar tokens and the Constrictor.

Guerra flashbacked the Chainer's Edict to stem the bleeding and his exchanged Constrictor died. With the tables now turned (almost literally) the Roar tokens continued to claim victims as mad chump blocking ensued.

The Spanish tried to kill the now Threshold fuelled Centaur with a Crippling Fatigue but Chan had Syncopate just waiting for it. It was a last gasp attempt to balance things out. Between the two tokens and the Possessed Centaur there was little or nothing Guerra could do.

With less than ten minutes left in the round they shuffled up for the third game. Guerra came out like a ton of bricks with a Basking Rootwalla followed by Werebear and Twigcrawler.

Against this brutal start Chan could do little more than Chatter of Squirrels, Millikin and Narcissim. They were still both locked at two lands, surviving with the help of Millikin and Werebear.

A Muscle Burst helped the Millikin take out the Rootwalla but the replacement Guerra played wasn't inferior: Nimble Mongoose and Seton's Scout. The Millikin helped Chan reached Threshold and he played Werebear followed by Possessed Centaur somehow finding light at the end of the tunnel with the clock winding down.

As time ran out Chan had the game almost under control but his opponent was at an impressive fifteen. Even with Narcissism, Centaur and a huge Werebear things looked grim for the Portuguese. From the second the clock stopped the players, and in fact the whole crowd, breathed a sigh of relief.

We were now back to normal speed, with both players having all the time in the world to figure out how to win the game. Chan dispatched the remaining targetable blocker with a Morbid Hunger and sent his two monsters in.

Ricardo couldn't top deck any last ditch blocker and from out of the blue the Portuguese pulled the seemingly impossible win. Now all he needs to do is pray his name survives the tiebreakers lottery. After the game they talked about the games and Ricardo wished Chan good luck assuring him he wasn't even intended to stall. If he had played more slowly in the second game it was only because he was holding an Upheaval.