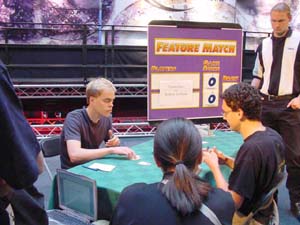 For the first Feature Match of the second day we have two Magic "old-timers". Tommi Hovi, the first player to win two Pro Tours ad Raffaele Lo Moro, one of Italy's most recognizable names, with a Worlds Top 8 to his credit.

Hovi kept a one-land hand but still came out faster with turn two – and turn three - Glory Seeker. Lo Moro answered with a morph and Erratic Explosion on a Seeker.

Tommi found a third land to play a morph but Lo Moro had smelled the blood on the water. He unmorph Shaleskin Prowler to destroy the lone Island across the table. Unfazed, the Finnish player found another Plains and dropped Wingbeat Warrior and kept attacking.

At twelve Raffaele sighed. He needed to stop the bleeding. A Torrent of Fire on the morph seemed to help but Tommi Hovi was having none of that nonsense. He calmly topdecked yet another Plains and dropped a rare called Dawn Elemental.

Not to be outdone the Italian answered without breaking stride: Pinpoint Avalanche. Hovi paused... surveyed the table and played a morph. When Lo Moro blocked, he unmorphed Frontline Strategist to win the battle.

Raffaele played two blockers to stop the horde but the next swing brought him down to six. With machine-like precision the Finnish player dropped Soldier after Soldier has Lo Moro did his best to survived.

A Frozen Solid stopped the flyer, but there was no denying Hovi's white weenies. Eventually they proved to much for the veteran Italian.

Again Hovi came out with second turn Seeker, but this time Lo Moro was ready with Flamewave Invoker to trade on the next combat step. They both followed with morphs and Tommi thought long and hard about is next attack. 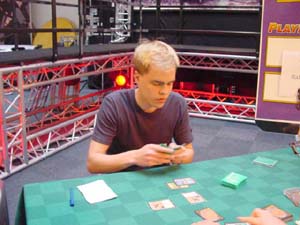 Eventually he sent his morph in and Lo Moro let it through. He played another morph and decided not to block incoming one. As it turns out it was Skirk Commando. Out went the first morph: Echo Tracer.

That seemed to slow Hovi a bit. Lo Moro seized the opportunity to played Frenetic Raptor and Hovi answered with a somewhat smaller Noble Templar. The Italian was in a hurry and a Torrent of Fire took the Templar out of the way.

The Raptor attacked and Hovi went down to twelve, as the Commando traded with a morph. Lo Moro's next creature – Goblin Brigand – died the same way, although Hovi saved the morph (Frontline Strategist).

The Finnish was in deep trouble, as Lo Moro replaced each dead creature with a bigger problem. He took down a Charging Slateback on the next swing but fell to six in the process. The Raptor was eating chump-blockers with amazing speed.

Eventually Hovi ran out of delaying measures and was forced to pack his cards.

They retouched their sideboards in deep silence, going back and forth between cards looking for the extra edge. Lo Moro was especially undecided, needing to ask the judge a question and staring at the last cards of the deck with unquieting intensity.

Hovi's starting hand wasn't easy. He only had two Islands as lands and a lot of White cards. Still, he decided to stick with it and by turn three he had a Plains to play out a morph and by turn four he had a second Plains to drop Mistform Ultimus. 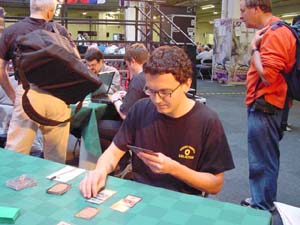 Lo Moro started with two Flamewave Invokers. With the ground clogging up Hovi went up with Gustcloak Harrier. In a hurry to get things going Lo Moro brought down a Torrent of Fire on the Ultimus and sent the twins in.

Hovi returned the favor and dropped a second Harrier and Glory Seeker. The race was on. Tommi ignored the incoming Invokers and sent his whole army in. Lo Moro stared at them and walked right into Frontline Strategist losing two blockers. Which obviously drew some Italian words from Raffaele.

With the game tied at twelve, Hovi played another morph and jokingly placed his lone untapped Plains on top of it. Raffaele called his bluff by attacking with everything and the Finnish player smiled. He did indeed have another Strategist.

His next attack brought the despairing Italian to five and Hovi had enough flyers to finish things on the next turn. Raffaele Lo Moro sent his whole team in, Hovi blocked, the Italian shrugged and extended his hand.