Round 8: Tomoya Yamano vs. Kunisato Ebie 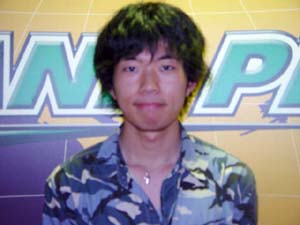 Kunisato EbieGrand Prix are usually the undercard player's first brush with greatness. Today, both Tomoya Yamano and Kunisato Ebie are in search of that glory, and are doing a fine job of it. Both stand at 7-0, looking to complete the perfect day. Ebie is with mono-black control. Yamano is running blue-green madness.

Yamano won the die roll and got things started quickly with a Careful Study that pitched Wonder and Careful Study. He held back on his Mongrel while Ebie made a Nantuko Shade. The Mongrel came down and made ready a Circular Logic to stop Rancid Earth.

Ebie fetched swamp with Tainted Pact and played Chainer's Edict. Yamano chose to lose his Wurm. He played another on the following turn while the Mongrel smashed in. He pushed this wurm in front of the Shade, forcing Ebie to tap out. Still it seemed that Yamano was on the back foot. He made an Aquamoeba and punched again. Ebie attacked and Yamano blocked. Ebie pumped after damage was on the stack. Yamano rescued with Aether Burst. The way was clear for Chainer's Edict to take out the Mongrel.

The Aquamoeba came back down. The Shade hit, and was joined by another. Rancid Earth took out the forest. They traded hits, with Yamano's Aether Burst buying him a bit of time. It came down to Ebie's two Shades and six land versus Yamano's three islands, Aquamoeba and Rootwalla. Yamano was at ten. Ebie was at five. Yamano let it through. Ebie dealt four. Then he played Laquatus's Champion. Yamano scooped.

What Yamano failed to see what the applicability of the third Aether Burst in his hand. He was so focussed on surprising Ebie when he tapped out to pump his Shades that he missed that he could respond to the Champion's lose life ability by bouncing it, putting the gain life ability on the stack first. What makes it all the sadder is that the other card in his hand was another Rootwalla. He could discard it into play at end of turn, then untap and pitch whatever card he drew, attacking for exactly five.

Yamano kept a two forest, two Mongrel hand that was otherwise occupied with blue cards. His Mongrels fell to a pair of Edicts and Nantuko Shade was soon on his case. He found an island and busted out Cephalid Looter. Ebie came down hard with Braids, Cabal Minion.

All was not lost for Yamano. He made a Wild Mongrel and passed it back, having drawn a second island. That meant that he could EnvelopRancid Earth and Aether Burst Braids at end of turn, taking minimal damage from the Shade. The Looter gave him nothing to add to his board, however. Braids came back down unimpeded. Yamano kept playing land, leaving himself with just Grizzly Fate in hand.

On Ebie's next turn, he swung with both of his creatures. Yamano traded his Mongrel for Braids. Ebie was ready with a replacement. Yamano Looted in response and lucked into Circular Logic. His next draw was the fifth land he needed for Grizzly Fate. Ebie felt the pinch, trading his Shade for three of the bears and Blooding away the last. Yamano drew and played his sixth land, swinging with the Looter and getting ready to flash back his Fate. Ebie dropped his sixth swamp and played Laquatus's Champion. Yamano checked his life: six.