Round 8: Tsuyoshi Fujita vs. Jens Thoren 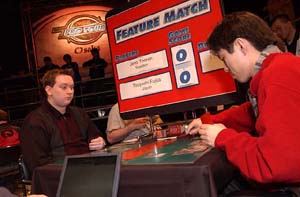 I think we're going to see a lot of this matchup today. There was a fair diversity of decks that showed up on day 1. Mono-green Squirrels was all the rage and various black-green and black-blue decks came in highly touted. However, after seven rounds of Swiss there appear to be two main decks. Sure some people had some success with blue-black and blue-red-splash-black, but it's really all about Blue-Green and Mono-Black.

Fittingly, the two players who escaped Day 1 with perfect record were running a Blue-Green deck (Tsuyoshi Fujita) and a Mono-Black deck (Jens Thoren). Their round 8 feature match was not just a clash of rising stars, not just a clash of wills bent on returning to the Top 8, but also the first skirmish in a pitched battle sure to be waged all weekend long. Which deck really is the best Odyssey-block constructed deck? 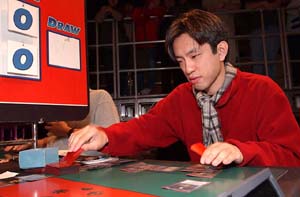 Game 1 went just the way Thoren wanted. His Chainer's Edict dealt with Fujita's early Mongrel and while Fujita did discard a Roar of the Wurm as a response just to get it into the graveyard, Thoren had a Shambling Swarm that he was able to trade for the Wurm token. Mind Sludge then cleared out Fujita's hand and Nantuko Shade came down to start dealing out damage. Fujita top-decked Compulsion, but the Shade put him in chump-block mode almost immediately and he conceded as a response to Haunting Echoes – he didn't want Thoren to get to see what tricks he had for games two and possibly three.

Fujita took out his Spellbane Centaurs and brought in Nantuko Blightcutters from his sideboard. His draw in game 2 was about as good as he could hope: turn 2 Mongrel, turn 3 Blightcutter, turn 4 Roar of the Wurm, turn 5 Persuasion (stealing a Nantuko Shade), turn 6 Roar #2. Thoren had an Edict for the Mongrel and then a Mutilate for the Blightcutter and his traitorous Shade. However, he couldn't deal with one Wurm token, much less the two that actually came out to play. The whole game last maybe 90 seconds as both players clearly knew their decks and the matchup so they didn't need to stop to think about much. 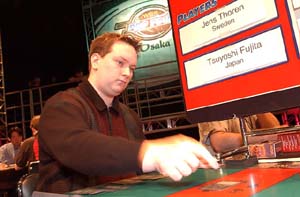 Game 3 began with the same dance as the previous two games: Thoren had an Edict to dispatch Fujita's early Mongrel, but Fujita got to discard a Roar of the Wurm as a response. The rest of Game 3 wasn't all that interesting, though, as Fujita stalled on two lands and Thoren dropped him down to one with a painful Rancid Earth.