Round 8: Tsuyoshi Fujita vs. Tobey Tamber 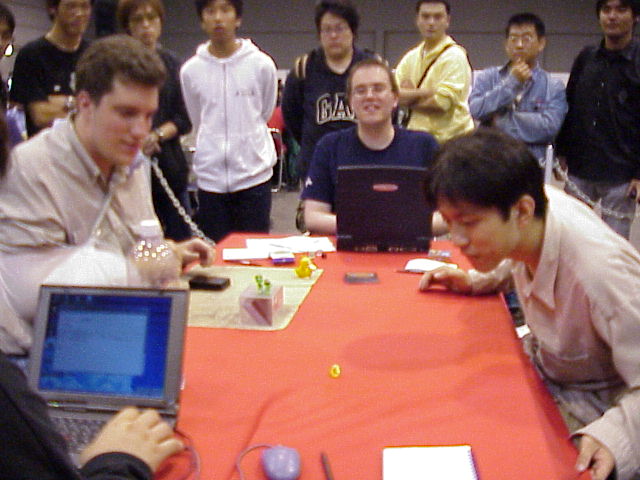 In all seriousness, Day 2 is on the line here, and the two contenders are undeniable superstars. Tsuyoshi Fujita, finist at PT: Tokyo and owner of a winning record at the 2001 Invitational, has earned wide fandom for his tight play skills and elegant good looks. Tobey Tamber, Top 8 APAC finalist and Asian Grand Prix fixture, is no stranger to success either.

Tamber came to the table bearing strange aliens, Psyduck, and an injured arm. He was in pretty high spirits; he had done well despite playing a deck he described as a 'pile'. Fujita was all business. Tamber tried to roll the higher number with a glass bead, much to the amusement of the crowd. Picking up the twelve-sider borrowed from the audience, he won, and made Fujita play first.

Fujita stalled at two land for two turns, but by that point Tamber had already cast Aven Fisher. Fujita then untapped his Ravaged Highlands and dropped Leaf Dancer. Tamber answered that with a Rabid Elephant and swung with the Fisher. Fujita's freshly played Sandstone Deadfall might have offered a brief respite from the Elephant, but at the cost of losing precious land. Just in case Fujita might do something to his initial pachyderm, Tamber added a second to the table. The resulting fat was too much for the Japanese idol to handle. 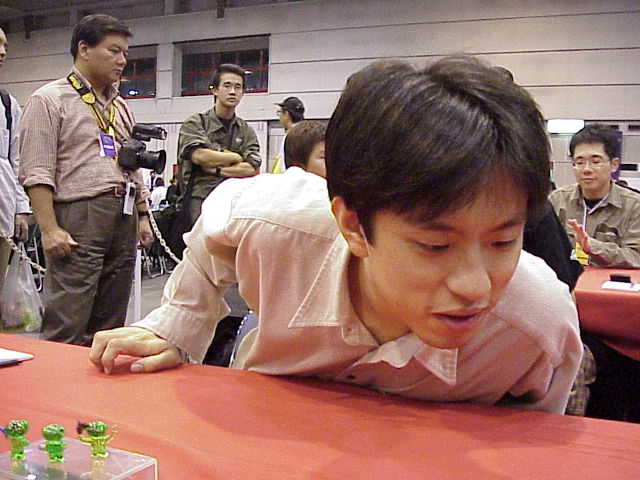 Tobey gasped and stage whispered to the crowd that it was his first game one win all day. He also commented that he was playing at a major disadvantage since he was using his bad right hand to cast spells.

Fujita opted to play first. His hand was Rabid Elephant, Nantuko Disciple, Escape Artist, Aven Fisher, Springing Tiger, and two plains. Conventional wisdom says that this hand should mulliganed on sight. Fujita, perhaps feeling lucky, ran with it. Tamber kept his hand as well, and played a Diligent Farmhand, who was given a chance to do one point of damage before being sent packing. 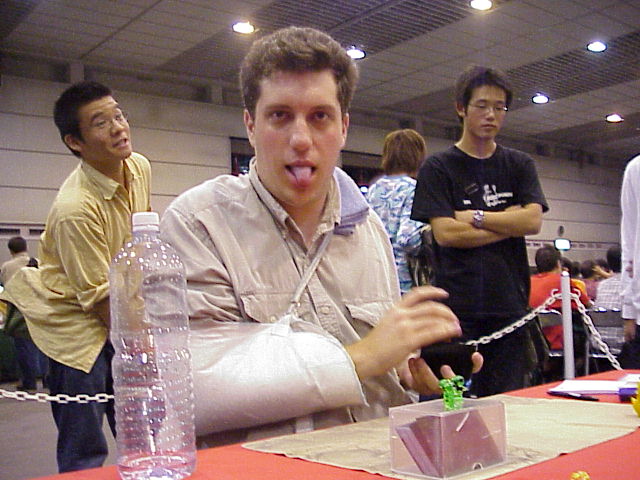 With mutterings about the previous match, Fujita again suffered the indignity of mana screw. Tamber used this window of opportunity to drop an Aven Fisher. Fujita recovered from screw by dropping a Plains and Hallowed Healer. Tamber threw a Psionic Gift at his Aven Fisher, who attacked and suddenly seemed smarter than Fujita's Aven Fisher. Tamber dropped a Rabid Elephant, and Fujita made sure the second Elephant to show was his own. Tamber attacked to bring Fujita to 13, and dropped a big Crashing Centaur.

All Fujita could do to stop this offensive was with Springing Tiger. Tamber kept sending his Rabid Elephant and Crashing Centaur. Fujita was helpless against the unstoppable fatties. A Repel helped Tamber hit threshold and trample through the last few points for the win, edging into Day 2 at sixty-fourth place.

This match was brought to you by Tobey's little Psyduck, who wants to shout out "Hi, Pei Shin!"