Round 8: Venga Venga Carta Roja vs. Two on Three 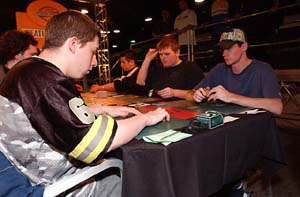 Many had pegged the Latin American invasion of Worlds last year in Sydney as a fluke, but Ostrovich and Romao have proven they're the real deal. They've especially made their mark tearing up the Grand Prix circuit lately, and Romao was a draw away from making Top 8 at Worlds for the second time in a row last month in Berlin. Along with Grand Prix Santiago Champion Matias Gabrenja, they're not a team to look past, and could certainly be playing tomorrow. On the other side of the table is a team featuring two of last season's breakout stars, Gabe Walls and Jordan Berkowitz. Both made their mark at Nationals by placing in the Top 8, where Walls defeated Berkowitz. Despite some pretty intense trash talk in that match, they're friends, and teamed this weekend with Mike Hron, a player who may not be as well known to the average Sideboard reader, but has plenty of respect from his Pro Tour peers as a talented competitor.

Gabrenja mulliganed down to five and got stuck at four lands. His Mistform Seaswift got through for some damage, but Hron unmorphed Bane of the Living to kill all of Gabrenja's creatures, except for a newly morphed Wall of Deceit. Gabrenja stayed in the game by using Frozen Solid to stop Elvish Aberration, while the Wall was able to deal with Bane. Hron played Krosan Groundshaker, and Gabrenja played a less impressive Coast Watcher. Berserk Murlodont came out to make the Groundshaker even better, and it trampled over for the win. 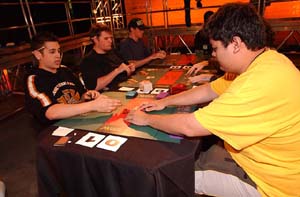 Ostrovich's draw was great, as he played Deftblade Elite, Stoic Champion, and Windborn Muse. Walls's Aven Soulgazer died to Skinthinner, while Ostrovich's side continued to improve with Vile Deacon and Daunting Defender. Walls summoned Dragon Mage and got to see seven new cards but wasn't able to catch up on the board. In game 2, a 3/3 Aven Warhawk along with Zealous Inquisitor and a key Pacifism helped Walls even the score at one game apiece.

Romao started off his first game fast with Goblin Brigand and Unspeakable Symbol, while Berkowitz made a 3/3 Embalmed Brawler, then summoned Undead Warchief. The Warchief made his side dominant, and Romao was never able to stabilize. 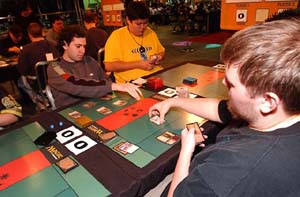 Game 2 was much different for Romao, as he got a blazing fast start with Carrion Feeder, Goblin Brigand, Flamewave Invoker, and Unspeakable Symbol. Berkowitz summoned Zombie Cutthroat and Synapse Sliver, but Romao was easily able to bust through. In Game 3, Romao's black-red deck had smaller creatures in the form of Goblin Turncoat, Goblin Brigand, Flamewave Invoker, and Carrion Feeder. Berkowitz had Riptide Mangler, Zombie Cutthroat, and Synapse Sliver, making his side of the board simply bigger. Echo Tracer put Berkowitz further ahead, and Clutch of Undeath on the Cutthroat gave him the threat to win the game, match, and put Two on Three ahead.

Knowing that his team was down a match and he needed to win the next two, Gabrenja looked at his opening hand and put his hands on his face, and leaned up as he let up a groan, sending it back.

Ostrovich played Zealous Inquisitor, and Walls had a Gustcloak Harrier. Morphs came out on both sides on turn 4, and Walls made a 3/3 Aven Warhawk. The damage clock in the air was now five, and Ostrovich blocked Walls' morph with a Vile Deacon to slow down the assault. A trade did occur, but Walls used Enrage on one of his fliers to deal 5 extra damage and bring a win much closer. Skinthinner flipped over and killed the Warhawk, but it wasn't enough. Hron won his match as well, giving Two on Three the win in a sweep.