Round 8: We Cannot Have a Vampire Gap!

Would You Do Zis?' came from Nassif," noted the notoriously grumpy Rich Hoaen. "We were all at efro's house for the last week and Nassif just kept saying that phrase, so we stole it. Then we played Nassif's team yesterday and Nassif was like, 'Why would you?'"

Hoaen is teamed up with a pair of Swedes this weekend in the equally grumpy and no less amusing Anton Jonsson and Pro Tour-London Top 8 member Johan Sadeghpour. Sitting across from Rich and company are Tim Aten's former children from :B, Gadiel Szleifer and John Pelcak. 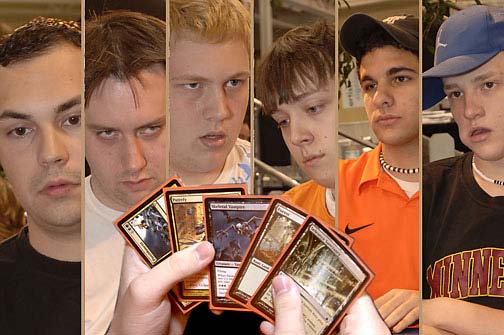 Only three would emerge victorious from Round 8.

When they were cast off by Aten earlier last year, they decided to tap another child as Aten's replacement in Taking Back Sunday teammate Chris "Star Wars Kid" McDaniel. The team couldn't come together for Grand Prix-Madison, but Pelcak and McDaniel still got a Top 4 with Jon Sonne in Gadiel's stead. They finished 6-1 Friday and are hoping to repeat their Top 4 finish from March with another solid performance here Saturday.

Hoaen had to mulligan his first hand, but his Rolling Spoil smashed Star Wars Kid's Golgari Rot Farm. Another land and a Signet, plus Selesnya Sanctuary for Star Wars let him cast Loxodon Hierarch, but a pair of Wrecking Balls plus Compulsive Research kept the mana situation dire for the Virginia boy.

Skeletal Vampire from Hoaen met a Putrefy, while he drew a few more cards via another Compulsive Research. Star Wars Kid was clearly on the back foot in this match, while Hoaen was just trying to find enough sources of damage to finish him off.

"Must be unreal…" Hoaen said, as the Kid cast the Crime half of Crime//Punishment targeting Hoaen's Indrik Stomphowler, a huge play since Hoaen had just cast Debtors' Knell. "It is," noted the Kid.

Savage Twister for four cleared the board minus the Kid's stolen Batman, but he rebuilt his own fledgling undead army with another Vampire only to see it Putrefied before it could bring the beats. Hoaen cast his own Vamp a turn later only to see Star Wars mimic his play from a turn previous and ship it to the graveyard. Grave-Shell Scarab for Star Wars Kid added another beater to the board before Angel of Despair ended Game 1 out of favor for His So Grumpiest.

Hoaen couldn't be too terribly unhappy though, since his ringer Swedes were both up a game in their matches against Pelcak and Szleifer.

Somehow while Rich was shuffling we got to talking about his teammates' faint accents in their otherwise fluent English. "Anton's J's... they are always "Y's" He doesn't have the J's in him."

"Yeah, we had a discussion about Yeorge W Bush the other day. That was a nice one," Hoaen chuckled.

Hoaen got off to a quick start with a turn-two Farseek, while Castigate from the Kid stole Compulsive Research from Hoaen's hand, revealing Carven Caryatid, Putrefy and more land. Aside from Carven Caryatid, there was no further action in the game until Hoaen decided to blow Star Wars out by casting Wit's End, making him discard six winners, including three Crime//Punishment. There were further spells after that (including a Skeletal Vampire that did the janitorial work), but Mind Twisting your opponent for six in the control-on-control matchup is some good, ya' hear?

Pelcak had been dispatched rather quickly in the round, leaving he and Sadeghpour to play spectator as Jonsson mulliganned to five against Szleifer in Game 2. Jonsson managed to make a huge comeback in that game, and won the match for Why Would You… on turn two between Hoaen and the Kid, as they both cast dueling Signets.

Star Wars Kid Putrefied Hoaen's Signet to try and stay ahead of any Rolling Spoils for an extra turn and then used Castigate to make certain none were coming, finding none and removing Indrik Stomphowler from the game. Hoaen eventually found himself on the wrong end of Debtors' Knell recursion, and both players fiddled with Skeletal Vampires and their batty friends for a bit before Hoaen decided that a smoke break between rounds was the better part of valor.