Round 8: What Do You Do When You Tap a Fallowsage?

Round 8 sees Katsuhiro Mori, back off his suspension from earlier in the year, and ready to battle, undefeated up to this point.

Both players started out with nothing but islands. Mori had Stonybrook Angler on the play, while Silvergill Douser came from Huber. Next up it was Merrow Reejerey from Mori, compared to an Angler for Christoph. Being on the play really helped Mori, who could apply pressure with his Reejerey tapping down opposing Merfolk as more of his own hit the table. Streambed Aquitects joined his side of the board, leaving Huber the first to stutter on curving out, using Ponder before passing. 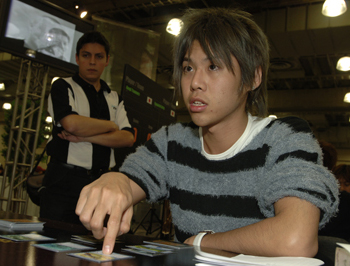 Katsuhiro Mori makes his point.Katsuhiro had a Forest, the first non-Island land of the game, and after attacking Huber to 13, he dropped Merrow Harbinger, fetching out a Fallowsage. Huber was still on the defensive, using his two creatures to hold back attacks as best he could, but he still dropped to 9 on subsequent attacks. Mori's Fallowsage was hit with Broken Ambitions, revealing a Fallowsage on the top of Huber's deck, who soon made it into play. It also milled Dreamspoiler Witches into Mori's graveyard—suggesting that there might be more to his deck than had shown up at the start of this game.

Merrow Harbinger and Streambed Aquitects continued to bash for Mori, who was still going with flashy Merfolk, playing a Surgespanner next. Huber's response was a Judge of Currents—a much-needed source of life as he sat on just 6.

Mori attacked with his Aquitects, Harbinger, and Surgespanner, using Surgespanner's ability targeting Huber's Fallowsage. Huber triple-blocked Surgespanner before using Silvergill Douser to prevent some damage and Stonybrook Angler to do so again. With Judge of Currents' lifegain included, the attack didn't cost him any life at all.

Unfortunately, losing the Douser meant that the life would be lost soon thereafter. Mori's attacks the following turn bounced Stonybrook Angler and took Huber to 1. While a Neck Snap dealt with Surgespanner, it was not enough. Huber was quick to scoop up his cards and head on to the next game.

A turn-two Deeptread Merrow from Huber, to no creature from Mori looked good for the Swiss player, and his lead was compacted with a Broken Ambitions to stop Merrow Reejerey from Katsuhiro. It didn't get win the clash, but definitely helped on tempo. Huber had a Reejerey of his own, and cracked in for 3 while Mori's board remained empty.

Thanks to Secluded Glen being his only blue source, Mori wasn't in as bad shape as he could have been in the face of the Deeptread Merrow, but he just had Lignify for Reejerey, without any actual board position of his own.

Huber played Mulldrifter, to which Mori had a Merrow Harbinger, fetching Wings of Velis Vel. There would need to be a fight back from Mori, who was down to 11 without having had a chance to attack.

A Dreamspoiler Witches allowed Mori to kill of the irksome Deeptread Merrow with those Wings, and Katsuhiro rumbled in before playing out Surgespanner. Could he come back from the slow start? Huber played a Fallowsage, rather hoping that the answer was no. He had Stonybrook Angler to slow down Mori's offence, but lost his Fallowsage to a Surgespanner bounce when the attack step rolled around. A Weed Strangle then took care of Stonybrook Angler, though it did reveal a mildly concerning Silvergill Douser on top of Huber's deck.

The Douser was soon in play along with that Fallowsage, who Mori again chose to bounce on his attacks. This turn, though, Mori had a wicked follow-up in the form of Garruk Wildspeaker, who promptly brought a Beast token with him. Huber attacked the planeswalker with Mulldrifter, and Mori declined to block with his Dreamspoiler Witches. Garruk went away, and Huber played a Veteran of the Depths, threatening a messy combat sometime in the not-too-distant future. 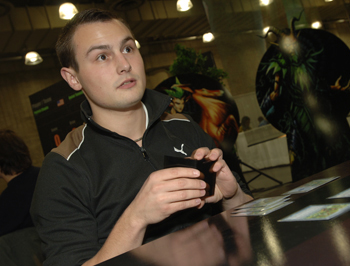 Christoph Huber is awake!With Christoph virtually tapped out, Katsuhiro played Incremental Growth, making his Dreamspoiler Witches 3/3, his Merrow Harbinger 4/4, and his Surgespanner a colossal 5/5. Just the Surgespanner then ran in, bouncing Silvergill Douser. It didn't get through, but its work was done.

The following turn, there was a slightly bigger attack, again bouncing that Douser. It wasn't enough to finish Huber though, and a Lash Out on Mori's lone blocker was enough to secure a lethal swingback for Christoph, who had forced Mori to play aggressively to fight back after a slow start.

With just thirteen minutes left on the round, the third game started briskly, but looked likely to end up stalemated as Stonybrook Angler met Silvergill Douser. Huber had an Angler of his own to join the Douser, while Mori played Merrow Harbinger to find Fallowsage—a threat that didn't really care about either of Huber's controlling merfolk. Huber played Merrow Reejeray and passed. This was swiftly hit by Lignify from Mori.

An Ameoboid Changeling joined Huber's team, while Fallowsage joined Mori's. When Christophe tried an Oblivion Ring, Mori responded by tapping his own Fallowsage with Stonybrook Angler to draw a card. The sage then got sent to Oblivion, though there were still not any good attacks for the Swiss player.

Mori dropped Guile, who would be a formidable attacker, even if it did go through a lot of tapping and untapping with Stonybrook Anglers on each side of the field. Silvergill Douser was more of a concern, as it soon worked out that there were enough Merfolk for Huber to just prevent all the damage from the Elemental. Gilt-Leaf Ambush from Mori revealed a Fallowsage to be top of Huber's deck—quite the concern for Katsuhiro.

Huber's Wall of Fish was enough to shut down Mori's attacks even when Incremental Growth built up Mori's creatures. With just three minutes left on the round, a draw looked more and more inevitable.

At the point time was called, Mori had gotten Christoph down to 11 but had only two turns left to attack with. When Knights of Meadowgrain started attacking for Christoph, this looked all the tougher. Mori tried a Pestermite, but was stopped by Broken Ambitions, which milled Mori for a Peppersmoke and three lands.

Mori's attacks whittled down Huber's life total a small amount, but on the very last turn he could attack, Mori still had 11 to do thanks to that pesky Knights of Meadowgrain. His board easily had that in power, but with the Douser around, he just couldn't force it all through.

There was no way that Huber was able to get in enough damage either, and the game ended in a draw