Round 8: Wild at Heart

"Why am I at the feature match table? I'm nobody!" Tom Martell exclaimed as he sat down to the final round of competition on Day One. He was being a bit hard on himself, considering that prior to the Last Chance Qualifier Thursday he wasn't even qualified for the Pro Tour. His opponent for the round, Matt Sperling of California, was a pretty consistent member of the Tour and both were guaranteed to play on the second day at 5-2. They were battling to start off in a solid position for Top 8 at 6-2, though one would inevitably have to battle at the considerably worse 5-3. 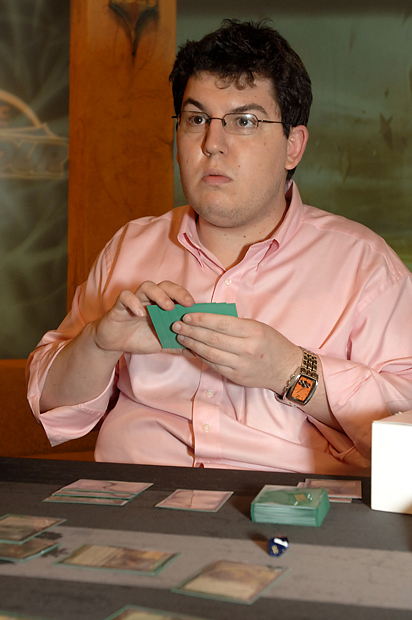 Despite his humility, newcomer Tom Martell is one to watch.

Bloodthrone Vampire was the first creature to the table, and it came from Matt Sperling. He had a third-turn Transcendent Master , and when Tom missed his third land drop and had to discard, it did not look good for him. He hit the land the following turn, and was able to use Induce Despair to take out the 3/3 leveler. Wildheart Invoker took its place on the battlefield for Sperling while Tom cast Gloomhunter , his first creature of the match.

The 2/1 flyer traded with Sperling's Bloodthrone Vampire , but a Daggerback Basilisk joined Matt's team, and it didn't look like Tom Martell was going to be able to stay in the game much longer. A turn later, when Matt attacked with his Invoker and Daggerback with exactly enough mana to activate the Invoker's ability, the two were on to the second game. 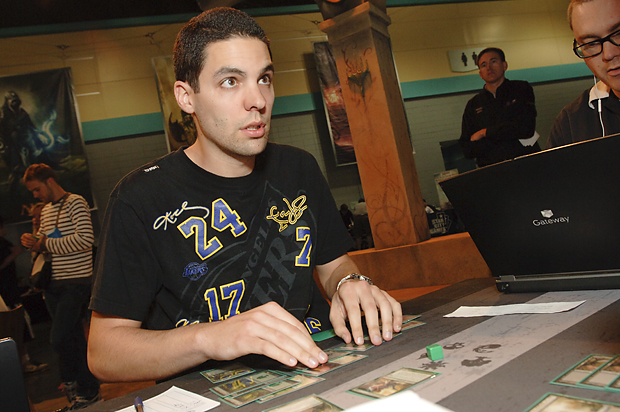 Both players used Growth Spasm to accelerate their opening draws, but Matt Sperling was first to the battlefield with a creature in Wildheart Invoker . The 4/3 was a pretty powerful threat, but Tom Martell had an answer in Dread Drone . When Sperling cast Mammoth Umbra on his creature and attacked, the 7/6 with vigilance gave Martell pause. He decided to chump with a Spawn token rather than eat that much damage, and Matt passed the turn.

Bloodrite Invoker and Overgrown Battlement weren't enough from Tom to prevent the monstrous Wildheart Invoker from getting in, and when Tom chumped with yet another Spawn Matt had enough mana to pump, trampling through for a whopping 10. That put the life totals 20-9 in Sperling's favor, and Martell's demise seemed imminent.

Essence Feed helped undo some of that damage for Martell, bringing it to 17-12 though he was still behind. He also cast Arrogant Bloodlord but still didn't have enough power on the table to take out Matt's attacker if it was pumped. Sperling sent, and the Arrogant Bloodlord ate enough damage to leave Martell at 4.

Tom had what looked like a single turn left to mount his comeback, and he gave it a valiant effort. Jaddi Lifestrider hit, and tapped six creatures to gain 12. That put him at 16 and gave him a 2/8 blocker to soak up more of his opponent's massive attacker, but he still didn't have an answer and fell to 12 on the next attack. What was left in Tom Martell's deck that could deal with a Mammoth Umbra –enabled Wildheart Invoker and an opponent sitting on eight mana?

Picking up his top card from his deck, Martell surveyed the battlefield, then passed the turn with no play. If he had more than a bluff, he was going to have to use it on his opponent's turn. Sperling sent yet again, and Overgrown Battlement stepped up to chump. Before damage, Tom activated Bloodrite Invoker essentially preventing 7 points worth of his opponent's 12 point attack (3 from the life gain on the Invoker, and 4 from the block by the Wall). Martell was at a measly 7.

The next lumbering assault from Sperling forced Tom to block with all of his creatures, and left him with only three Spawn tokens and an opponent with multiple fatties, including a postcombat Ulamog's Crusher . Martell was down to his final draw and found ... nothing. He extended the hand in defeat to his opponent.