Round 8: William Jensen vs. Ben Rubin 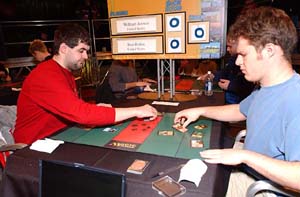 Jensen and Rubin are young but experienced veterans of the Pro Tour who grew up with the game. Jensen is best known as a limited expert, and Rubin has had two Pro Tour finals appearances many years back, and also has two Masters championships under his belt. Both players arrived at today's rounds with 6-1 records, and are looking to start their day with a win.

Rubin played Sparksmith on turn two, and Jensen put down a morph creature. Wirewood Savage gave Rubin another great creature, and Lavamancer's Skill let Jensen's morph kill Sparksmith. This was followed by Riptide Biologist. Rubin used his turn to cycle Krosan Tusker, and Shocked the Skilled morph creature, which turned out to be Mistform Shrieker. The Biologist attacked for one point of damage, and Jensen went to the air with Ascending Aven. The Savage attacked back for two, and was joined by Symbiotic Elf. Jensen's Aven came over for three damage, and the ground was fortified with Mistform Wall and a morph creature, leaving Jensen with no cards in hand. Rubin used his turn to put two Wellwishers on the table, making him capable of gaining eight life a turn with the current board.

Battering Craghorn gave Rubin a card when it came into play, and Jensen's Aven was fighting an uphill battle of three damage a turn to Rubin's eight life a turn. Centaur Glade gave Rubin a huge threat, and once eight mana was reached the board was flooded with 3/3 creatures. 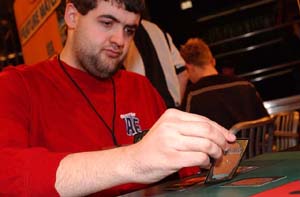 Jensen started off with a second turn Biologist. It was joined by Mistform Dreamer, and Rubin summoned Wirewood Savage. Jensen played Lightning Rift and cycled a land to kill the Savage, so Rubin played another one. The Dreamer continued to attack through the air, and Ascending Aven showed up to increase the clock to five damage. Wellwisher and Leery Fogbeast gave Rubin a bit more to work with, but Jensen had a significant amount of pressure in the air, and played two morph creatures after an attack. Rubin cycled Solar Blast to kill the Dreamer, and Shock brought down the Aven. Both of Jensen's morphs attacked, and Leery Fogbeast and Wirewood Savage teamed up to block one. It was morphed to reveal Skittish Valesk, and Rubin was left with Wellwisher as his only creature.

Symbiotic Elf was played, and Jensen attacked with his morph, which was unblocked and morphed before combat to reveal Battering Craghorn. A Dreamer made the board a little better. The Elf attacked back, and Rubin played a morph. Jensen's Craghorn and Dreamer attacked, and Rubin blocked the first striker with his morph, which was revealed to be a Craghorn as well. Damage was put on the stack, and Chain of Vapor bounced back Jensen's Craghorn; Vitality Charm saved Rubin's. At this point in the game, the ground was even and Wellwisher was gaining two life a turn to nullify Mistform Dreamer's attacks. Clone gave Jensen a second Dreamer, and he was now able to get through for two damage per turn. Sparksmith made Jensen's position even better, but Threaten stole the Sparksmith, and Rubin used it to kill a Dreamer. It was then sacrificed to Rubin's Goblin Sledder before it went back to Jensen's side. 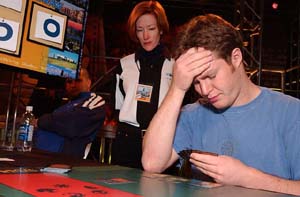 Things were now back to even, with the Wellwisher and Dreamer keeping each other in check. Wave of Indifference was used to let Skirk Commando get through, and it killed the Dreamer. Jensen finally found a cycling card, and used it to target Wellwisher, but Rubin sacrificed two Goblins with the Sledder to keep it alive. A second Wellwisher came out the turn after, and Jensen used Choking Tethers to clear the way for an attack, bringing Rubin to three life points and killing a Wellwisher thanks to Rift. Morphs butted heads, and the battle turned out to be Riptide Biologist to Snarling Undorak. Another cycling card killed the remaining Wellwisher, and both Biologists attacked to bring Rubin back to three. This cleared the way for a big Undorak attack, but Rubin was far enough behind to allow the Biologists were able to win the race.

Rubin brought out Wellwisher on turn two, and Jensen had Lightning Rift. The Rift took out a morph and Wirewood Savage, and Rubin tried to gain back some ground with Wirewood Herald and a Morph. Lavamancer's Skill made Riptide Biologist a machine, and it shot Rubin's morph. Rubin's shrugged and morphed it to reveal an Undorak, but Jensen simply played a second Skill on Snapping Thragg to finish the job. With three points of direct damage available to kill creatures every turn, things weren't looking very good for Rubin. Mistform Shrieker followed by a Clone of the 3/3 flier let Jensen win in convincing fashion.