Round 8: William Jensen vs. David Kearney 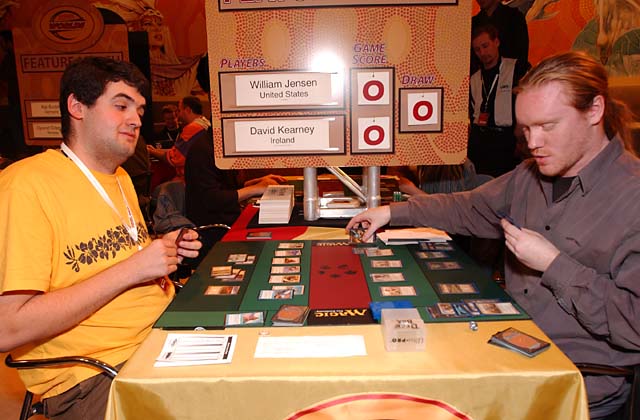 One of the big stories of Worlds is the remarkable performance of the Irish national team. John Larkin, David Kearney, and Cormac Smythwere first after the Standard day and put up a 3-0 mark in the first round of draft to pull 7 points clear of the field. Kearney, at 6-1, took on William "Baby Huey" Jensen in a round 8 feature match. Jensen hasn't actually won many events, but he always seems to finish in the money somewhere. Consistent Top 32 performances are often considered a more telling sign of true talent at Magic than occasional top finishes, even if it's the latter that look more impressive on a resume. Huey has spent a lot of time drafting on Magic Online in recent months so after he put on a 5-1 mark in constructed, many spectators think he could go all the way this weekend.

Kearney drew all three of his colors in game1 long before Huey could even find his second color or mana. Huey did manage to stall out the ground battle – with both players running a lot of white card there was a lot of toughness in play and the board kept growing more and more cramped over the course of the game. When Huey finally drew an Island he was able to put Ghostly Wings on Border Patrol and start attacking. Huey was able to follow up, eventually, with an Aven Flock and later an Aven Cloudchaser. Kearney, on the other hand, simply could not find any fliers. His first turn Mental Note had put both Soul Scourge and Battlewise Aven into the board and those were the only two he saw for quite a while. After thinking he had no chance in the early game, Huey seemed both happy and surprised when he was able to poke through 20 points of damage in the air. 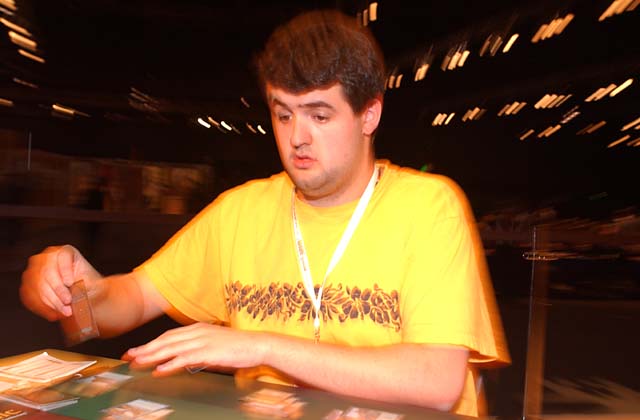 The mirror match stalemate continued in game 2, only this time the air was also full of tough creatures being left on defense. Flocks of avens just stared across at each other while each player tied to kill the other guy with Psionic Gift. Huey had a Cloudchaser Aven, so he was looking good in the Gift-race and Kearney needed a new plan. Kearney discarded four cards in an effort to sweep the board with Sickening Dreams. Suddenly everyone knew why he was splashing black, but Huey had the answer: Rites of Refusal kept the board all gummed up – just the way Huey wanted it. 9 "pings" later and one attack with a temporarily pro-white Mirror Wall, Huey had his 7th win of the tournament against just one loss.

Huey explained after the match that he knew Kearney had Sickening Dreams in his deck because Kearney had picked up Huey's Pilgrim of Virtue during game 1 and studied it very carefully. Huey knew his opponent had seen plenty of pilgrims, so why would he be reading it so carefully? Well, because he needed to know whether it would shut Sickening Dreams down or not, that's why. Kearney never did play Sickening Dreams during the first game, but he had telegraphed it loudly enough that Huey brought it that Rites of Refusal from his sideboard and that made all the difference in game 2. These are the sorts of subtle skills that can truly separate the good players from the great ones.