Round 8: William Jensen vs. Wolfgang Eder 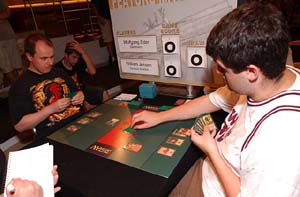 Wolfgang Eder is less well-known but he did make something of a splash this year when he placed highly at the European Championships with the original build of the Goblin Bidding deck that was later refined by Tsuyoshi Fujita into one of the most surprising Standard decks this year.

Jensen was playing red-green with a Timberwatch Elf and Wirewood Symbiote. If the deck goes into the late game he had both Wave of Indifference and Insurrection as finishers. Wolfgang was playing black-red and his deck topped out with Havoc Demon and Decree of Annihilation.

Jensen had the first play on the draw with Lightning Rift. Eder tested the waters with a morph and Jensen killed it with a cycled Lay Waste. Eder played his fourth straight Swamp and dropped a Death-Head Buzzard onto the table tentatively and Jensen played a morph.

Eder played his fifth Swamp and had no play, which raised an eyebrow across the table, "Interesting." Jensen got in for two points with his morph and played a Berserk Murlodant. With Jensen tapped out Eder cycled a Dirge and a Polluter but played another Swamp on the next turn.

Jensen attacked with his Murlodant and was surprised when the Buzzard got in the way. He was even more surprised when Shade's Breath made it into 6/5 and it killed the beast. Jensen shrugged and moved on playing out a Timberwatch Elf and a Wirewood Symbiote. He played an Elvish Warrior on the next turn and things were looking grim for Eder. 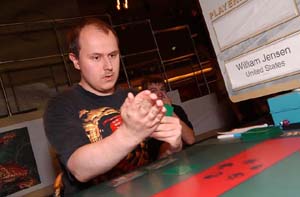 Eder finally drew a Mountain and played a Crested Craghorn. He thought for awhile about whether or not to provoke the Symbiote but decided against it and provoked and killed a morphed Bloodstoke Howler. With just two elves in play, Jensen was still able to put the full court press on and began to wipe out the German's team slowly and methodically.

The flavor text on the Symbiote? "It drinks fatigue."

Eder opened with a Boneknitter and a Smokespew Invoker but both were dispatched immediately with Spark Spray. When he cast Aphetto Dredging for zombies Jensen did not react and calmly played a Vorine.

Eder played the Smokespew but Jensen had a Shock and got in for three and played a morph. The Knitter was next and it blocked the Vorine while the morph got in for two. Another morph came down and then Eder played a Havoc Demon. Jensen provoked the Knitter and sent morph number two into the red zone. Eder blocked and discovered it was a Serpentine Basilisk and the board was wiped clean.

Eder regrouped with a Polluter—if he could get out ahead of Huey he had the Decree in hand—and Jensen frustrated him with Elvish Aberration. Jensen chose not to block and Eder added a grey Embalmed Brawler to the board. The elf mutant got in for four and a Treespring Lorian was assigned to watch the gate. 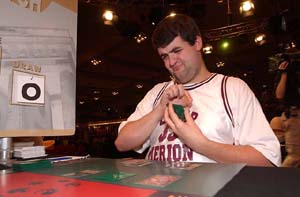 Magma Sliver and Severed Legion came down around a null turn from Huey. Jensen played a Wirewood Symbiote and was able to attack with the mutant then bounced and replays it.

Eder sensed his end was coming and after attacking with the Legion cycled the Decree and played a Swamp. Two turns later, Huey was able to play a Timberwatch Elf off of his mutant's mana producing ability.

Eder was whittling away with the Legion and looked like he might be able to pull it out but Huey ripped a third land and was able to end the game with a Wave of Indifference.

After the game, Jensen explained that he would have won the turn after the Decree with the Wave if Eder had tried to wait for a better situation to cycle it.