Round 8: Your Move Game vs. Aquamoebas Anonymous 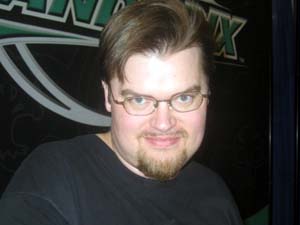 Move Games and Aquamoebas Anonymous were the only undefeated teams coming into the final round of a very long Day One. There was zero talk of a draw--both teams were assured of making it in and the winner would be in an excellent position to make Top 4 with only three rounds of play tomorrow.

Jon Stern was facing off against YMG's Kastle who's exploits are well chronicled. Stern has been a member of the Canadian Nationals team and has numerous money finishes to his credit including a Top 16 at Pro Tour Yokohama.

Stern led off with a Banshee's Blade. Elf Replica from Darwin was matched by Soldier Replica from Stern. Darwin attacked into the Soldier and he took two and followed with a Tel-Jilad Exile. Stern had Skullclamp and put it on his Soldier and aimed it at the red zone. Darwin debated the merits of killing it and allowing the Canadian player to draw two cards but let it pass unmolested. Stern had no other play and sent the turn back with two mana open.

Darwin swung with the Exile and added a Tel-Jilad Archers to his troops. Stern's Glavemaster picked up the Banshee's Blade but it was not going to keep Darwin's Archers from attacking. Glavemaster became a 3/3 before the Archers got to deal their own damage but Darwin was holding back a Granite Shard and finished off the annoying soldier. Stern Shattered the Elf Replica EOT and not the Shard--was he holding Arrest?

He was holding Specter's Shroud and wanted his creature to get through. "Yup, yup." Was all Darwin had when Jon played Specter's Shroud and triple equipped his Solider. "I could take four damage…" He chose not to block and fell to fourteen. He discarded an Echoing Courage and the Soldier grew to 5/4. Darwin attacked with his Exile and left his pro artifact spider back.

Jon Echoing Ruined the Shard and had no attack. "You have one card in your hand and that guy is a 5/4?" Darwin decided to Electrostatic Bolt the Replica and give Stern a pair of cards. He untapped and attacked for four. He added a Copper Myr to his board.

Jon played a Skyhunter Patrol and equipped it with the Blade and Skullclamp. Darwin used the mana from the Myr to manage a Rustmouth Ogre. Jon moved the Shroud over to his flier and passed the turn leery of the Rustmouth. Kastle played the startlingly good Goblin Archeologist. Neither player would commit to an attack and when the turn swung back to Kastle he tried to kill the Banshee's Blade with the Goblin but lost the flip. "I really want to destroy that Banshee's Blade…" and he cast Echoing Ruin. "And I really want to destroy that Skullclamp." Creeping Mold took out the other equipment leaving Jon with only a Specter's Shroud for his flier. Jon could only block the Archers and lost the Shroud to the Ogre's ability.

Darwin's next attack brought Jon to one. He was able to keep Darwin locked down for a turn with Blinding Beam but Darwin had a hasty Berserker and finished him off.

The other two matches were both going into Game 3.

Darwin came out with Pyrite Spellbomb and Goblin Archeologist sandwiched around Stern's Arcbound Stinger. Stern had a second Stinger and sent the first one across for one. Kastle played a Stoker and the mana-tight Stern played Silver Myr. Kastle had a Granite Shard to plink the Myr but it quickly fell to a Echoing Ruin before more damage could be done.

Darwin got in for three a turn while Stern was flying back for two but Darwin's Echoing Ruin got them both with one swat. Jon was falling behind quickly but had a Pulse of the Fields that came back to his hands and forced both players to be highly math conscious.

Neither player had much other action until Darwin played Tel-Jilad Outrider. Darwin mana burned for one at the end of Jon's turn to even out he life totals at fourteen apiece. Darwin attacked for five and when he went to his end step Jon added two mana. Darwin did likewise and they both burned for two. Stern cast Blinding Beam to keep Darwin's creatures tapped--he did not have enough mana to tap the Goblin as well. Jon grinned as he had to use Echoing Ruin on the Pyrite Spellbomb--Darwin could force him to lose the Pulse of the Fields if it stuck around. Darwin cycled to draw a card and Jon was able to use the Pulse to go to eleven while Darwin was at twelve. Darwin burned for two EOT, "This is stupid."

Darwin beat for one with the Goblin and they were both at ten. He then summoned a tricky Triskelion. Jon played a land that meant he could Pulse twice and both players went into heavy math mode. "Okay, there has to be some way I can do something cool here." After some thought Darwin grabbed his creatures, "Let's try the attack phase." 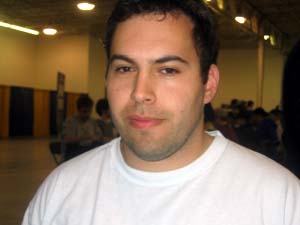 Darwin was ready to put ten damage on the stack and Jon had to use the Pulse without being able to get it back. When all the dust settled he was at four. He was left holding nothing but a Yotian Soldier and the game reached its inevitable conclusion shortly thereafter.

The relatively unknown Leary dispatched Shvartsman in their rubber game and Dougherty exacted revenge for it on Wolfman which made Darwin's victory the deciding factor in the match. With an 8-0 record Your Move Games was well on their way to another Top 4 appearance tomorrow.

1 Pulse of the Fields
40 Cards